ESPN’s Jemele Hill, a host of SportsCenter, has made waves this football season with her comments about President Donald Trump.

Now, she’s in hot water with her bosses again, as it was reported on Monday that she was suspended for two weeks for a second violation of ESPN’s social media policy.

ESPN announced the decision to suspend the host on Twitter on Monday afternoon: 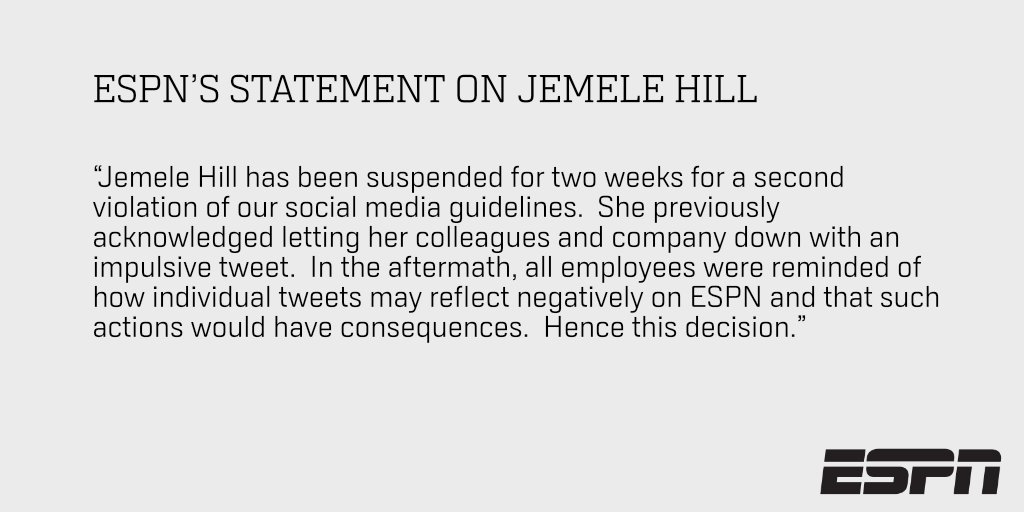 Obviously, with ESPN maintaining a close relationship with many of those same advertisers (and the NFL, as well), the Worldwide Leader felt it was in the company’s best interest to suspend Hill for two weeks.

Here are just a few of the things she said on Sunday night and into Monday about boycotting advertisers:

Or, how about not patronizing the advertisers who support the Cowboys? You can watch and do that, right? https://t.co/duPNqxFta7

This play always work. Change happens when advertisers are impacted. If you feel strongly about JJ's statement, boycott his advertisers. https://t.co/LFXJ9YQe74

Just so we're clear: I'm not advocating a NFL boycott. But an unfair burden has been put on players in Dallas & Miami w/ anthem directives.

When Hill’s comments took aim at companies that fund what ESPN does, the network decided to send a message with the suspension.