Georgia bounceback, Tennessee letdown could lead to upset in Athens

Tennessee is coming off arguably its biggest win in recent memory, finally ending an 11-game losing streak to Florida.

Georgia, on the other hand, needs to regroup after getting manhandled at Ole Miss. Not only did its secondary get shredded by Chad Kelly, but running back Nick Chubb is injured again and might not be available for Week 5.

“We are trying to get him back,” coach Kirby Smart said Wednesday, according to 247Sports. “We want him back bad, don’t know if he is going to be back. Based on (Tuesday), it is hard to say. He has to recover some. He is doing some running and putting a little bit of weight on it, but not much cutting.”

By all measures, the Volunteers are riding high. Undefeated and No. 11 in both major polls, coach Butch Jones and Co. have navigated a bumpy road thus far on Rocky Top. Their come-from-behind victory over the Gators should allow them to forget previous struggles against Appalachian State, Virginia Tech and Ohio.

As for the Bulldogs, that beatdown in Oxford knocked them from the cusp of the Top 10 down to barely in the Top 25.

But legendary coach Lou Holtz always said that you coach a different team every week. When dealing with young men eligible to vote in a presidential election for the first time, there are so many variables to consider.

The unstoppable UT squad we saw in the second half at Neyland Stadium might not got on the plane. Similarly, the lifeless UGA roster that couldn’t compete for four quarters at Vaught-Hemingway Stadium might be ignited by a return back home. We’ll only know for sure once this division battle is complete.

The winner grabs control of the SEC East. The loser will need some help in order to earn a trip to Atlanta.

The Vols must guard against a letdown. Trailing UF 21-3 at halftime, they unleashed a post-intermission onslaught — final score, 38-28 — that few of the 100,000-plus in attendance could have seen coming.

“Everybody says, ‘Oh, great adjustments,’ and all that,” said offensive coordinator Mike DeBord (above), according to 247Sports. “But there wasn’t any. We just said, ‘Hey, we’ve got a great plan.’ And Butch said it in the first half. He said, ‘Mike, we’re moving the ball. We’ve got a great plan. Let’s just stick with it,’ so he re-emphasized it, too.”

It’s difficult to overestimate just how much that dubious decade-plus spell to Florida weighed down the Tennessee program. The Volunteers had seemingly invented ways to lose over the years, snatching defeat from the jaws of victory on a few occasions. That dramatic comeback this past Saturday exorcised a lot of demons.

Emotionally, UT has to be running on empty. It will be quite a challenge for Jones to get his players up for the Dawgs.

Georgia, on the other hand, is ready to bounce back after laying an egg against the Rebels. They were totally dominated 45-14. Facing a big deficit early, too much was asked of freshman quarterback Jacob Eason.

While Eason is oozing with potential, he’s less than a year removed from high school and competing in the best conference in America. With Chubb not as effective lately, more and more of the offensive weight has been placed on Eason’s shoulders. Dropped passes and inconsistent blocking haven’t helped, either.

“These dropped balls are unacceptable for the whole receiving corps,” said wide receiver Michael Chigbu. “We can’t be doing that if we want to win. That has to change.”

The Bulldogs need to get back to running the ball and playing tough defense, which was Smart’s original plan.

Which Vols team will show up between the hedges? Truth be told, there has been more bad than good in 2016. Overtime against Appalachian State. Too close for comfort vs. Ohio. The Gators owned them for 30 minutes, too. 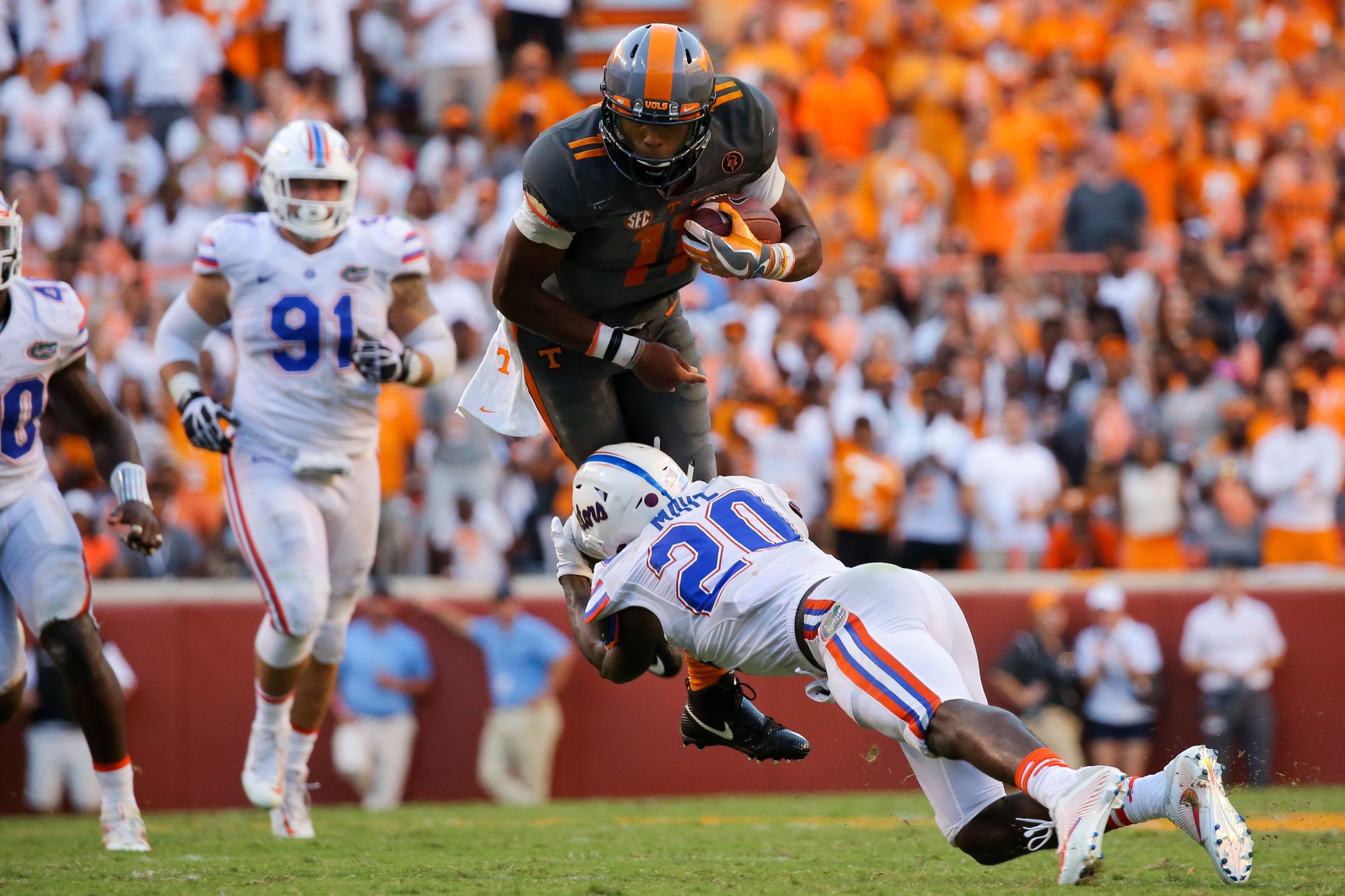 Quarterback Joshua Dobbs (above) is coming off career highs for passing yards (319) and touchdown passes (4). However, was that a breakthrough performance or a hot half? Remember, he threw a pair of interceptions early — both head-scratchers — before warming up later. Inconsistent pass catchers suddenly snatched everything in sight.

Also, UF’s first six drives in the second half resulted in five three-and-outs and an INT. Its defense had to have been gassed.

“I always show a ‘good, bad and ugly’ tape to the players,” said defensive coordinator Bob Shoop, “and I showed five straight snaps of Derek Barnett just taking the game over at the end of the third quarter and the beginning of the fourth quarter.”

Mississippi might have been the worst possible matchup for UGA. Kelly has too many downfield threats if given time in the pocket, and the Dawgs aren’t a great pass-rushing team at this point. Kelly was all too comfortable.

With the Rebs racing to an early lead — 17-0 after one, 31-0 at the half — Eason was a sitting duck in the tackle box. He got sacked three times and was hit on nine other occasions. Whether facing four-man pressure or a bevy of blitzers, the five-star phenom was indecisive and held on to the ball too long.

Even if Chubb is unavailable, Eason needs to lean on his ground game. Reserves Sony Michel and Brian Herrien are more than capable.

On paper, everything points to Tennessee taking care of Georgia at Sanford Stadium and announcing itself as the class of the East once and for all. Momentum sides with the Volunteers after laying Florida to rest.

But there’s no guarantee said momentum will make the 235-mile journey from Knoxville to Athens. Not to mention the fact that UT hardly has a stranglehold on the division. A loss would put the Bulldogs atop the race for the conference title game based on tiebreakers — head-to-head, of course, is most important.

The Vols knocked off the Gators last week and partied like it was 2004. They better not be hung over, though. These Dawgs can still bite.