The SEC baseball season is now halfway through, and the attendance numbers for the 14 schools are dramatically different.

As you can see below, LSU, Mississippi State, Arkansas and Ole Miss are blowing other schools out of the water when it comes to per-week attendance:

#SEC baseball attendance through the first half of conference play pic.twitter.com/D14utxSso8 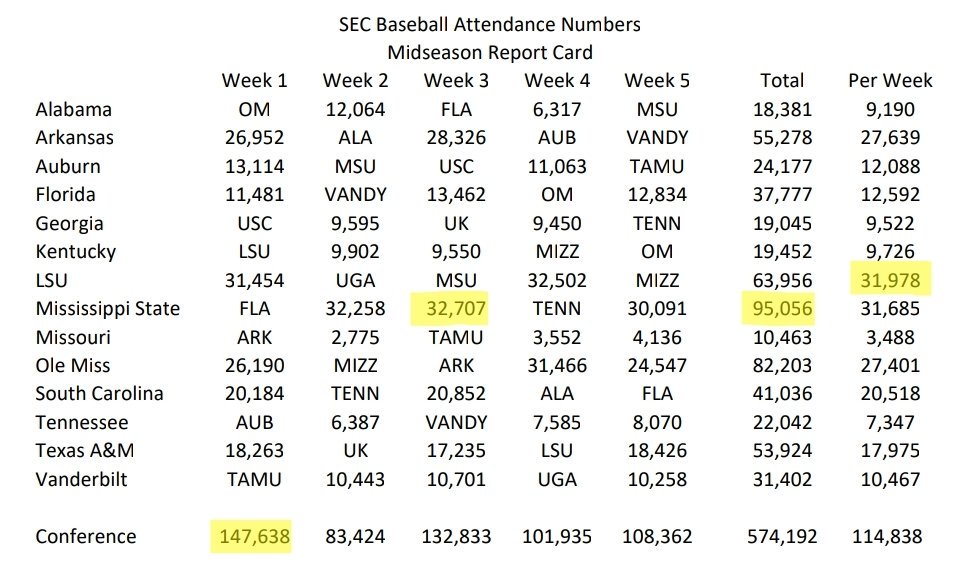 As you can see, Mizzou is lagging significantly behind the rest of the conference, with only 10,463 total fans in three home series. Georgia and Kentucky also have under 20,000 total fans, but they’ve only played two home series each.
There’s still another half of this season to go, but these are some eye-opening numbers for the SEC baseball squads.
TRENDING
257,748 READS
Alabama is no longer ranked No. 1 in ESPN's FPI Rankings
107,336 READS
Florida State runs one of the worst fourth-down trick plays you'll ever see
99,384 READS
Paul Finebaum calls Dabo Swinney a lousy loser: 'They're done for the season'
LATEST NEWS
View All
13 minutes ago
Manny Diaz fires back at Kirk Herbstreit following critical comments about Miami
39 minutes ago
Sam Pittman reveals when he realized Arkansas could have a special season
50 minutes ago
Sam Pittman explains how Barry Odom has built trust with Arkansas players
1 hour ago
Greg McElroy responds to being called out on RedZone over sack record
2 hours ago
Ed Orgeron says LSU needs an improved running game, full Tiger Stadium Saturday night
2 hours ago
Sam Pittman shares comical text message exchange he had with Georgia DC Dan Lanning
VIEW MORE