How Much Are 2020 National Championship Tickets?

With LSU headed to their first national championship since 2011-12, the average price for tickets to the January 13th game at the New Orleans Superdome is $2,239. At that price, it’s the 4th most expensive National Championship game this decade, behind the 2018 UGA-Alabama game, which took place in Atlanta, UGA’s backyard.
At the end of the semi-finals, the cheapest tickets were $1,353 for a pair in the Terrace Level, Section 649. However, since then prices have fallen and now you can get in for just over $1,200.  The most expensive ticket is $8,547 for a ticket on the Plaza Sideline in Section 116. The cheapest Lower Level ticket is $1,829 in Plaza Endzone, Section 132. There are currently just over 4,500 tickets available on secondary market.
On the secondary market TicketIQ will offer fans a Low Price Guarantee on all sold-out College Football National Championship tickets. That means that if you find a secondary market ticket for less on a site like StubHub or Vivid, we’ll give you 200% of the difference in ticket credit. TicketIQ customers save up to 25%.
🎟️ Visits TicketIQ For Sold Out LSU vs Clemson Tickets 🎟️
Use Promo Code SDS10 For 10% Off Any Purchase 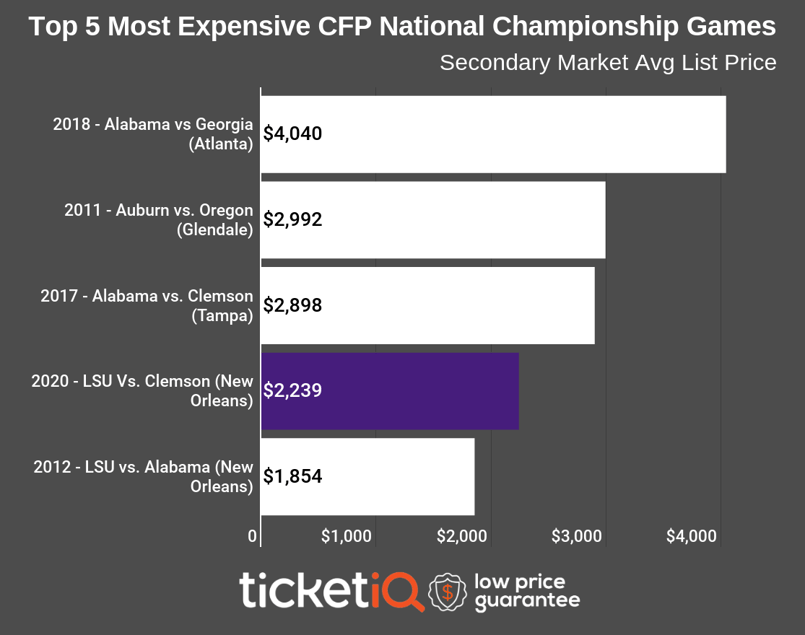 The cheapest prices, also known as the ‘get-in’ had also increased 18% since the start of the Semi-final game, as the below shows. Prices reached their peak between the Peach and Fiesta Bowl and dropped by about 38% when Clemson defeated Ohio State. After falling below $1,000, prices are beginning to tick up again and the get-in price is now $1,207. 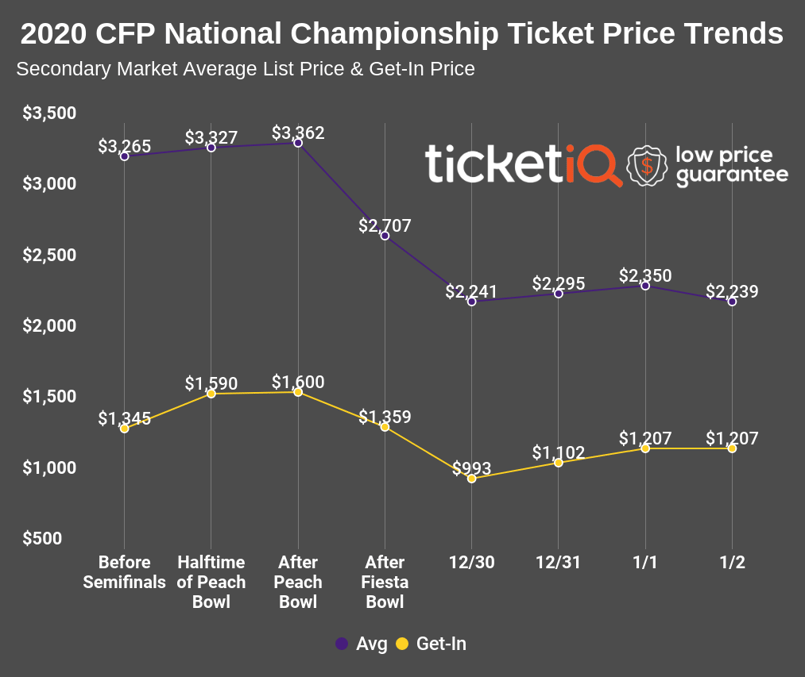 TRENDING
369,168 READS
Report: College football expected to be canceled this week
121,658 READS
Reports: Fall sports could potentially be canceled in all conferences by the end of next week
22,050 READS
Florida RB has heart-breaking tweet amid reports of season canceling
LATEST NEWS
View All
17 minutes ago
During a chaotic day of college football, SEC commissioner Greg Sankey releases a statement
49 minutes ago
Tennessee has officially assigned its first No. 0 jersey following offseason NCAA rule change
1 hour ago
Make CFB great again: President Trump joins the #WeWantToPlay movement
1 hour ago
Kirk Herbstreit expects the SEC to fight for the upcoming fall season: 'They will do everything they can in order to play'
2 hours ago
Report: SEC presidents schedule an impromptu meeting for Monday afternoon
2 hours ago
Georgia lands commitment from nation's No. 3 tight end prospect
VIEW MORE

Jesse Lawrence
Jesse Lawrence is founder and CEO of TicketIQ. He is a Yankee by birth and married into an Alabama football family. He now attends at least two SEC football games every year. Saturday is his favorite day of the week.

RECENT ARTICLES
SEC
During a chaotic day of college football, SEC commissioner Greg Sankey releases a statement
SEC
The Big Ten's handling of this situation has been maddening, and commissioner Kevin Warren owes everybody an explanation
SEC
Make CFB great again: President Trump joins the #WeWantToPlay movement
SEC
Kirk Herbstreit expects the SEC to fight for the upcoming fall season: 'They will do everything they can in order to play'
PRESENTED BY