Notre Dame’s upset of No. 1 Clemson shook up some College Football Playoff projections of ESPN reporters. Clemson is no longer a unanimous pick as the Tigers were a week ago. The Tigers fell off of two ballots out of 14, while Alabama, Notre Dame and Ohio State were unanimous picks this week.

BYU landed in two of the writers’ picks following a 51-17 rout of Boise State, and that brought them into the conversation as a fifth team.

The Fighting Irish winning the top 5 showdown in South Bend caused Notre Dame to be a unanimous pick from the ESPN writers for the first time this season. The win ended Clemson’s 28-game ACC win streak and gave the Fighting Irish their first victory over a No. 1 team at home in 27 years. The teams will likely meet in the ACC championship game in December.

QB Ian Book had 310 passing yards and a touchdown, while Kyren Williams was Notre Dame’s catalyst with 140 yards on the ground and three touchdowns.

The Buckeyes routed Rutgers 49-27 as QB Justin Fields strengthened his case to be a contender for the Heisman Trophy.

Alabama was off this week and returns to action against LSU next week, so the Crimson Tide should keep a firm grip on a top 4 slot. 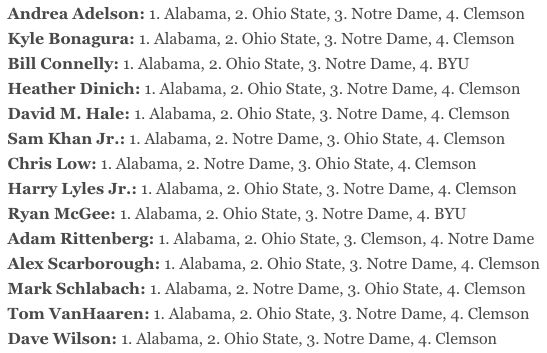