Police are investigating an incident at Saturday’s LSU-Ole Miss game that allegedly left one fan hospitalized with a concussion and multiple fractures.

According to MSnewsnow.com, a man named Chris Barnes is featured in this video posted to Facebook. Shown in what appears to be an animated conversation with two security officers, Barnes eventually takes a hard right hand to the face, causing a stir among the fans seated nearby.

IMG_1308My husband, a two time Veteran of the US Army National Guard, was wrongfully assaulted on campus during the Ole Miss vs LSU game by a POLICE OFFICER. He was hit twice in the face and then arrested. THEY DID NOT GIVE HIM MEDICAL ATTENTION. Four hours later once he posted bail, he asked his friends to take him to the ER. He was diagnosed with a concussion, fractures to his orbital wall and maxillary sinus and contusions to the tissues of his eyes. This all stemmed because the officers thought he did something that someone a few rows up did and blamed him and his friends. I’m disappointed in the University police department and the Oxford police department for letting this happen. YOU ARE NOT ABOVE THE LAW. THIS IS NOT OK. Please help us get justice by calling out this police officer! I want his NAME AND BADGE! Please help me get this to the media by sharing. Thank you. Pictures posted in comments.

According to the news report, the punch left Barnes’ face looking like this: 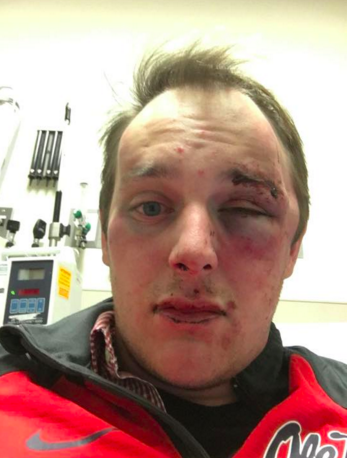 The Ole Miss police have released a statement. It sounds as if the officers involved were not affiliated with the university, but were contracted to help provide security for the game. The Ole Miss Police Department is investigating the incident:

Christopher Smith
An itinerant journalist, Christopher has moved between states 11 times in seven years. Formally an injury-prone Division I 800-meter specialist, he now wanders the Rockies in search of high peaks.