In a previous post, I looked at the next round of college football realignment. It only made sense to write a companion thought experiment, reevaluating the last round of realignment. If we went back to 2010 and every conference got a do-over with perfect foresight, how different would the college football landscape look? Would conference be content with the present alignment?

The last round was almost all about compiling cable network footprint. But, cable is at least on the wane. Doing it over, schools may take more of a look at the quality of the television inventory and the conference brand moving forward, planning for a day when they are in the business of appealing directly to fans. Certain schools, brought in for cable market proximity, may be much less appealing.

Here’s a scenario for how a realignment redo, with perfect knowledge, may play out.

The SEC makes the first move and decapitates the ACC. Florida State and Clemson get the invite over muted grumbles from Florida and South Carolina. The schools accept, after a few minutes of rejoicing.

Texas A&M still joins. That move has worked out well for both conference and program. Though, one could ask whether Texas A&M fans would enjoy winning and competing for the Big 12 and beating Texas more than being middle of the pack in the SEC. The conference needs one more school as a makeweight. Consistent football potential trumps TV market. Welcome, Virginia Tech. 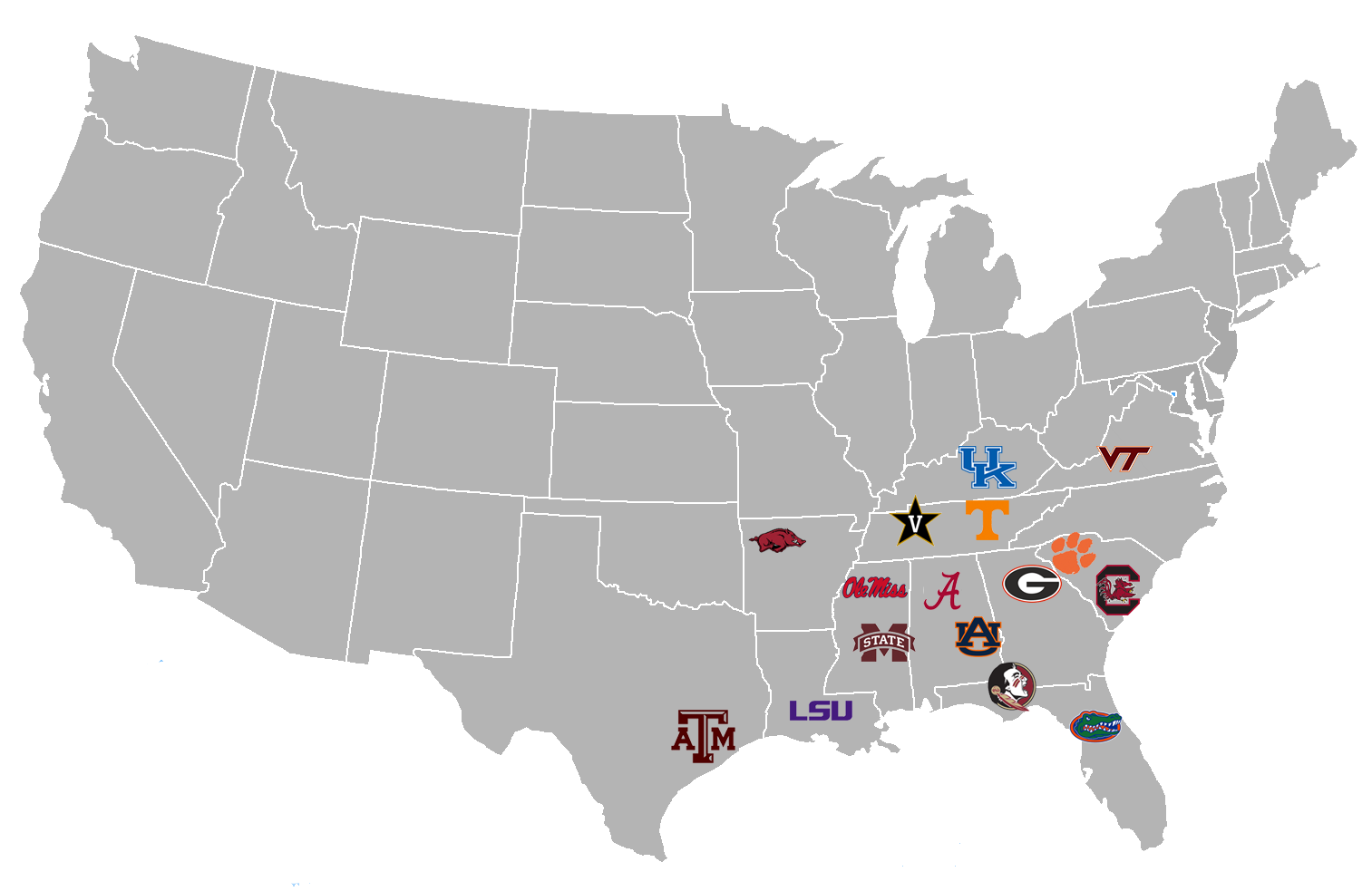 These moves accentuate what the SEC brand is: the preeminent college football competition. The conference has more balanced divisions. The recruiting stranglehold in the South grows even stronger. The best of the best are playing in the SEC. There are top draw games every weekend.

The SEC sticks to modern tradition. Two divisions, East and West, meet in Atlanta to determine the SEC champion.

The Big Ten can’t match the SEC’s excellence. But, college athletics is about branding power. In that respect, no conference can touch the Big Ten. Michigan, Ohio State, and Notre Dame are three of the four biggest brands in college football. North Carolina and Duke are two of the three biggest in basketball. These aren’t broadcasting rights major entities can walk away from.

Where the deal nearly falls apart is organizing divisions. It’s near impossible to get balance. The B1G opts for four team pods. Teams play their three pod rivals every year. They play two teams in each other pod per year, alternating. Every team hits every opposing stadium within a four-year cycle. The pods look like this. 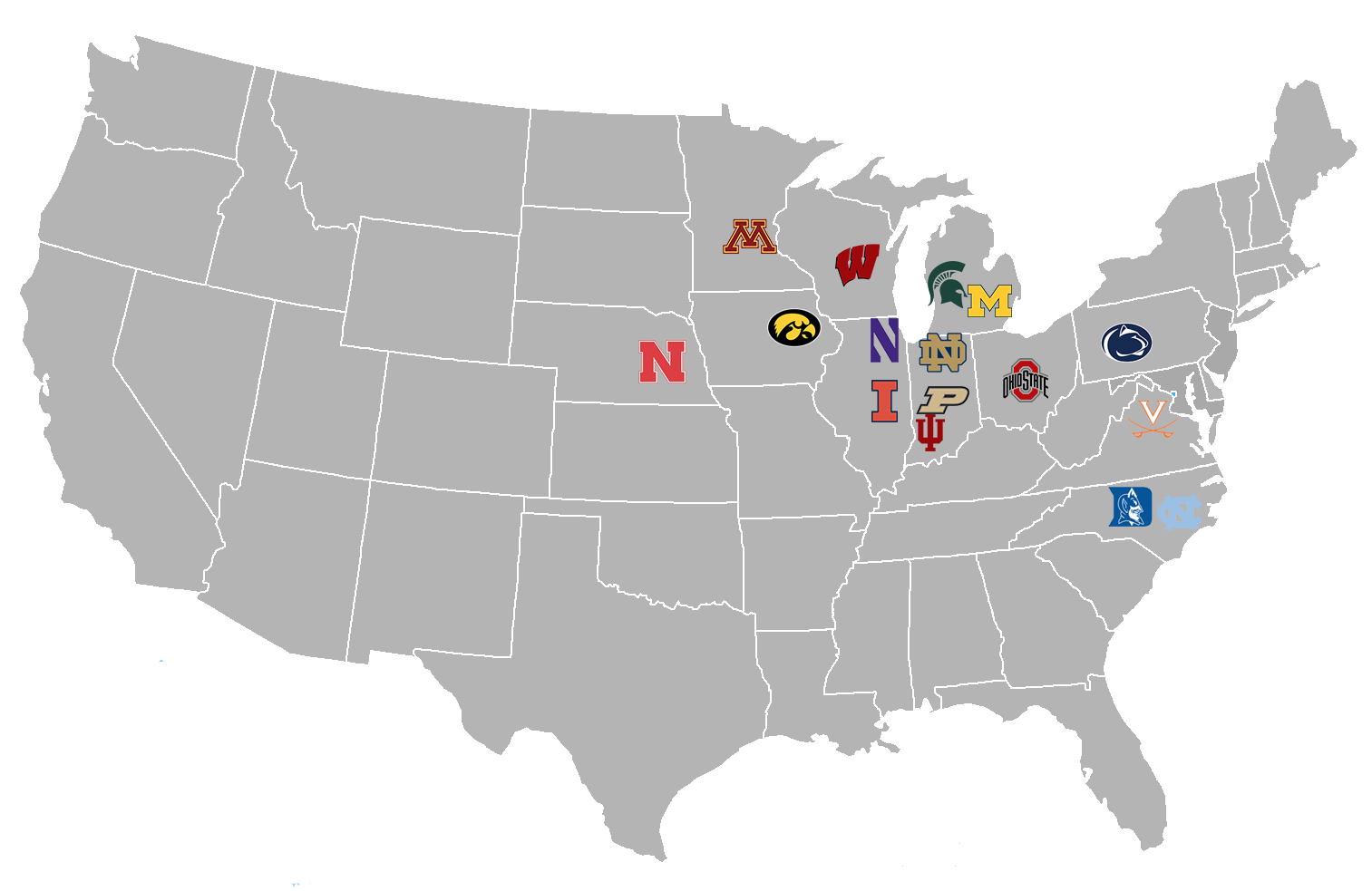 The top two teams play for the title game. However tempting, the B1G can’t get away with a four-team playoff among the pod winners.

The reaction everywhere else is panic. The Big 12 is unstable. The ACC is in its death throes. The Pac 12 offers a safe harbor for schools that make geographic sense. Texas and Oklahoma jump. Texas Tech and Oklahoma State come with them as makeweights to smooth over those deals politically. Colorado and Utah still join to make the geography more coherent.

The conference is wonky. It’s a clash of cultures. The play isn’t up to SEC level. Beyond Texas and maybe USC/Oklahoma, it can’t match the Big Ten for branding. But, it has solid foundations. It controls two major recruiting grounds in California and Texas. People get used to it. It becomes a viable third super conference. Meetings are held at Pebble Beach, obviously.

Like the Big 12, two eight-team divisions don’t quite line up right. The Pac 16 also adopts the newfangled pod alignment. Texas and USC playing more than a couple times per decade would be optimal. 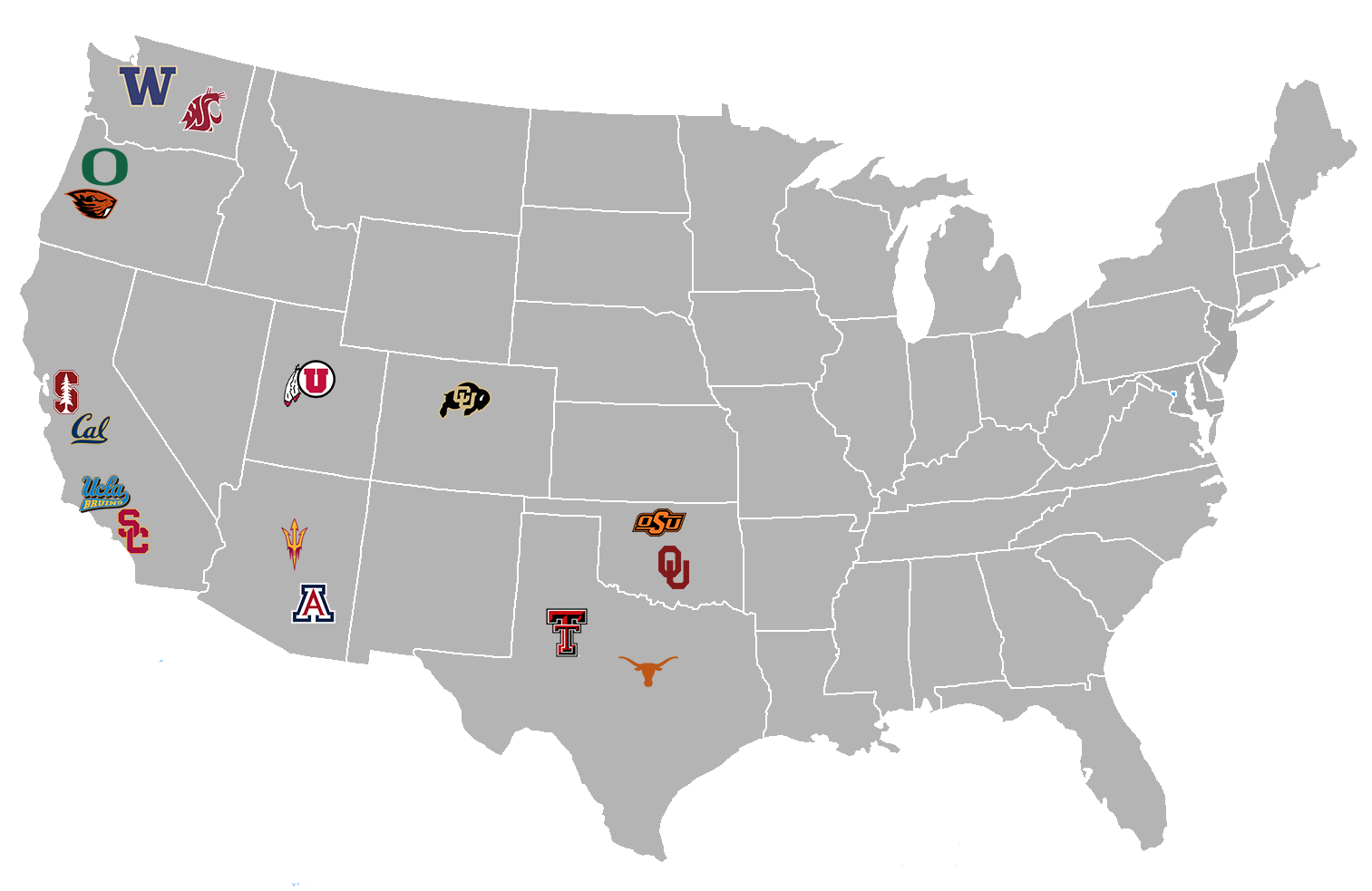 The “Power 3” Leaves The Rest Behind

We’d hope under this scenario media members could come up with something better than “Power X conferences.” No such luck. Two new conferences form in the East and West. Both contain teams that were in a power conferences. But, even combining the two won’t get to a viable or “Super 16.”

A 12-team “ACC” is organized as follows. It plays a five-game division slate and a four-game cross-division slate. Not a bad basketball conference.

Would Miami be a leftover? Small alumni base. Poor facilities. They’ve finished ranked in the Top 25 twice in the past 11 seasons, never higher than 19th. The Hurricanes have not reached a conference title game since joining the ACC. We’re nearly to the point present recruits can’t remember Miami being good.

There is also a 10-team American conference that emerges from the Big 12 remnants.

Some schools that hit the lottery during the last realignment round – Maryland, Rutgers, Missouri – are among those left without a seat when the music stops. The two conference winners play in a non-title game event. It’s still not enough to realistically get that winner into a four-team playoff.