Good morning and happy Friday! We’re heading down the stretch run of the 2020 season, and many teams are gearing up for their annual rivalry games. This weekend, we have three matchups of ranked teams and some other important action around the country.

In today’s newsletter, we’ll discuss Georgia making a switch to JT Daniels at quarterback. Then, we’ll dive into James Franklin’s hot seat at Penn State. Finally, we’ll put a few top-25 teams on upset alert. Let’s get started, shall we?

Georgia is reportedly making a QB change this week. Can JT Daniels spark the Bulldogs’ offense? 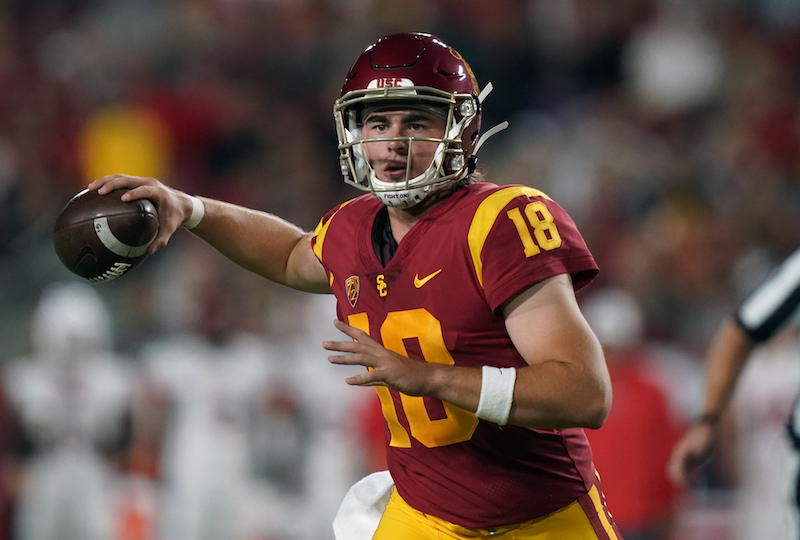 The Georgia Bulldogs were last seen on the field on Nov. 7, losing 44-28 to SEC East rival Florida. That loss likely cost the Dawgs a chance to go to Atlanta for the SEC Championship Game. Then, last weekend, a game against Mizzou was postponed.

Now, as the Bulldogs prepare for a game against a struggling Mississippi State squad, they’re making a change to try to jumpstart their offense. Per a report, JT Daniels — the former 5-star recruit who transferred from USC — is getting the start on Saturday. So, what should we look for? Here’s what’s being said about Daniels:

Bennett and Mathis have struggled mightily in recent weeks, so it makes sense to see what Daniels can do. Mississippi State’s defense is decent, so it won’t be a cakewalk for the former USC standout. Will he lock down the job for the rest of the year? We’ll find out on Saturday night!

As things stand on Thursday evening, a total of 15 FBS games have been either postponed or canceled for this weekend. That’s a lot of games, obviously, but there are still some interesting matchups remaining on the schedule, including three matchups of ranked teams.

So, who is favored to win these big-time games? Will we see any major upsets during this weekend’s action? Here’s a look at some of the key lines for this weekend’s games:

Can Liberty beat yet another ACC team on the road as an underdog? Will the top teams continue to win in blowout fashion? We’ll find out as this weekend’s games get underway!

Penn State’s 0-4 start has been a major disappointment. Will James Franklin still be the coach in 2021? 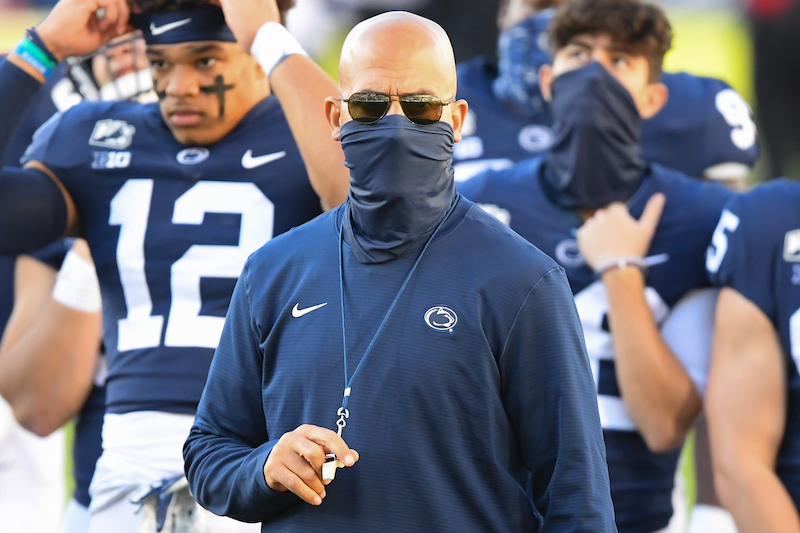 As the Nittany Lions prepare for a game against Iowa this weekend, looking to avoid an 0-5 start to the season, coach James Franklin’s name has been in plenty of headlines. Will he still be at Penn State in 2021? Let’s take a look at some of the stories surrounding the Penn State coach:

After this weekend, Penn State’s schedule gets easier. The final three games are at Michigan, at Rutgers and vs. Michigan State. Still, a loss this weekend to Iowa would ensure a losing regular-season record. If that happens, the heat around Franklin’s job will only continue to rise. We’ll see what happens this weekend!

Now that most conferences have a few games under their belts, let’s dive into the offensive explosion across the FBS. As things stand entering this weekend, nine FBS schools are currently averaging at least 45 points per game. For today’s quiz, can you name those nine schools? Bonus points if you can name the two programs averaging more than 50 points per game.

Several games have been canceled this weekend, but good matchups remain. Who is on upset alert? 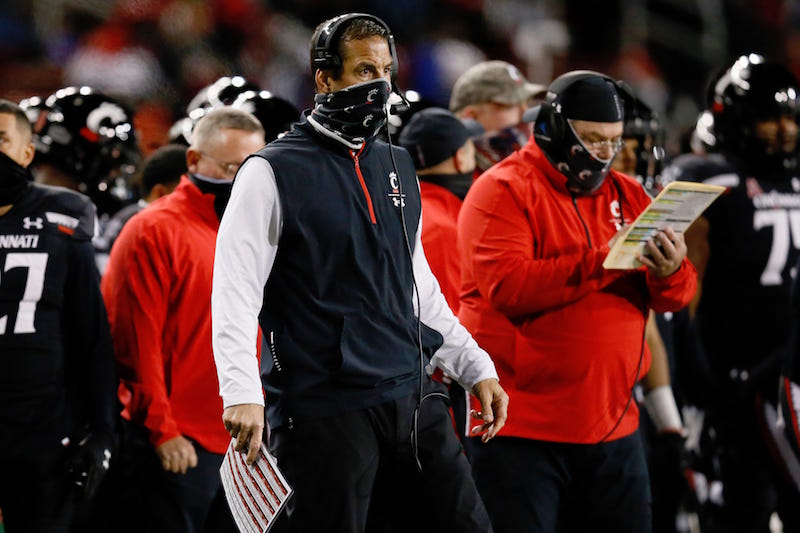 As we write this on Thursday night, there have been 15 FBS games postponed or canceled due to the COVID-19 pandemic. However, there are still some exciting matchups, including three games between ranked squads. That means at least three ranked teams will lose this week.

Will any other ranked squads lose in upset fashion over the next couple of days? Let’s take a look at four teams that need to play their best to avoid losing:

We’ve seen crazy results this year. With rosters constantly in flux due to COVID-19 and contact tracing, teams have had to adjust on the fly on a weekly basis. Will we see more major upsets this weekend? It seems likely, but we’ll see on Saturday!

The nine FBS schools averaging at least 45 points per game this season are:

“Well, Cardinal Mooney High School in Youngstown was part of my recruiting area for a long time and you know all the Stoops brothers came through there. That’s where they went to school when their dad was a defensive coordinator there. Even though they all ended up at Iowa, we still tried to recruit them at Michigan State when I was at Michigan State, and Don Bucci was the coach (at Cardinal Mooney). Ron was a defensive coordinator, which was their dad, who I had a really good relationship with. You know I’m gonna admit and I wasn’t a very good recruiter back in those days.”

– As Alabama prepares to play Kentucky this weekend, Nick Saban relived the time when he tried to recruit Mark Stoops to Michigan State. 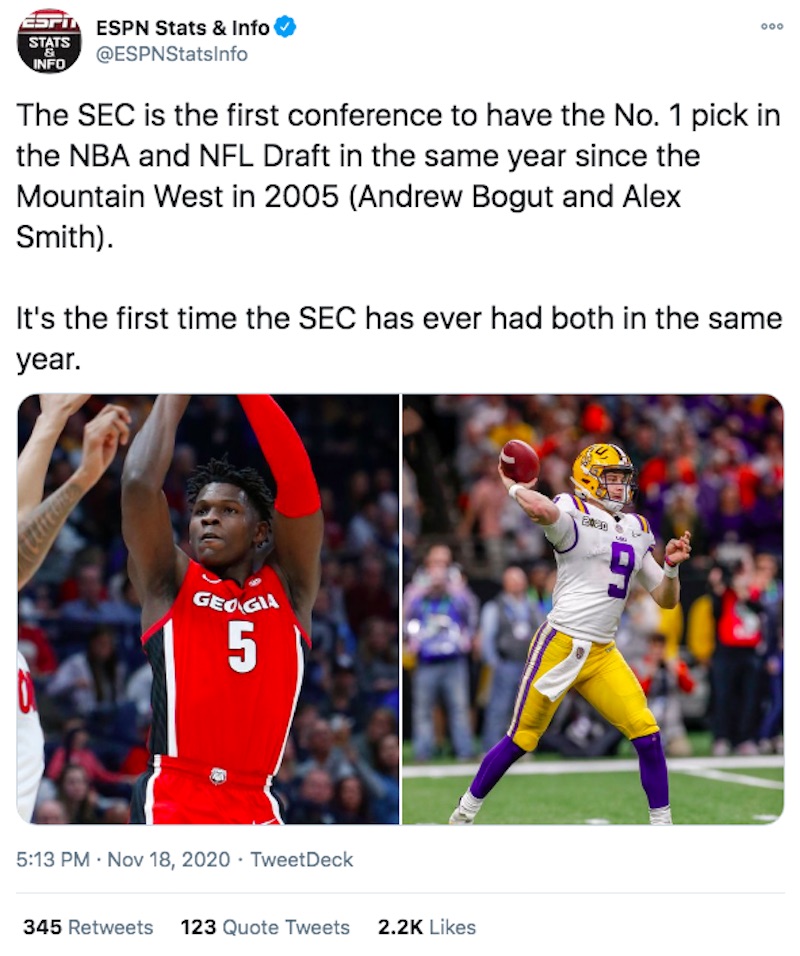 The SEC had the No. 1 overall picks in the NBA and NFL Drafts for the first time ever this year, thanks to LSU QB Joe Burrow and Georgia G Anthony Edwards. It was the first time since 2005 players from the same conference went No. 1 overall in both drafts. That’s when Utah had both No. 1 picks.

This edition of the Saturday Football newsletter was written by Adam Spencer.