Good morning and happy Wednesday! We’ve made it to December, so many teams are wrapping up their regular-season schedules. Others are scrambling to make up games postponed by the COVID-19 pandemic. Either way, there are only a couple of weeks left before the conference championship games are played!

In today’s newsletter, we’ll discuss the Urban Meyer rumors taking place at Texas. Then, we’ll dive into some of the hottest coaching seats in the Big Ten. Finally, we’ll get into the incredible season Alabama WR DeVonta Smith is having and whether he can work his way into the Heisman conversation or not. Let’s get started!

Tom Herman is on the hot seat at Texas. Should the Longhorns keep him or pursue Urban Meyer? 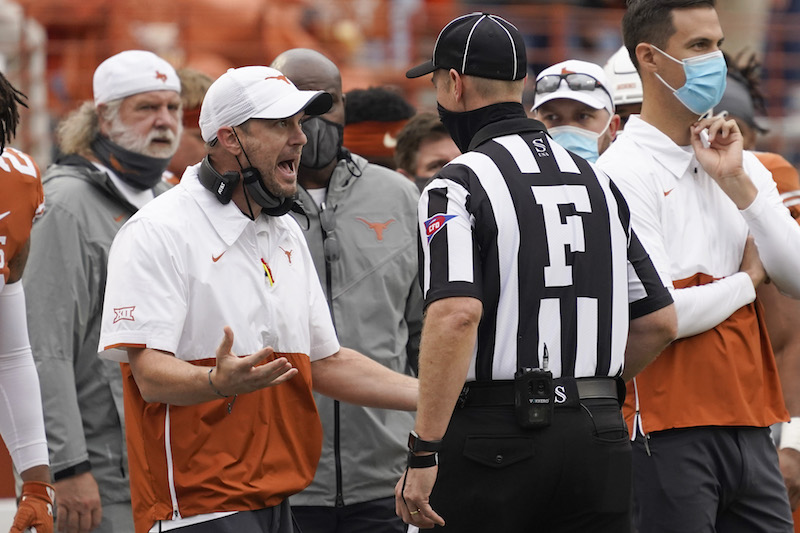 Whenever a coach at a big-time program is on the hot seat, it seems former Ohio State and Florida coach Urban Meyer’s name is immediately put atop the list of candidates fans want. That makes sense, as Meyer won two titles with the Gators and one with the Buckeyes. In previous years, we’ve heard Meyer’s name most realistically connected to USC, Notre Dame and, now, Texas.

So, are the Longhorns ready to move on from Tom Herman after Friday’s loss to Iowa State eliminated Texas from the Big 12 title picture? Rumors (rumeyers?) are swirling in Austin. Let’s take a look at Herman’s hot seat as we enter December:

The Longhorns will be in a tricky situation this offseason. Many boosters and fans are done with the Tom Herman era. But, will the program be in a better spot with anyone other than Meyer stepping in? That’s a question AD Chris Del Conte is going to have to seriously weigh before he makes a final decision over the next couple of weeks.

The Early Signing Period is still set to take place from Dec. 16-18, even though 2021 recruits haven’t been able to take official visits to schools since the COVID-19 pandemic began. However, since official visits won’t be back on the table until April at the earliest, National Signing Day in February won’t offer much more opportunity for top players to explore different schools.

Thus, we’ve seen many of the nation’s top recruits announce their commitments. Which schools are putting together the best classes? Here are the top 10 recruiting classes as of Tuesday night (via the 247Sports composite rankings):

Will those rankings hold through the end of the Early Signing Period? We’ll find out as other top recruits announce their commitments over the next couple of weeks.

A handful of B1G head coaches have earned a spot on the hot seat. Will any changes be made at the end of the year? 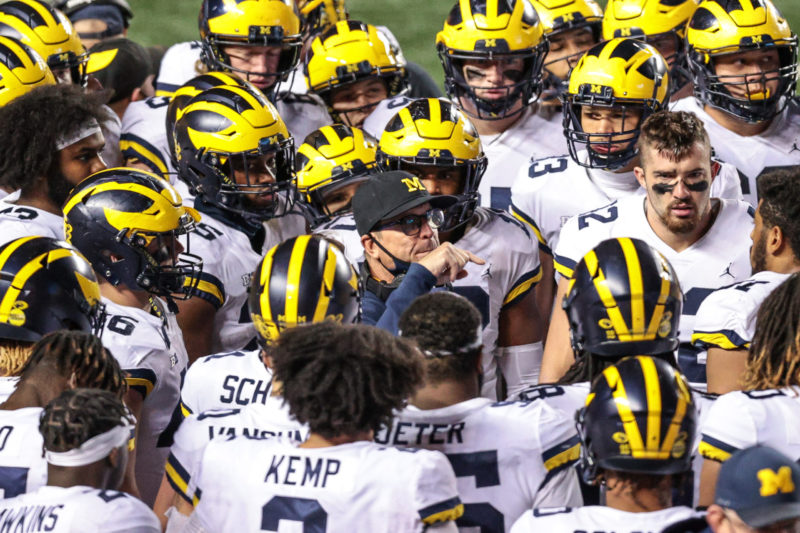 Blueblood programs and high expectations. Regardless of circumstances, that’s always going to be an unrivaled combination in college football, and it’s a big reason why a handful of Big Ten coaches are feeling more pressure than ever to deliver results.

Scott Frost (Nebraska), Jim Harbaugh (Michigan) and James Franklin (Penn State) have all had underwhelming years in 2020. Those three “traditional” blueblood programs have a combined 5-12 record with three weeks left in the season. To say the fan bases of those respected teams are disgruntled would be a major understatement. Though Illinois isn’t a traditional B1G program, there’s also some frustration with Lovie Smith, whose Fighting Illini team is just 2-3, despite having the most talented team in his tenure in Champaign.

But will any changes be made at the end of the season? There are varying levels of concern for each head coach:

Interested in hot seat rankings? CoachesHotSeat.com suggests that Harbaugh is on the hottest seat in college football right now, while Frost is just a few spots back at No. 4. Franklin and Smith didn’t make the list, but Purdue’s Jeff Brohm surprisingly came in at No. 10. We’ll see over the next couple of weeks if any big changes are made.

Since the Early Signing Period starts later this month, let’s focus on recruits for today’s quiz. Specifically, let’s focus on the top-rated recruits from each class since 2010. Can you name the No. 1 player in each of the past 10 classes (2012-2021)? Bonus points if you can name which schools they ended up signing with. (Note: We use the 247Sports composite rankings.)

DeVonta Smith is the SEC’s all-time leader in touchdown catches. Can he sneak into the Heisman race? 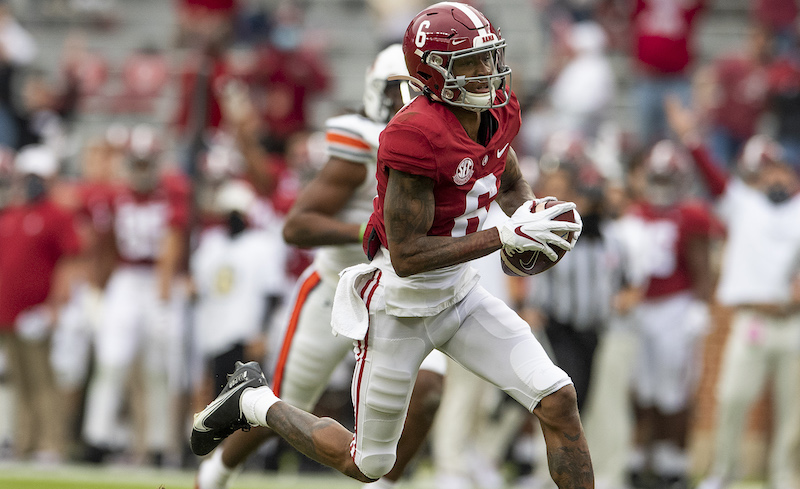 Alabama has a pair of top Heisman Trophy candidates in QB Mac Jones and RB Najee Harris. However, they might not even be the best players on the Crimson Tide’s dynamic offense. That’s because WR DeVonta Smith — the guy who caught the famous 2nd-and-26 pass from Tua Tagovailoa to beat Georgia in the national title game following the 2017 season — is putting up unbelievable numbers. So far, he has caught 72 passes for 1,074 yards and 12 touchdowns. Oh, and he also ran for a touchdown.

Is Smith getting the respect and attention he deserves? Let’s dive into the incredible season he’s having and appreciate the hard-working Alabama receiver:

At the absolute most, Smith has four or five games left in an Alabama uniform. He flew under the radar for his first couple of years in Tuscaloosa, but now is his time to leave a lasting legacy. He’s sure to continue to put up big numbers in the coming weeks, so appreciate the incredible talent he has before he’s playing on Sundays!

Here are the answers to today’s recruiting quiz. The top players in each of the last 10 classes (according to the 247Sports composite rankings) were:

As you can see, there are plenty of stars in that group and some guys who didn’t quite pan out. What side will Foreman fall on? We’ll see starting next season!

“I don’t know how long Nick Saban is gonna keep coaching, but I’d wager it’s closer to 8 or 9 years than it is to 1 or 2. … Having a taste of that, and not being a part of (the game against Auburn due to a positive COVID-19 test), he doesn’t want that to happen again. He’s probably going to coach a lot longer than people think he will.”

– ESPN’s Chris Low is a reporter who speaks with Alabama coach Nick Saban more than most in the media business. During an episode of “The Paul Finebaum Show” this week, Low raised eyebrows across the country by predicting that Saban, who just turned 69 on Halloween, may have another decade of coaching left in him. 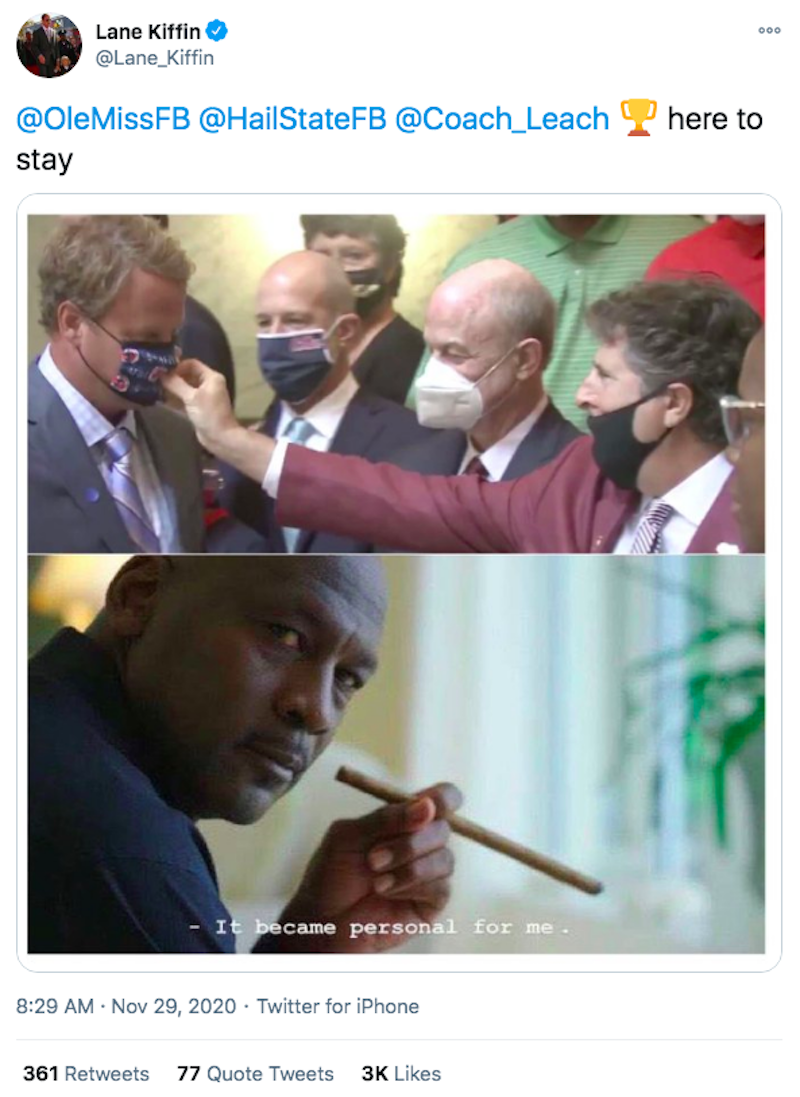 Ole Miss coach Lane Kiffin led his team to a win in his first Egg Bowl at the helm of the Rebels’ program, beating Mike Leach’s Mississippi State squad 31-24. After the game, Kiffin took to Twitter to share the hilarious Michael Jordan meme above, recalling a moment before this season when Leach snapped his mask during a meeting with Mississippi officials.