We’re back with another round of predictions in anticipation of Week 4 of the SEC season.

If you missed the news, the Vanderbilt at Missouri and LSU at Florida games have both been postponed. These games are each tentatively scheduled to be played on Saturday, Dec. 12.

Here is how the guys predict the Week 4 action to play out:

Michael: Auburn is two officiating mistakes away from being 0-3 on the season. The Chad Morris offense on The Plains is about as effective as I imagined it would be — it’s horrible. Bo Nix had flashes against Kentucky but that probably had more to do with the Wildcats than anything else. Even Kevin Steele’s defense has had its issues this season. How is Auburn favored in this matchup? Mike Bobo has his unit playing some good football and now with Kevin Harris heating up, that takes pressure off a passing attack lacking many explosive playmakers. Auburn is struggling to find five offensive linemen that can work together on the field at the same time. Meanwhile, South Carolina’s defensive line, arguably the strength of the defense, continues to play better each week. That’s a matchup that heavily favors the Gamecocks on Saturday.

Chris: South Carolina hasn’t beaten Auburn since 1933. Auburn comes into this game whistling through the graveyard once again after a gift of a victory from SEC refs last week. The offense has looked average at best under new OC Chad Morris, but there were some positives last week with Tank Bigsby and the run game churning out 200+ yards.

South Carolina is just a roller coaster of emotion for their fans and anyone who watches them. They beat Vandy last week but it was very close the entire first half and the Dores were missing roughly 9308338907 players. USC has the 4th best rushing defense in the SEC, and Auburn is 2-5 in their last 7 road games. Muschamp is due for some stupid win that will inevitably save his job for another few weeks or maybe even the season, and I think that comes this weekend in Williams-Brice. And, to be honest I think they might actually be the better team with all of Auburn’s injuries.

Michael: I’ve been surprised by how many people consider this matchup a toss-up. Kentucky has been very disappointing this season and while winning their first game of the season against Mississippi State last week may provide some momentum for the Wildcats, they could not be facing a more difficult transition preparing for the Air Raid last week to facing Tennessee’s ground and pound offense the next weekend. Make no mistake, Tennessee was humbled last week by Georgia but the Bulldogs are likely going to do that to many teams this season. Kentucky may only have two matchup advantages in this game, UK’s offensive line against Tennessee’s defensive front, and at the punter position. That’s it. That won’t be enough to get the cover in Neyland Stadium. Plus, Jarrett Guarantano has had a ton of success against Mark Stoops’ program over the years, and I like that to continue this week, with the senior having a nice bounce-back performance.

Chris: On a scale of “my fiance saying she’s ‘fine” to “Ikea instructions in German” how confusing has Kentucky been so far this season? The Cats had 157 total yards of offense last week with 51 of that coming on 1 play, and still somehow won by 3 scores. This is a huge game for Kentucky who has been on the wrong side of multiple close losses this season, and has played the littlest of little brothers to Tennessee their entire program history.

Tennessee looked awesome in the first half last week against UGA. I couldn’t have been any more wrong about my prediction, and I loved every minute of it. They’re obviously still not “there” yet, but they are closer and closer. This game feels like the typical feel good Kentucky underdog story, as it always does against Tennessee. And, I’ve heard all week about the history of the series being dominated by the Vols as well as Pruitt’s record vs. Stoops. But, I’m done believing in what Kentucky “might” be, and am convinced that Tennessee has turned the corner enough as a program where they bounce back after losses, and win the games they’re supposed to win.

Michael: All of a sudden, after exposing Alabama’s defense last weekend in Oxford, Ole Miss is the darling of the SEC. The Rebel offense has been outstanding all season, but guess who practices against a very similar scheme each week in practice? Barry Odom’s Arkansas defense. Now, that doesn’t mean the Razorbacks are going to completely shut down Matt Corral and company but I bet they perform better than expected in this matchup. Feleipe Franks is playing some of the best football of his career right now for Kendal Briles and players like Trelon Smith and De’Vion Warren have emerged in the offense. Don’t be stunned if the better offense in this game comes from the home sideline. After Ole Miss had the game of its life on offense last weekend, I anticipate a bit of a let down in this one.

Kiffin has been really good against the spread covering in 12 of his last 17 as a head coach, and Sam Pittman’s squad is 3-0 ATS this season as well. Arkansas has covered in 6 of the last 7 between these schools, and I am very worried about their 11th ranked rush defense in the conference against this Ole Miss attack. I’m also worried about how much the Hogs can score to keep pace with Matt Corral and Lane Kiffin’s offense. But, not as much as I’m worried about who from Ole Miss is even making the trip due to the recent COVID issues they’ve had in Oxford. Feleipe Franks has completed 72% of his passes with 6 TDs and 0 INTs the last 2 games. I’m taking the Hogs at home and couldn’t be less confident.

Michael: How quickly the narrative can change in the SEC. Just a few weeks ago, Mike Leach was the toast of the SEC and Mississippi State was producing “hop on the bandwagon” hype videos while Jimbo Fisher’s program looked to be trending in the wrong direction and everyone was questioning why Texas A&M paid so much to lure the coach from FSU. Now, the Aggies are nearly a touchdown favorite to brave the cowbells of Starkville and return home with a 4-1 record. The offense is so bad at Mississippi State, Mike Leach won’t even commit to a quarterback at the moment. Until the unit proves it can handle drop 8 zone defense, they are just going to see more and more of it in the SEC. The underrated storyline for the Bulldogs is Zach Arnett’s defense. The Bulldogs are playing outstanding football right now and they’ll keep the team in this one until the end. I think Texas A&M has a slight letdown this week but holds on to win in a close one.

Chris: One team coming off a program defining win, and the other coming off the first offensive shutout in their head coach’s entire 19 year career. I feel like recency bias played a large part in this line being where it’s at. Mississippi State has been bad the last 2 games offensively, but defensively they’ve been good. And, despite a 24-2 loss, they did limit Kentucky to only 157 yards of total offense, and they have one of the best rush defenses in the SEC. Their biggest problem has been turnovers, as the Bulldogs have had at least 4 turnovers in every game this year including 6 last week.

My biggest question for this game is what trend changes? Will Mississippi State be able to return to Week 1 form? And/or will A&M be able to get a win on the road. The Aggies are just 2-7 on the road under Jimbo, and Kellen Mond’s numbers are drastically worse away from home. The Aggies win, but Mike Leach and the Bulldogs cover.

Michael: Even before Nick Saban tested positive, I was feeling negative about Alabama’s chances in this one. Alabama fans have been busy pointing the finger at Pete Golding for the team’s defensive issues, but at this point, these corrections are on Saban. When matched up against teams with equal talent in recent seasons, the cracks in Alabama’s foundation have a way of showing and the Bulldogs have the players to do much the same this week. The biggest looming question in this game is how Saban’s departure will affect the team. Will they lose focus or will they be galvanized? It could go either way, but regardless of the level of focus on Alabama’s sideline, Kirby Smart will have his team ready to play on Saturday. This is the game Georgia has been waiting for all year and they won’t let this one slip through their fingers. Alabama’s defensive issues catch up to them again. I’ve been calling for Georgia to win in Tuscaloosa all offseason long, so I’d feel like a loser if I backed off that prediction now.

Chris: This game has certainly lost its luster after the news of Nick Saban testing positive for COVID, but that shouldn’t take away from the incredible matchup we’re about to watch this Saturday in Tuscaloosa – Bama’s offense vs Georgia’s defense. This is only the 4th time in modern history that #1 team ranked in offensive efficiency will play the #1 ranked team in defensive efficiency, and the other 3 were all national title games (2005, 2016, and 2019).

Earlier this week we did a deep dive into the stats for both sides looking at 15 major statistical categories. Here’s a look at just how dominant each unit is. I was honestly blown away by Georgia’s numbers. I’ve said all offseason and this year that they have the best defense in college football since 2011 Bama which is statistically the greatest defense of all-time. But, this Georgia D is deeper and more talented overall.

I’ve also said all year that Georgia will play for a national championship THIS season after beating Bama. But, I don’t think that comes until December. Everyone is going to pick UGA with the recent Saban news, and they probably should. I want to as well, but that’s boring. Also, I keep going back to one reason why I still think the Tide can roll this weekend, and that’s Steve Sarkisian’s offense. Over the past 2 seasons, UGA has faced only one team with that much firepower – LSU. LSU beat the Dawgs 37-10 last year with a great offense and an average defense. I’ll take Bama in the first of at least two games these two teams will play this year. 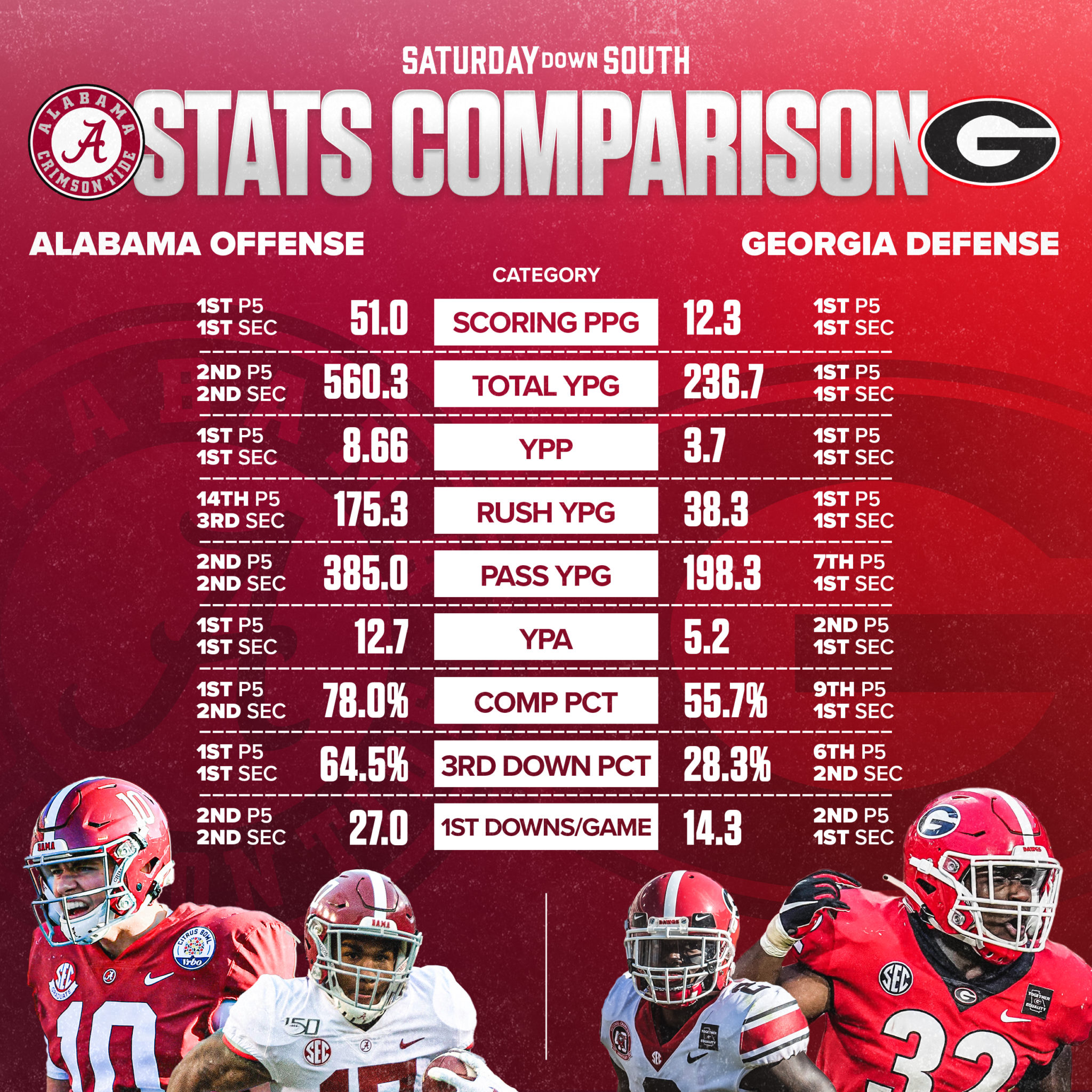