The butt of most football-related jokes in the Lone Star State, Texas coach Charlie Strong will be happy to know the latest person to bash his regime at Texas has been fired.

A social media assistant with the Texas Rangers tweeted ‘Fire Charlie #bye’ soon after the Longhorns’ 50-7 loss to TCU. Here’s a screenshot of the deleted tweet from the MLB franchise’s official account: 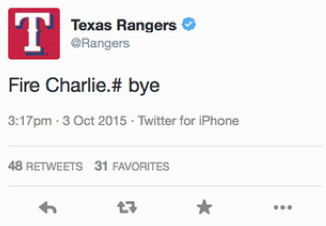 The Texas Rangers released the following statement after the situation was resolved by the employee’s dismissal: