What I want to see from Dawgs, Tide, Vols, Tigers on spring game Saturday

It’s another Saturday full of spring games in the SEC, as Georgia, Alabama, Tennessee and LSU will all be on display.

Needless to say, the rest of the conference is looking up at the Crimson Tide. Even after losing the Outland Trophy winner on offense and a slew of difference makers on defense, no team reloads annually like ‘Bama.

As for the Bulldogs, Volunteers and Tigers, to some degree there is intrigue at quarterback. In Athens, Jacob Eason is supposedly being challenged by Jake Fromm. In Knoxville, the competition is wide open between Quinten Dormady and Jarrett Guarantano. In Baton Rouge, Danny Etling simply needs to do more as the scheme evolves.

To this point, spring games have been a bit of a disappointment across the league. Head coaches are too concerned about injuries — not to mention putting too much on tape for opponents to break down — to truly let it fly.

Nevertheless, here’s what I’ll be looking for watching the Dawgs, Tide, Vols and Bayou Bengals put a lid on spring practice.

Even with coach Kirby Smart drumming up the duel between Eason and Fromm, most of it is for show. I believe it’s Eason’s job.

That being said, the former 5-star recruit is only going to be all he can be if he gets more help around him in 2017. As a true freshman last season, he didn’t get enough support from his backs, receivers or offensive line.

The receiving corps in particular is what would concern me if I were a Bulldogs fan. Two years ago, Malcolm Mitchell was the lone reliable wideout on the roster. This past season, Eason could only count on Isaiah McKenzie. Both are now gone, with Mitchell having exhausted his eligibility and McKenzie leaving early for the NFL Draft.

Reggie Davis is also history, although that may not be a bad thing with his slippery fingers. Terry Godwin disappointed as a sophomore after a strong freshman campaign. We need to see more from Riley Ridley, Michael Chigbu and Javon Wims, too.

Smart added a trio of 4-star receivers on National Signing Day. One of them, Jeremiah Holloman, is an early enrollee and will play Saturday.

For a good portion of last season, prior to Eddie Jackson’s injury, the Crimson Tide had arguably the premier secondary in the country.

But when Jackson was lost at safety, the fabulous Minkah Fitzpatrick was forced to switch from cornerback. With Jackson no longer available and Fitzpatrick not at his natural position, ‘Bama wasn’t quite the same defending the pass.

Not only is Jackson off the pros, but so is corner Marlon Humphrey despite two years of eligibility remaining. Fitzpatrick has returned to corner this spring, which of course is a positive, plus safety is now led by one of the SEC’s more underrated players, Ronnie Harrison. Both Fitzpatrick and Harrison look like future first-round picks. 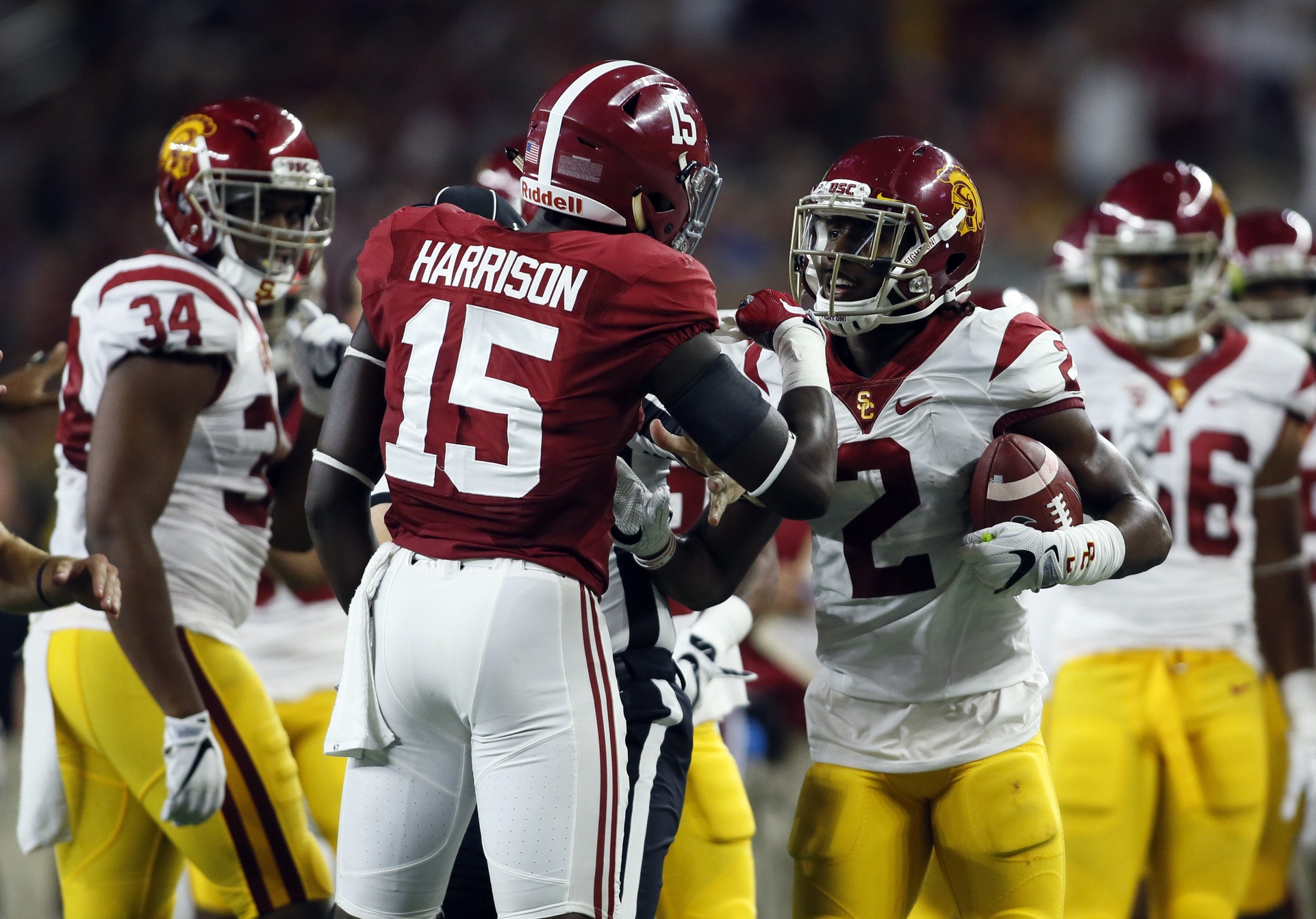 It’s not just about corners and safeties for the Tide, either. The “star” and “money” positions — nicknames for the nickel and dime defenders, respectively — are also crucial and on the field a lot thanks to all those third-and-longs.

There is plenty of experience returning, including Anthony Averett, Tony Brown and Hootie Jones, in addition to some talented youngsters.

One of the more interesting quarterback competitions in the conference, replacing Joshua Dobbs may prove to be an impossible task.

Not only was Dobbs the dictionary definition of a student-athlete — majoring in aerospace engineering is no small feat — but he was also a tremendous football player and single-handedly carried the program on his back here and there.

It’s time to move on, though. Both Dormady and Guarantano were 4-star signees, Dormady for the class of 2015 and Guarantano a year later, but the word on Rocky Top is that their style of play is relatively different. While Dormady is more of a pocket passer, Guarantano is Dobbs-like in his ability to use his legs.

With another year in the system under his belt, Dormady should have a better grasp of the offense at this point. It’s possible that he would be the safer choice for coach Butch Jones. However, Guarantano seems like the high-upside option.

I want to see just how different the scheme looks as they take turns. One way or another, expect this battle to continue during fall camp.

Dave Aranda arrived from Wisconsin last year as the new defensive coordinator and instantly turned around a unit that had been underperforming.

Matt Canada arrives from Pittsburgh with the same expectations on offense. The Tigers haven’t been able to throw the ball consistently for too long. Les Miles and Cam Cameron are now gone, so that excuse can’t be used anymore.

As you’ve no doubt read repeatedly already, Canada did very well with ex-Florida QB Jacoby Brissett at N.C. State and ex-Tennessee signal caller Nathan Peterman at Pitt. Brissett is currently on the roster for the New England Patriots, while Peterman will hear his name called in the middle of the draft later this month.

Can Etling be a top-shelf passer in this league, or will he always be a transfer from lowly Purdue? Even if he proved to be a better fit than the departed Brandon Harris, that wasn’t the highest hurdle to jump.

Canada turned Brissett’s career around, and then he did the same for Peterman. If he can do so for Etling, watch out for the Bayou Bengals.