While this season has gone from bad to worse in the SEC at the game’s most important position, the future appears to be bright.

Four true freshmen started at quarterback this past Saturday, combining for a record of 3-1 and a touchdown-to-interception ratio of 6-to-3. That’s not too shabby considering how they tend to play defense in this conference.

Making the biggest impression was Shea Patterson of Ole Miss. The plan all along was for the five-star phenom to redshirt this year, but once Chad Kelly was lost for the remainder of the schedule due to injury, coach Hugh Freeze rolled the dice. The Rebels were rewarded, as Patterson beat Texas A&M with some fourth-quarter magic.

Of the 14 QBs scheduled to start Saturday, it seems like half of them are interchangeable at this point — and that’s not a good thing. When flagship programs like Florida and LSU are excited about Purdue transfers … well, you know.

Here are my quarterback rankings entering Week 12. The leader is so far out in front that everyone else is playing for second.

After finally getting out of the cellar a week ago, Shurmur again falls to the bottom of the rankings following a 26-17 loss at Missouri.

The lowest-rated quarterback in the SEC of the 12 that qualify, Shurmur was 17-of-29 for 252 yards. He didn’t throw a touchdown for Vanderbilt and was intercepted twice. His TD-to-INT ratio is now negative for the season at 5-to-6.

Shurmur is also dead last this year with an average of 5.9 yards per attempt, which is reflective of poor accuracy and no downfield threats.

Despite putting a lot of points on the board in a 49-36 loss at Tennessee, Johnson had very little to do with it himself. 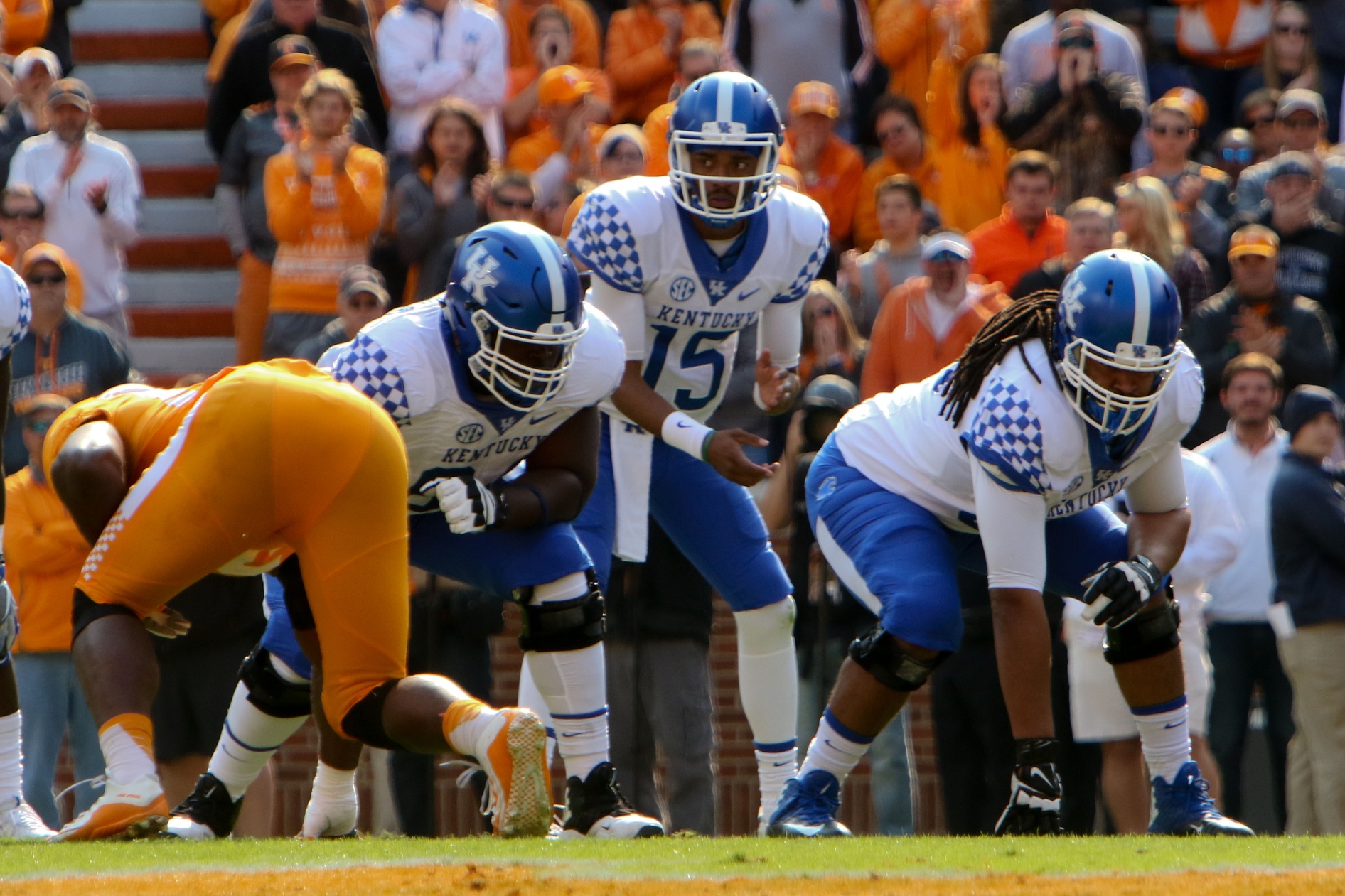 Kentucky has been running the ball well with Stanley “Boom” Williams and Benny Snell, but Johnson was only 12-of-29 for 192 yards with 0 TDs and 1 INT. It was his second start in a row completing 50 percent of his passes or less.

In seven starts, Johnson has failed to throw a touchdown pass five times. He’s averaging just 152.6 yards passing in those games, too.

Taking over for Trevor Knight, who will miss the rest of the regular season with injury, Hubenak was upset at home 29-28 by Ole Miss.

Hubenak’s numbers through the air weren’t too bad, as he was 16-of-27 for 213 yards with two scores and a pick, plus he added 30 yards on 9 carries. Texas A&M was missing something offensively, though. The explosiveness wasn’t there.

The Rebels got a lift after pulling the redshirt off Patterson. The Aggies might consider a similar move with Nick Starkel.

Nobody in the conference has thrown for more yards (2,811) than Lock. He’s also tied at the top for touchdown passes (21).

While most of his stats have been meaningless in 2016, at least he broke a five-game losing streak by defeating Vanderbilt. Lock played a pretty clean game, too: 22-of-37 passing for 294 yards with 2 TDs and 0 INTs.

Missouri finishes with Tennessee on the road and then Arkansas at home, so Lock is looking at 1-7 in league play unless he pulls an upset.

After beginning his South Carolina career with three wins and a TD-to-INT ratio of 6-to-0, Bentley was a 20-7 loser at Florida.

The true freshman was 18-of-33 for 213 yards with no scores and his first pick as a Gamecock. Also, a lot of Bentley’s yardage came late in the fourth quarter with the Gators loosely protecting a three-touchdown lead.

For the first time, Bentley actually played like a kid who should still be in high school. Let’s see how he responds after his first defeat.

Thrust back into the starting lineup with Luke Del Rio sidelined a second time, Appleby was sharp early in a win over South Carolina.

He didn’t have to do much after halftime, as Jordan Scarlett was running the ball effectively and his defense was shutting down the aforementioned Bentley, but Appleby finished 17-of-21 for 201 yards with a pair of scores and a lone pick.

Del Rio was really playing poorly prior to getting injured again, so it’s reasonable to think that Appleby starts the rest of the year.

LSU ran the ball 51 times for 390 yards and 5 touchdowns in a 38-10 beatdown of Arkansas. Etling’s arm got plenty of rest as a result. 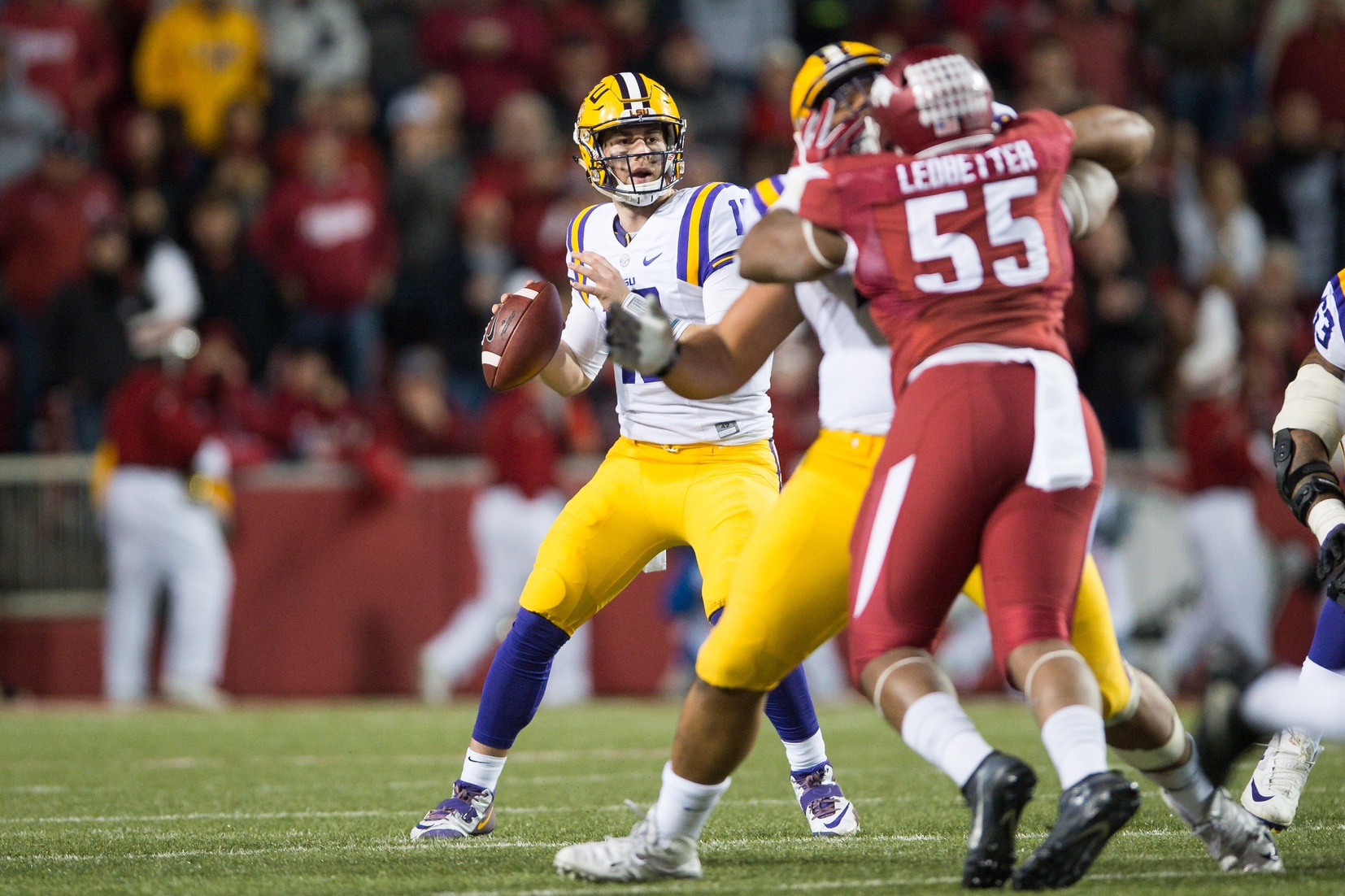 When he was asked to take to the air, the Indiana native connected on 10-of-16 throws for 157 yards. He may not have found the end zone, but he wasn’t picked off either. Etling was once again relegated to game-manager duty.

He’ll likely have to make more plays in the passing game with Florida coming to Baton Rouge. The Gators are excellent stopping the run.

Even after a 51-3 shellacking at Alabama, Fitzgerald shouldn’t feel too bad. Not many passers have success against the Crimson Tide.

He did put together a horrid stat line, though. He was 10-of-33 passing for 145 yards with 0 touchdowns and 1 interception. Arguably the premier running quarterback in the SEC, he was held to 15 yards on 11 carries.

Of the dozen QBs in the conference that qualify, Fitzgerald is 11th with a 53.3 completion percentage and tied for 10th with 6.5 yards per attempt.

No longer the top-rated passer in the league, White fell behind the injured Kelly after laying an egg in a 13-7 defeat at Georgia.

With his ground assault not having its usual success, White couldn’t make up the difference in the air. Just 6-of-20 for 27 yards, he also threw an interception that the Bulldogs returned for six. It was their only TD of the game.

When White woke up last Saturday, Auburn was alive in the West race. But when he went to sleep, ‘Bama had clinched the division.

Freeze scrapped his initial plan to redshirt Patterson once Kelly was shelved with a torn ACL. Desperate times, desperate measures.

Criticized by some for the move, as there were only three games left on the schedule, Freeze clearly made the right decision. Patterson was brilliant at times against Texas A&M, throwing for 338 yards and mixing in 64 more on the ground.

Is it ludicrous for Patterson to be ranked fifth after a single start? Probably. But tell me a QB ranked 6-14 you’d rather have right now.

That being said, the potential is clearly there. In that upset of Auburn, he was 20-of-31 for 208 yards. Most important, he methodically led a couple of scoring drives in the second half that proved to be the difference.

With better protection up front and another receiving option or two out wide, Eason could really turn into something special in 2017.

Since ending a three-game losing streak, Dobbs has thrown 6 TDs against just 1 INT in wins over Tennessee Tech and Kentucky. 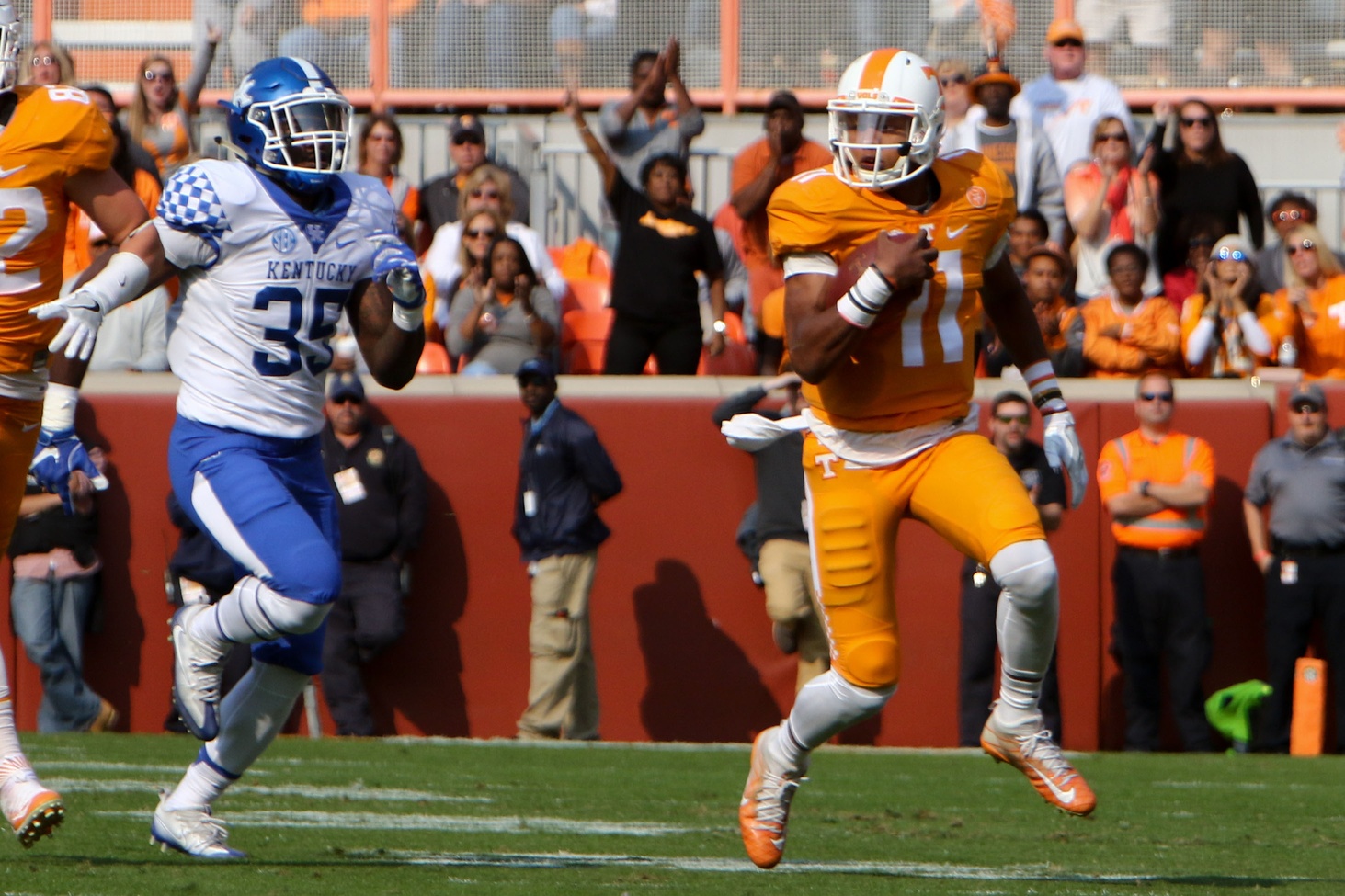 Against the Wildcats, he threw for 223 yards, ran for an additional 147 and was responsible for 5 total touchdowns. His 21 scoring passes are now tied for most in the SEC, plus his 7 rushing scores are fourth among quarterbacks.

Considering how quickly Tennessee’s season was cratering, highlighted by the Jalen Hurd transfer, Dobbs may have saved Butch Jones’s job.

It’s borderline unfair to pin the loss to LSU on Allen, as the Arkansas rushing D had no answers for Leonard Fournette and Derrius Guice.

Still, Allen was only 15-of-31 passing for 210 yards with 1 TD and 2 INTs. Following a four-game stretch in which he wasn’t intercepted, he has now been picked off eight times in his last five outings — three of them losses.

In his first seven starts, Allen threw multiple touchdown passes every time. But in his last three, he’s fired a total of two.

As if the first-year phenom hadn’t been impressive enough, Hurts is coming off one of the top statistical performances in Alabama history.

Not even a year removed from high school, Hurts became the first Crimson Tide player ever to throw for 300 yards and run for another 100 in the same game. Mississippi State was helpless, as he moved the ball at will from start to finish.

A cold-blooded killer for the No. 1 team in America, Hurts has now thrown for multiple TDs in six games and run for multiple scores in three.