The excitement generated by true freshman Shea Patterson took a step back this past Saturday after Ole Miss’s loss at Vanderbilt.

While the five-star phenom didn’t play too badly, his receiving corps — not to mention his sieve of a defense — didn’t help him out much and had a case of the butterfingers. Patterson certainly is fun to watch, though.

As for the rest of the SEC at the game’s most important position, senior Joshua Dobbs did it all in his final appearance at Neyland Stadium. He threw for 3 touchdowns, ran for 2 more and even led the band in a rendition of “Rocky Top” after a 63-37 mauling of Missouri. Since that three-game losing streak, he’s been red hot.

Despite the fact that there’s only one week left in the regular season, we’re still seeing a lot of movement up and down this list. Mississippi State’s Nick Fitzgerald in particular has been all over the place this season.

Here are my quarterback rankings entering Week 13. No matter what happens in the Iron Bowl, the top spot has been settled for 2016.

Johnson only had to throw 9 passes in Saturday’s a 49-13 win over Austin Peay, although he did hit on 5 of them and had 2 touchdowns.

The reason he slipped into the cellar this week is the fact that Kentucky clearly asks almost nothing of him through the air. The Wildcats have run the ball exceptionally well recently, so Johnson has done little more than hand it off.

Of the 12 QBs that qualify, Johnson’s completion percentage of 53.9 is second to last, even with all those safeties creeping down into the box. 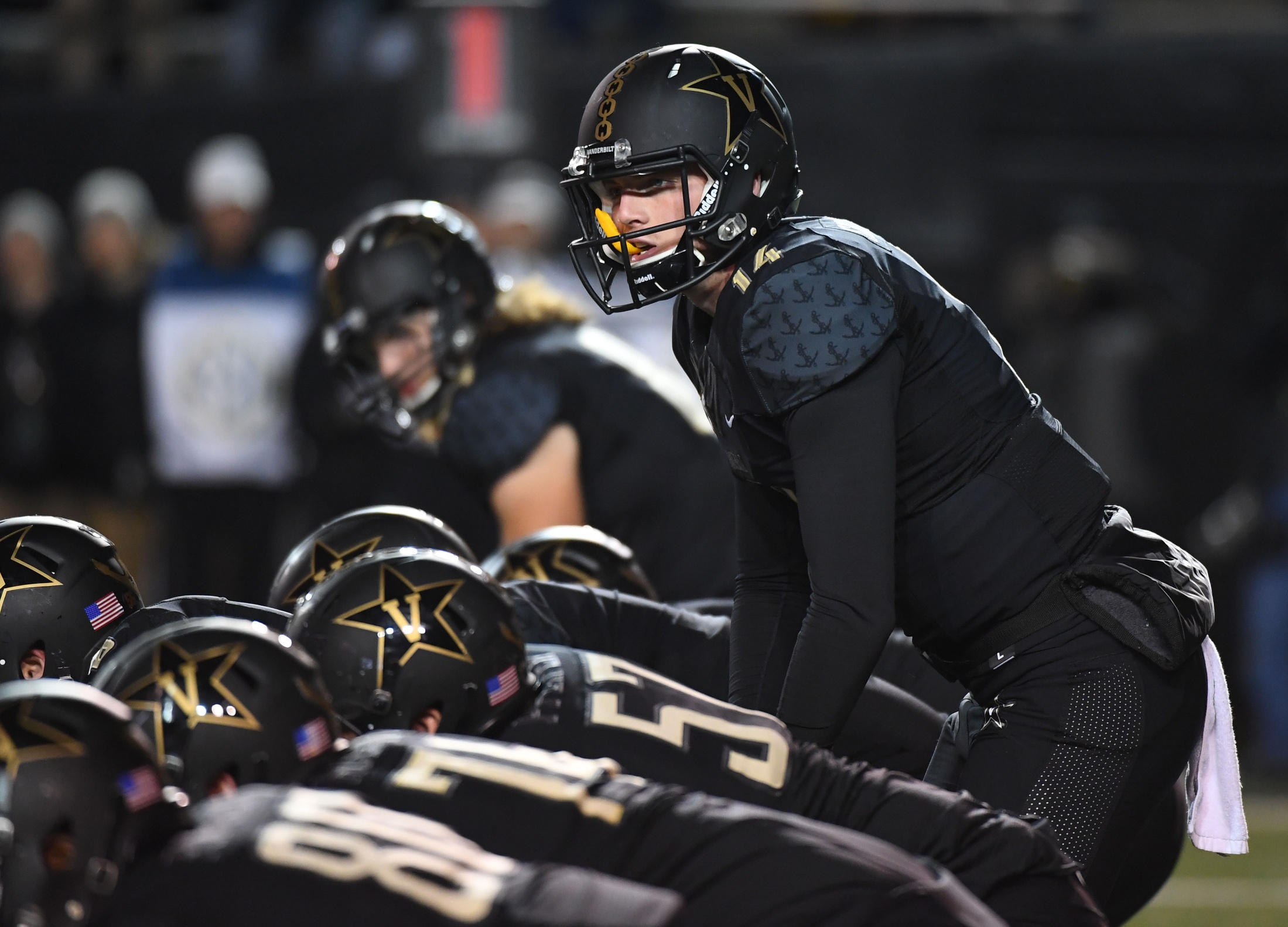 Despite doing so twice in five games last season, Saturday was the first time in 11 outings this year that Shurmur threw multiple scoring passes. In was only the third time in 2016 that his TD-to-INT ratio was positive, too.

But it wasn’t just a strong statistical performance. There looked to be genuine growth from Shurmur in what was an impressive win.

For the fourth time in 11 games this year, Lock completed less than 50 percent of his throws in a 63-37 blowout loss at Tennessee.

Yes, he crossed the 300-yard plateau for the fifth time this season, but once again there were a lot of empty yards. Missouri lost the turnover battle with the Volunteers 4-0, including two more interceptions from Lock.

While he leads the SEC with 3,131 yards passing, Lock’s raw numbers really aren’t indicative of his overall play.

Continuing a trend started by Trevor Knight, Hubenak failed to complete 60 percent of his passes for a second straight week. Even if 19-of-32 isn’t a bad showing, coach Kevin Sumlin’s system tends to be more quarterback-friendly than that.

Much like Hubenak wasn’t given a legitimate shot to win the job as a junior, there’s little reason to think he’s the guy next year as a senior.

Florida walked out of Death Valley with a 16-10 win over LSU, although Appleby’s performance had very little to do with it.

The Purdue transfer connected on just 7-of-17 balls. However, he was at least partially responsible for the play of the game offensively, a 98-yard scoring strike to Tyrie Cleveland that gave the Gators their first lead.

Because the injured Luke Del Rio wasn’t productive, Appleby might hold on to the gig for the rest of 2016. He’s not much of an upgrade, though.

The other former Boilermaker signal caller on display at Tiger Stadium, Etling was 14-of-25 for 204 yards in the defeat to Florida.

Trailing by six on the game’s final drive, he managed to get LSU down to the 1-yard line. But the closer the Bayou Bengals got to the end zone, the less confidence the coaching staff appeared to have in Etling’s arm.

With the Gators so geeked up to stop the run, chances are any sort of play-action pass from Etling would have been wide option. 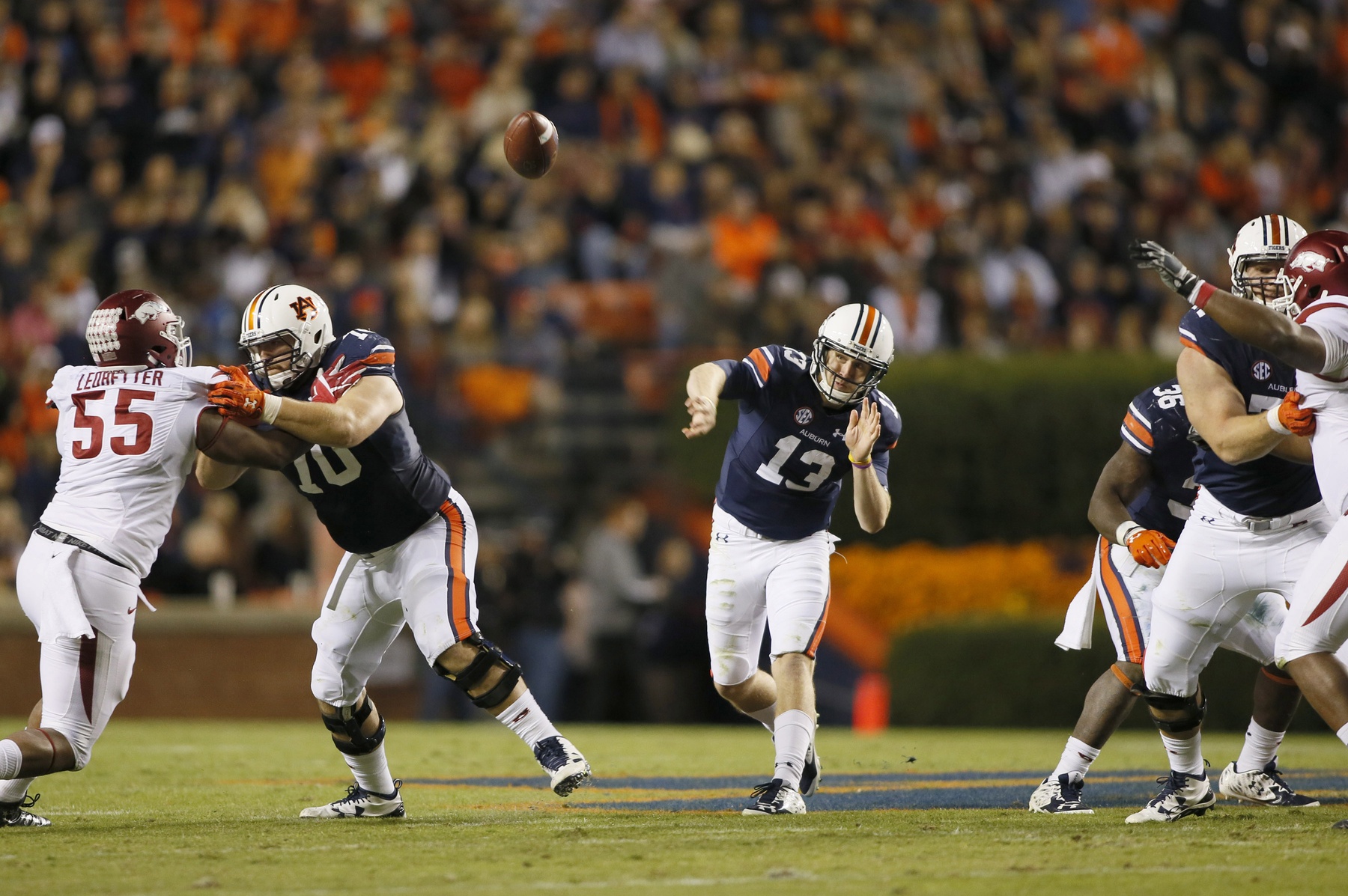 Jeremy Johnson, the subject of so much ridicule on The Plains, got the start and totaled 3 total touchdowns on Senior Day. Nevertheless, we have no idea at this point who will be at the controls when the Tigers go to Tuscaloosa in Week 13.

It could be White. It could be Johnson. It could even be the mercurial John Franklin III. Surely, a healthy White is coach Gus Malzahn’s best option.

Bentley is 4-1 in five starts, helping turn around what was a lost season for South Carolina. The Gamecocks are now bowl eligible.

He wasn’t asked to do much in a 44-31 victory over Western Carolina, but he was an efficient 14-of-23 for 154 yards. Bentley did contribute to what was a big day for USC on the ground with 5 carries for 34 yards.

Up next for the ‘Cocks is intrastate rival Clemson. If Bentley is going to get the best of Deshaun Watson, he’ll need to go bananas.

After what Patterson did in his first career start, which was a comeback win over Texas A&M, plenty of No. 20 jerseys were in attendance at Vandy.

Unfortunately, Patterson wasn’t able to repeat that performance in a 38-17 disappointment to the ‘Dores. While he didn’t get into much of a rhythm on 20-of-44 passing, his receivers made it look worse with a bunch of drops.

No question about it, the future is bright at QB in Oxford. Ole Miss desperately needs to reach a bowl game to get Patterson more practice time.

Georgia seems to do better on the scoreboard when it relies less on Eason’s arm and more on all those legs in the backfield.

The blue-chip recruit was 13-of-19 for 165 yards with 2 touchdowns and 1 interception in a ho-hum 35-21 defeat of Louisiana-Lafayette. Three games in a row now, all wins, Eason has bettered his season average of 6.6 yards per attempt.

None of his numbers really jump off the page. That being said, the INT Eason fired Saturday was his first in five games.

In my opinion, the hardest QB to judge in the SEC this season is Fitzgerald. He’s been either awful or awesome, with very little in between.

The only thing that stopped him in Saturday’s 58-42 loss to Arkansas was his own defense, which put forth an embarrassing effort. Fitzgerald threw for 328 yards, ran for 131 more, totaled 5 scores and didn’t commit a turnover.

He’s still limited as a passer, which is partially a product of Mississippi State’s scheme, but he’s too prolific to rank any lower.

On Senior Day in Knoxville, Dobbs thrilled the home crowd of 101,012 one last time in a 63-37 mangling of Missouri. 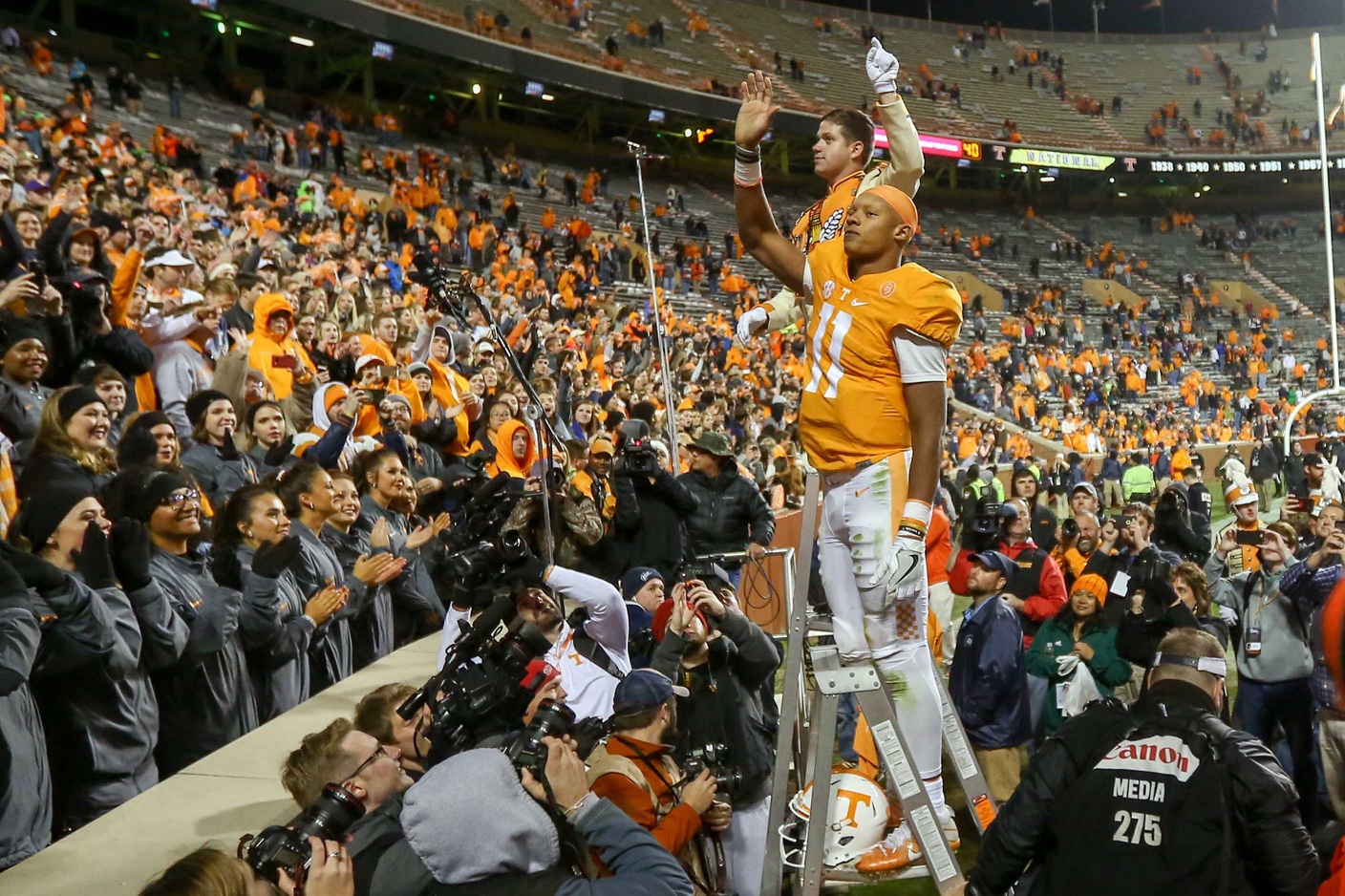 The Georgia native was 15-of-22 through the air for 223 yards with 3 touchdowns and no interceptions. It was his third game in a row with a trio of TD tosses. Dobbs sprinkled in a career-high 190 yards rushing and 2 additional scores.

The sun may have set on Tennessee winning the East, but it’s worth noting that Dobbs was at his best after the season went to hell.

For the first time in six games, Allen wasn’t intercepted. Having no giveaways certainly helped the Hogs push around Mississippi State 58-42.

Even if the Bulldogs are arguably the worst defense in the league, Allen was precise with his passing based on the numbers: 18-of-25 for 303 yards. He also threw multiple touchdown passes for an SEC-leading eighth time this season.

Allen has spread it around beautifully all year long. Four Arkansas pass catchers have between 29 and 55 receptions.

It took him a little while to get going, but Hurts threw for 136 yards with 3 TDs and 0 INTs in a 31-3 beatdown of overmatched Chattanooga.

As smooth a runner as there is in the nation at the quarterback position, Hurts was also credited with 68 yards on 16 carries. He’s now sixth in the conference with 2,168 yards passing and 14th with 803 rushing.

Up to 30 touchdowns responsible for on the season, Hurts is tied for second in the league with Fitzgerald. Only Dobbs (33) has more.