There were some truly dreadful performances at the quarterback position during Week 6 for the best conference in America.

Georgia’s Jacob Eason, oozing with talent but perhaps hitting the freshman wall, couldn’t get anything done in a sleepy win at South Carolina. Mississippi State’s Nick Fitzgerald was equally ineffective in defeat.

Balancing out the disappointment of Eason in the true freshman department was Alabama’s Jalen Hurts, who again proved to be mature beyond his years in a beatdown — on the road, no less — of Arkansas. While Austin Allen put up the gaudier statistics, Hurts controlled the game and led the Crimson Tide to victory.

The marquee matchup of the week, Tennessee at Texas A&M, produced up-and-down outings from Joshua Dobbs and Trevor Knight. They’re both great runners, but each made inaccurate throws and questionable decisions.

Here are my SEC quarterback rankings entering Week 7. Chad Kelly of Ole Miss solidified his grasp on the top spot by not playing.

Statistically, Shurmur threw the ball better in defeat for Vanderbilt than Stephen Johnson did in victory for Kentucky.

Nevertheless, just like QBs get too much credit for wins, they get too much blame for losses. Shurmur was 17-of-29 for 141 yards without a touchdown or an interception for the Commodores, albeit on the wrong end of a 20-13 decision.

Shurmur’s yards-per-attempt average of 4.9 was even more anemic that his season mark of 5.3, as Vandy has no vertical element to its passing game.

Less than effective through the air, Johnson connected on just 10-of-24 throws for a paltry 49 yards with no TDs and 1 INT.

Somehow, it was good enough to defeat Vanderbilt and even Kentucky’s record at 3-3 and 2-2 in the SEC. The 6-foot-2, 182-pounder did add 55 yards and a touchdown rushing for the Wildcats, who sat on a 17-3 halftime advantage. 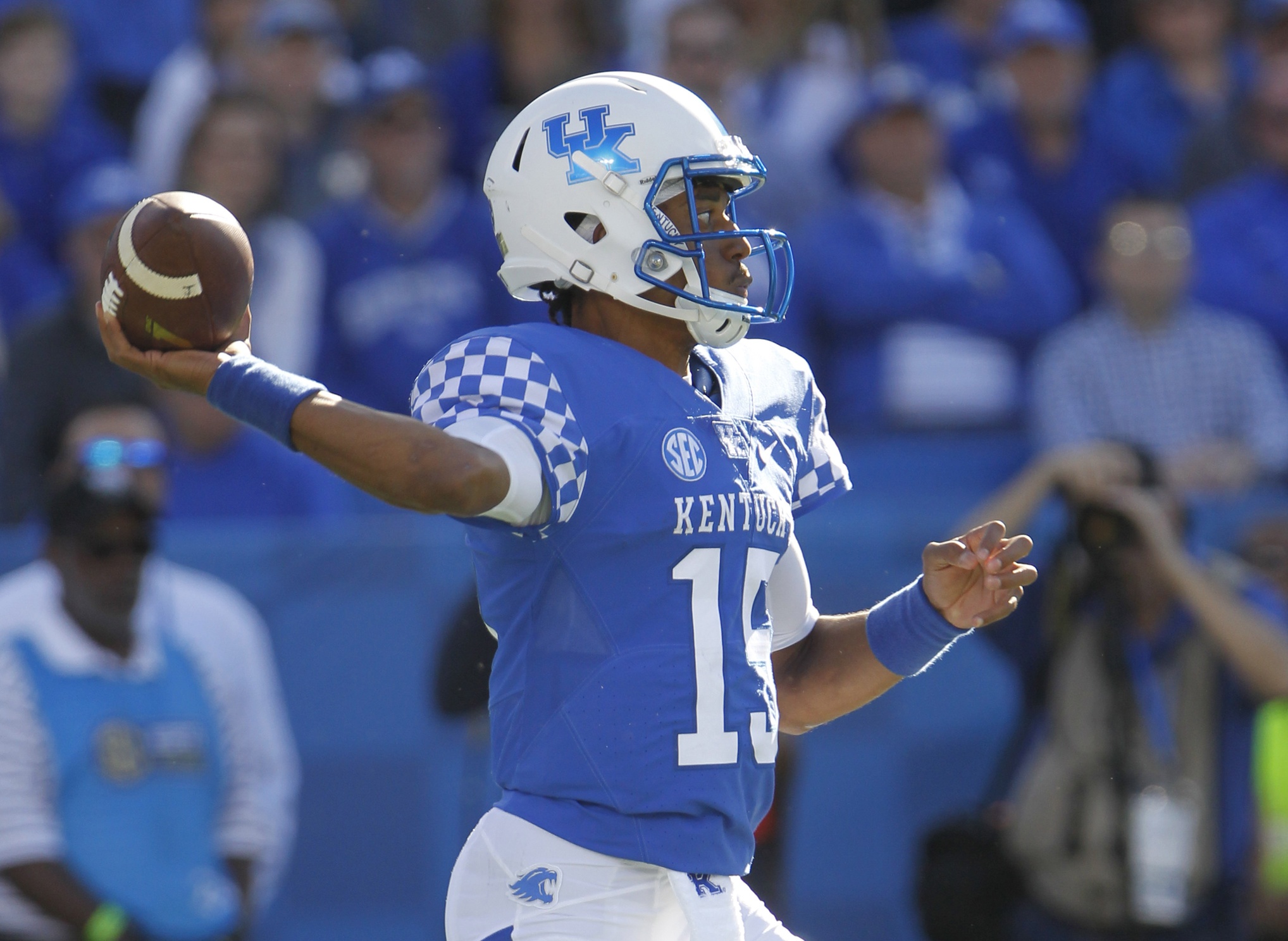 Since throwing for 310 yards in a relief effort back in Week 3, Johnson has only accounted for 273 yards passing combined in three starts.

Mississippi State failed to show up at home for Auburn, going to the locker room at halftime down a ridiculous 35-0.

While the Bulldogs’ defense deserves its share of the blame, as the Tigers went up and down the field at will, Fitzgerald was atrocious, too. He was 17-of-34 with 2 touchdowns, but he was aided by garbage-time numbers.

Fitzgerald doesn’t look like a natural quarterback. He shows no ability whatsoever to go through progressions on a traditional pass play.

South Carolina made another switch under center, as freshman Brandon McIlwain watched Orth from the sideline all game long.

As is his reputation, Orth got off to a slow start. The Gamecocks were shut out in the first half for the third time in six games, but he did lead two TD drives late to make a 28-14 loss to Georgia relatively interesting.

Orth was 26-of-36 for 288 yards. The question is this: Why does he have to be hopelessly behind in the second half before getting hot?

Florida’s game with LSU was postponed due to Hurricane Matthew, which sets up the possibility of Luke Del Rio returning to the starting lineup.

Appleby had two starts to prove to Gators coach Jim McElwain that he made a mistake not naming him the starter originally. He sure looked good for a half against Tennessee, but he fell apart late and then was ineffective for four quarters at Vanderbilt.

With Missouri on the schedule Saturday in Gainesville, it will have been four weeks since Del Rio’s knee injury. He’s sure to get his job back now.

With LSU being given an impromptu bye week, interim coach Ed Orgeron gets an extra seven days to transform the offense after the firing of Les Miles.

Orgeron stated that opening things up offensively was one of his first priorities upon becoming the top Tiger, and it showed in a 42-7 mauling of Mizzou back in Week 5. That was mostly the running game, though, not Etling’s passing.

Southern Mississippi visits in Week 7, but don’t look for Etling to light it up. The Golden Eagles are 10th nationally defending the pass.

As stated above, Eason was miserable Sunday at Williams-Brice Stadium. Just 5-of-17 for 29 yards, it looked even worse than that.

Fortunately for the Bulldogs, they ran the ball effectively facing a South Carolina defense that couldn’t match up in the trenches. Still, it’s difficult to overstate how poorly Eason played from start to finish. 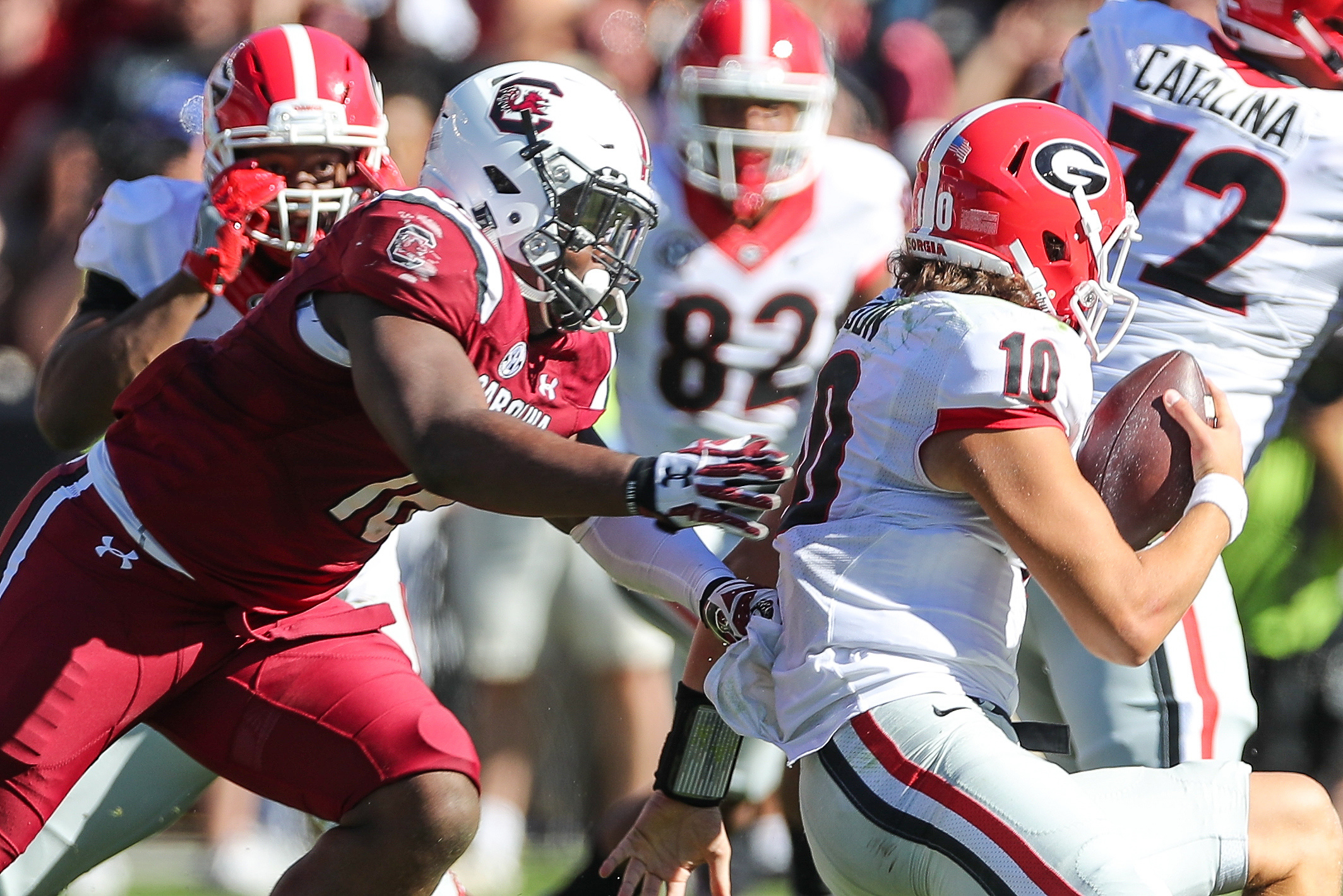 There’s every reason to believe that Eason will be the premier signal caller in the league one day. It’s just going to take longer than some expected.

In a dominant win over Mississippi State on the road, White was 14-of-18 for 214 yards with 1 touchdown and 1 interception. The TD was on a sprinting rollout to the left, while the INT bounced off the hands of his intended receiver.

Very quietly, now that all the John Franklin III whispers have been hushed, White is the third-rated passer in the SEC.

Even after sitting out this past Saturday on a bye, Lock still leads the conference with 1,675 yards passing.

The argument against Lock is that he’s padded his stats against poor competition. In league play against Georgia and LSU, he’s a combined 40-for-75 for 543 yards with 3 scores and 4 picks. Also, Missouri lost both games.

Lock has all the tools to be a lights-out thrower and isn’t afraid to push it deep. He needs to beat a team of consequence, though.

Perhaps no passer in the SEC is more of a yo-yo than Dobbs. He subjects Tennessee fans to dizzying highs and cavernous lows.

No question about it, without Dobbs and his dual-threat abilities, the Volunteers wouldn’t have been able to force overtime at Texas A&M after digging yet another early hole. But then his curious OT interception ended the proceedings.

Dobbs has a 58.3 completion percentage and a 14-to-8 TD-to-INT ratio through six games. Neither figure is particularly impressive.

Yes, Allen threw for an even 400 yards on 25-of-48 attempts against Alabama, although much of it was in desperation mode after being behind 28-7 early.

Once again, Allen stated his case as the toughest quarterback in the conference. The Crimson Tide knocked him to the turf more than two dozen times, yet after each one he got right back up and kept slinging the pigskin.

While Allen hadn’t thrown a pick since the season opener, he threw three against ‘Bama. He also lost a fumble that got returned for a TD.

Even after surviving Tennessee in double OT to remain unbeaten, Knight put some chinks in the armor on display at Kyle Field.

He’s yet to complete more than 57.5 percent of his passes in any of his six starts, no matter the competition. Knight’s 17-of-34 effort against the Volunteers included a lot of inaccurate short- and intermediate-range throws. 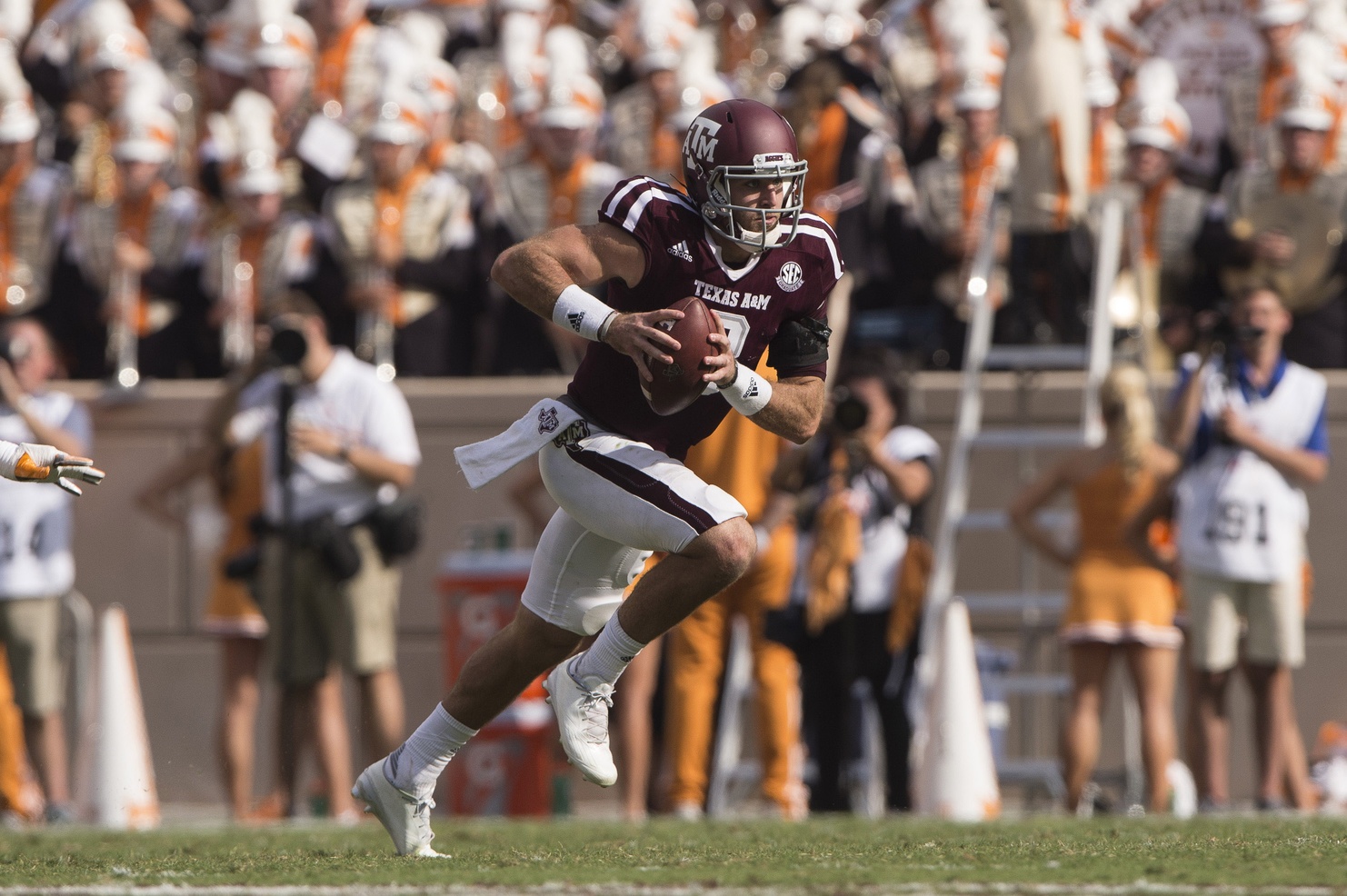 Knight is at his best exploiting one-on-one matchups downfield with jump balls and back-shoulder throws. He sure can run, though.

The true freshman completed a season-high 76.5 percent of his passes in that 49-30 throttling of Arkansas for 253 yards.

Hurts isn’t doing it with bubble screens and checkdowns, either. This young man isn’t afraid to let ‘er rip down the field, as evidenced by his yards-per-attempt average of 8.2 for the year. That’s better than Dobbs and Knight.

He exhibits a calm in the pocket unexpected from a player right out of high school. He’s leading the No. 1 team in the country yet seems unfazed by the moment.

Due to a trio of interceptions from Allen, Kelly is now the most efficient passer in the league despite not playing in Week 6.

The most explosive QB in the SEC by a wide margin, Kelly can put points on the board in the blink of an eye when he’s feeling it in the pocket. He’s not running as productively as he did in 2015, but he’s a passer first anyway.

In what should be a fun game to watch for anybody who enjoys flying the friendly skies, Kelly faces Allen in Fayetteville this week.