Week 8 SEC Primer: Feleipe's back in town, but this is Kyle Trask's team and Florida's time

Florida (4-1) is in the Playoff hunt. Arkansas (3-3) is angling for a signature upset to punctuate its rapid ascent from the ashes. But the fact is, amid a nationwide coronavirus surge, it feels like a grim feat that this game is even going to get played.

And who knows? I’m writing this mid-week, shortly after the SEC announced its 4th postponement of the weekend, adding Georgia/Missouri to a list that already included Alabama/LSU, Tennessee/Texas A&M and Auburn/Mississippi State, all due to COVID-19 issues on one or both rosters. By Saturday morning, any of the 3 remaining games on the slate could potentially be called off, too. Arkansas head coach Sam Pittman is isolating at home after two positive tests and isn’t expected to make the trip to Gainesville. The post-Halloween incubation period is coming due and reverberating across the league.

As narratives go, Florida’s championship prospects and Feleipe Franks‘ return to The Swamp in an opposing uniform are footnotes compared to a pandemic that is once again wreaking havoc on the logistics of a conference schedule that is fast running out of wiggle room ahead of the “finish lines,” in the words of commissioner Greg Sankey. The next round of setbacks will result in outright cancelations, a bridge other Power 5 conferences have already crossed. The SEC, which just released updated tiebreaker scenarios that take into account the likelihood that some teams may wind up playing fewer games than others, is bracing to follow suit. At the rate it’s going, this week may be the last one when avoiding that fate seems like even a remote possibility.

That’s the pass efficiency rating of opposing quarterbacks vs. Arkansas’ defense this season, best in the SEC and a monumental improvement over the previous 5 seasons, when the Razorbacks consistently ranked at or near the bottom of the conference. Under first-year coordinator Barry Odom, the Hogs have shaved 3 full yards off their average yield per pass (6.0 this year, down from 9.1 vs. SEC opponents in 2019), broken up nearly 3 times as many passes (35, up from 12 last year), and come down with more interceptions (12) than in the previous 3 years in SEC play combined (11). 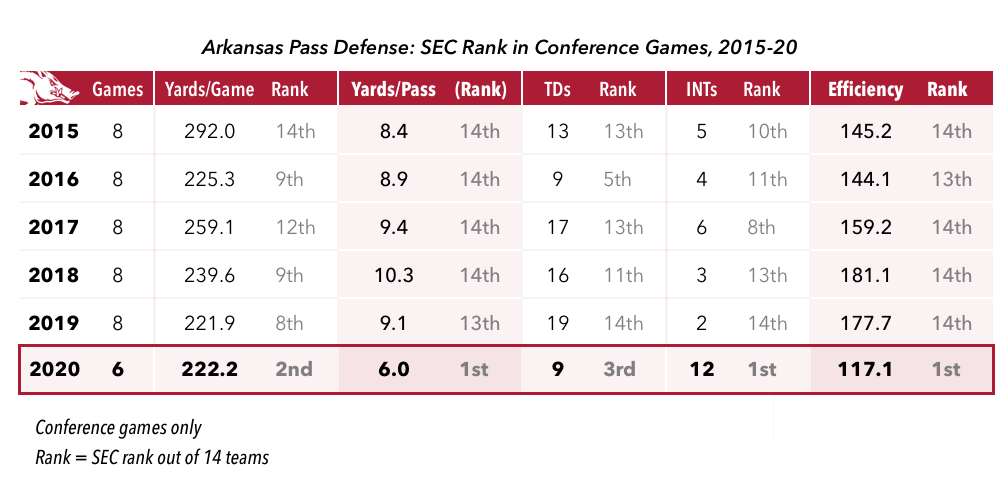 The takeaways, especially, have been integral to the team’s overall turnaround, with 11 of the 12 picks coming in the 3 wins over Mississippi State, Ole Miss and Tennessee, including 3 pick-6 TDs that supplied the winning margins against the Bulldogs and Rebels.

Catalon, the reigning SEC Defensive Player of the Week for his efforts against Tennessee, has been something of a revelation on the back end as a redshirt freshman; in addition to 2 INTs, he’s forced a couple of fumbles and leads the conference in solo tackles with 36. (Catalon was also sorely missed in the Razorbacks’ loss at Texas A&M after being ejected for targeting in the first quarter; the Aggies ripped off 5 consecutive touchdown drives in his absence, more than Arkansas has allowed in any other game.) But Odom’s zone-heavy approach also relies on his swarming inside linebackers, Grant Morgan and Bumper Pool, who rank 1st and 2nd in the SEC in total tackles and have proven to be extremely active in underneath coverage.

Of course, “active” and “capable of wrangling Kadarius Toney in the open field” are not quite the same thing. For all their other failures last week, Georgia’s linebackers did an admirable job hemming up the Gators’ dynamic catch-and-run threat, limiting him to a season-low 40 scrimmage yards on just 4.0 per touch. Morgan and Pool aren’t nearly in the same class athletically as the Bulldogs’ inside tandem of Monty Rice and Nakobe Dean, but they are assignment-sound vets with a reputation as sure tacklers. If that holds against Toney it will be a heroic achievement.

The big question: How does Florida replace Kyle Pitts?

Pitts was knocked silly last week on a kamikaze shot by Georgia DB Lewis Cine, sidelining both of them for the rest of the game and potentially for much longer. Pitts is questionable to play on Saturday, according to Dan Mullen, but given that we’re talking about an aspiring first-rounder recovering from a concussion, it would be fairly shocking if he did. More likely, the conventional tight end role will fall to Kemore Gamble and Keon Zipperer while the role of unstoppable downfield mismatch remains vacant.

There’s certainly no shortage of viable targets on Florida’s offense, beginning with Toney, who is as dangerous with the ball in his hands as any player in the college game. QB Kyle Trask is a distributor par excellence. But Pitts’ specific strengths — his freakish combination of size and body control on contested catches — are largely irreplaceable, even by the Gators’ other big, athletic wideouts, Trevon Grimes (6-4/218) and Justin Shorter (6-5/225), whose combined production this season falls well short of Pitts’ alone. Grimes, an Ohio State transfer who began his career as a borderline 5-star recruit, has flashed some intriguing jump-ball potential …

What a snag Trevon Grimes pic.twitter.com/MtL8hGWZve

… but has generally been consigned to a possession role, good for roughly 2 to 4 catches per game for somewhere in the neighborhood of 40 yards. Shorter, a Penn State transfer who was a 5-star all the way, is in a similar, slightly smaller boat. If Pitts is in for an extended absence, establishing another go-to guy on the outside who keeps opposing DBs awake at night is a top priority over the next few weeks.

Pending an unexpected upswing by Tennessee and/or LSU by December, Arkansas is arguably the most dangerous opponent on Florida’s remaining schedule, and the specific circumstances on Saturday — with the Gators coming off a season-defining win over a longstanding rival, and likely missing their best player — could lend themselves to a potential letdown. The Razorbacks are opportunistic enough on defense to keep things interesting and boast more than enough firepower on offense between Treylon Burks, Mike Woods and De’Vion Warren to make plays against an occasionally vulnerable Florida defense.

Collectively, Burks, Woods, and Warren are averaging more than 15 yards per catch with 10 touchdowns. If Florida struggles defensively to the extent it did earlier in the season against Ole Miss (35 points on 613 total yards) and Texas A&M (41 points on 543 yards), Arkansas can do similar damage.

Florida’s pass rush is a strength, recording 3 sacks in each of the Gators’ 4 wins, along with a steady diet of pressure from bookends Brenton Cox Jr. and Zachary Carter.

For Trask, the challenge against Arkansas’ zone defense is to remain patient enough to take what the coverage gives him and force the Razorbacks to pick their poison. For Franks, the challenge may be simply remaining upright.
– – –

South Carolina hit reset at quarterback this week in the wake of a 48-3 debacle vs. Texas A&M – its worst home loss in 17 years – opening up the competition between incumbent Collin Hill, 2019 starter Ryan Hilinski and true freshman Luke Doty. But the issues behind center are only one aspect of what has truly been an equal-opportunity collapse.

The running game, a strength for much of the season, stalled out against A&M, managing just 50 yards on 2.0 per carry; meanwhile, the Aggies’ offensive totals against the Gamecocks defense (264 yards rushing, 266 passing on 7.4 per play) were virtually identical to LSU’s output (276 rushing, 265 passing on 7.2 per play) their last time out. Carolina was outscored by a combined 100-27 in those games, easily its worst margin in back-to-back losses in Will Muschamp‘s tenure.

Not the most opportune moment, in other words, to be facing an Ole Miss offense that ranks among the SEC’s top 3 in every relevant category. Notably, that list includes rushing offense, where the Rebels (high-flying rep notwithstanding) have emerged under Lane Kiffin as the most run-oriented attack in the conference. Matt Corral will get his through the air, and draft watchers will love the next-level match-up of Ole Miss WR Elijah Moore and South Carolina CB Jaycee Horn. But the most telling line in the box score will belong to Jerrion Ealy and Snoop Conner.
– – –

Kentucky remains a substantial favorite here despite a solid month of dismal offensive outings defined the league’s most toothless passing game, which says all you need to know about Vandy. The Commodores let a golden opportunity for their first win slip through their fingers last week at Mississippi State, blowing a 478-204 advantage in total offense by finishing -5 in turnover margin in a 24-17 loss.

The sledding will be much tougher against Kentucky’s defense, and the schedule only gets steeper from there.
– – –