Where does each Power 5 league stand in Playoff race? Updated percentages released

With September dominance from Alabama, Georgia, LSU and Auburn, there seems to be a growing debate of whether the SEC can land three teams in the College Football Playoffs.

But according to Massy-Peabody, the chances of the SEC taking 75 percent of the playoff spots this year have actually gone down since the preseason.

As stated in the tweet, the strength of Ohio State and Oklahoma has dropped the likelihood of three SEC teams down. Remember, LSU, Alabama and Auburn all have to play each other, and Auburn will face Georgia as well.

Other interesting takeaway points from the graph are the playoff-likelihood percentages for the ACC and Pac-12. Clemson was the top team in the country a week ago and is still the defending champion, but the ACC has just a 50-50 split on whether they’ll even get one team. Meanwhile, the Pac-12 has virtually no chance of having a team in the playoffs.

So it appears SEC fans hoping for a playoff full of SEC teams will have to root against Ohio State and Oklahoma in October and November.

Here is the chart recently shared by Massy-Peabody on Twitter: 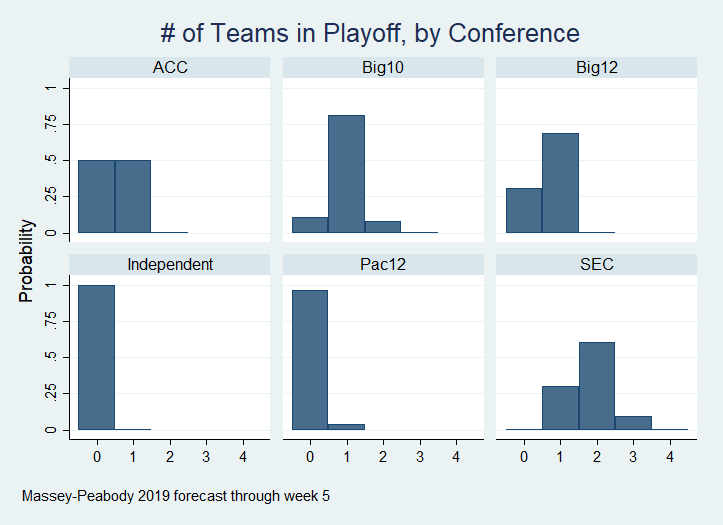