South Carolina could make its long-awaited return to black uniforms this weekend against Tennessee according to defensive lineman Gerald Dixon who leaked the info during Tuesday’s press conference previewing the matchup with the Vols:

Defensive end Gerald Dixon said the team is "supposed" to be wearing some black this weekend. #Gamecocks

Steve Spurrier fields uniform questions almost weekly on his radio call-in show and it appears the fanbase’s request will finally be answered.

If we pull this Houdini magic trick it will be epic, I will say that…

"Supposed" – generally assumed or believed to be the case, but not necessarily so.

Before Spurrier’s arrival in 2005, black was a primary color on gamedays.

Under Spurrier, South Carolina has worn white shells throughout and only seven times has taken the field in black jerseys — 2006 vs. Tennessee, Georgia and Mississippi State, Florida (2009), Florida (2007), Kentucky (2007) and Auburn (2011).

The Gamecocks haven’t worn black jerseys since a 2011 home loss to Auburn when officials made the team switch to its base alternates after camouflage numerals on Wounded Warrior threads were deemed to difficult to read during pre-game warmups. 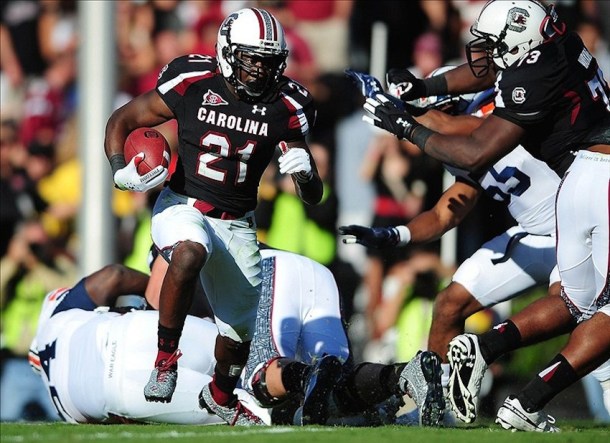 The Vols unveiled black alternate jerseys with orange numbers during a win over South Carolina in 2009, so the Gamecocks are returning the favor perhaps. It was Lane Kiffin’s only season in Knoxville.

We’ve created a potential look for Saturday’s game against Tennessee: