After what was billed last summer as coach Will Muschamp’s best team, with a roster that had “competitive depth” for the first time in several years, the 2019 season didn’t live up to what many thought in the preseason.

There were a host of key injuries to skill position players, most notably QB Jake Bentley, which accelerated the timetable for Ryan Hilinski. The Gamecocks also gave up second-half leads to North Carolina, Florida and Tennessee.

Of course, the Georgia upset is the main highlight from this season as the Gamecocks shocked the college football world, and that win still reverberates through the College Football Playoff discussion. But one of the main criticisms is how Muschamp and Co. couldn’t duplicate that effort even against the likes of Appalachian State at home.

Why? When Hilinski took over after Bentley suffered a season-ending foot injury against North Carolina, many fans figured it was a blessing in disguise as Hilinski appeared to be an upgrade over Bentley, who developed a reputation for throwing a lot of interceptions. Hilinski threw for 324 yards against Alabama, with 2 touchdowns and an interception. But those positive vibes quickly evaporated at Missouri, when Hilinski misfired on several throws, and it later came out that he had an elbow injury. Dakereon Joyner rescued the Gamecocks at Georgia after Hilinski suffered his own leg injury. While Hilinski put up some numbers, such as 300 yards-plus against Tennessee and App State, he was fairly uneven overall. That is not surprising for a freshman thrust into the starting role. 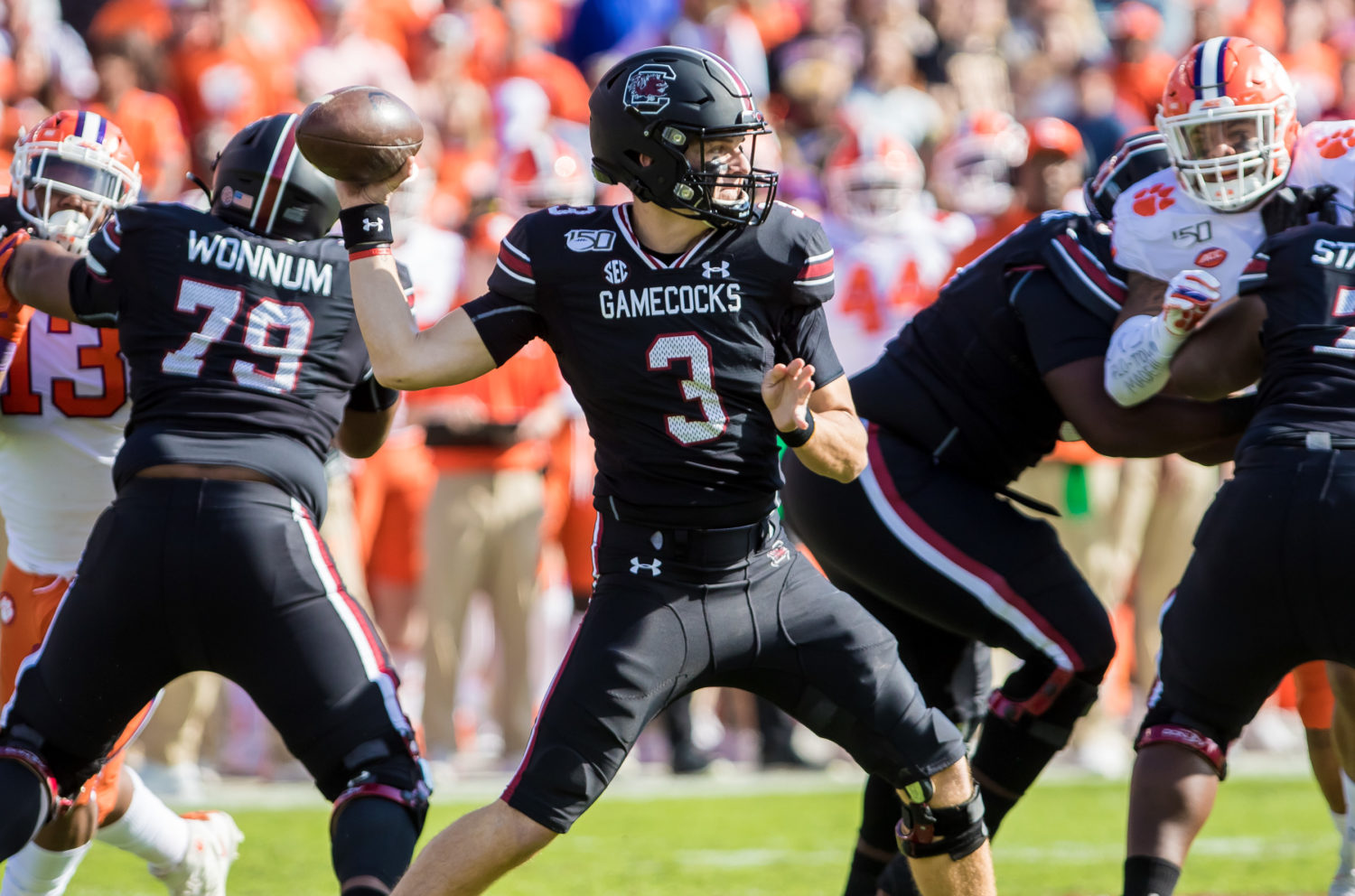 Ryan Hilinski, thrust into a starting role because of injury, has been unsurprisingly inconsistent. Photo by: Jeff Blake-USA TODAY Sports

Why? This is another part of the team that started strong but stumbled down the stretch, with less than 50 rushing yards against App State and Texas A&M. The Gamecocks also mustered just 78 yards at Tennessee. They had just 1 total rushing touchdown against Vanderbilt, App State and A&M. Part of the problem was that Tavien Feaster and Rico Dowdle each missed two games with injuries. But it also continued a troubling trend: The Gamecocks haven’t had a 1,000-yard rusher since Mike Davis in 2013.

Why? Much of this is based on Bryan Edwards’ record-breaking season, in which he seemingly set a record each week. Entering the Clemson game, Edwards was second in the SEC in receptions and fifth in yards per game (82). Keep in mind, he also played in only 10 games after he sat out the Texas A&M game. The trouble is, while Shi Smith missed 2 games, he had just 43 catches as the second-leading receiver on the team. Leading tight end Kyle Markway, meanwhile, played in every game but registered just 31 catches. While the Gamecocks were fifth in the SEC in passing yards per game (233) entering the finale, they were 11th in the SEC with just 12 passing touchdowns. 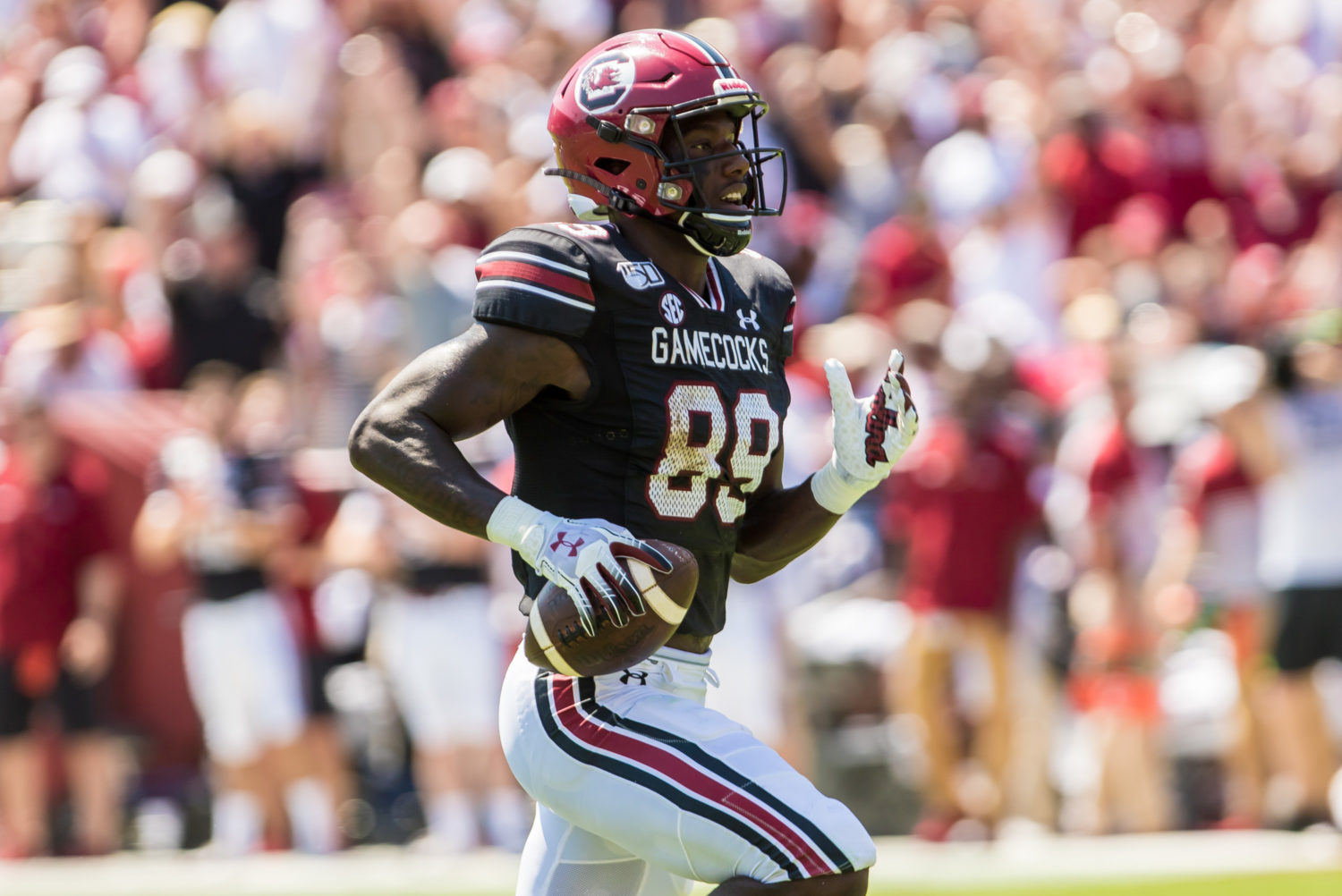 Bryan Edwards was one of the SEC’s top receivers and one of the best in program history. Photo by: Jeff Blake-USA TODAY Sports

Why? At least twice this season, and perhaps a third time against Clemson, the Gamecocks shuffled the offensive line. Among the changes were Jordan Rhodes at left guard, Jovaughn Gwyn at right guard and Donell Stanley at center. There was also talk of moving tackle Sadarius Hutcherson back to guard and getting Jaylen Nichols back in the lineup. The running game struggled, and the Gamecocks went into the finale eighth in the SEC with 23 sacks allowed (and then gave up 2 more against Clemson). An injury to Dylan Wonnum at right tackle really caused problems, particularly against Tennessee. Youth could have been an issue, as the unit boasted just one senior and one junior among the two deep.

Why? Perhaps one of the few bright spots for the Gamecocks was the play of the defensive line, which was largely seen as the key to the Georgia upset. The unit was largely consistent, as the D-linemen had at least 2 sacks in every game but Tennessee, Charleston Southern and Clemson. In fact, South Carolina had two players in the top 10 in the SEC in sacks in Javon Kinlaw and Aaron Sterling, with 6 each. Muschamp spoke about the unit at a press conference in early November. 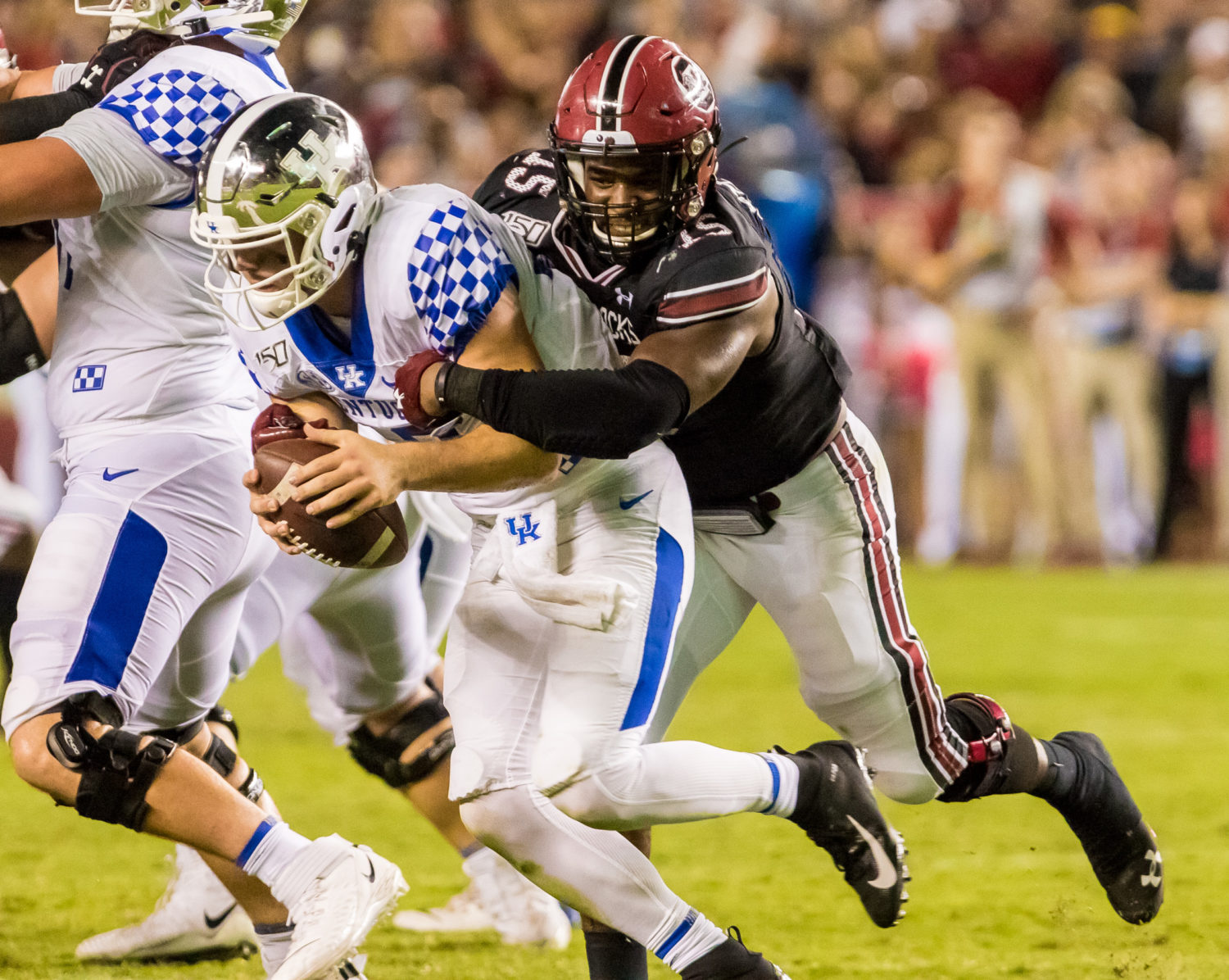 “Being really unselfish and understanding that based on how we want to call a game,” Muschamp said. “Understanding you may not be the feature part of the game, but do your job and be willing to eat two blocks, and you may end up being the free guy at the end of the day. I think that this has been a very unselfish group as far as those things are concerned. Sometimes, in order to eat the double team, which Javon’s had to do and never complained and created one-on-one for somebody else, and he understands that, and anybody that knows ball watching the film understands that. So those are all things that I’ve really been pleased with how unselfish the group has been to understand those things.”

Why? Ernest Jones as a sophomore was a pleasant surprise as the SEC’s fifth-leading tackler. He was named the most improved player on special teams in the spring, but it’s at linebacker where he was most consistent. Jones had four games of double-digit tackles and three more with 9. T.J. Brunson had a solid season with 77 tackles next to Jones’ 97. Brunson had three games of double-digit tackles. Jones also had 2 interceptions and Brunson had 1.

Why? Another microcosm of the team was the secondary, as it looked like a world-beater against Georgia on the strength of 3 picks from Israel Mukuamu. However, the Gamecocks also gave up 295 passing yards in that game. Mukuamu hasn’t had an interception since. The rest of the secondary showed flashes, but youthful mistakes also were exposed. Jaycee Horn and Jammie Robinson saw plenty of playing time to leave Gamecocks fans optimistic about their future. At ninth in the SEC in passing defense, the Gamecocks were okay, but not much above average against the pass. 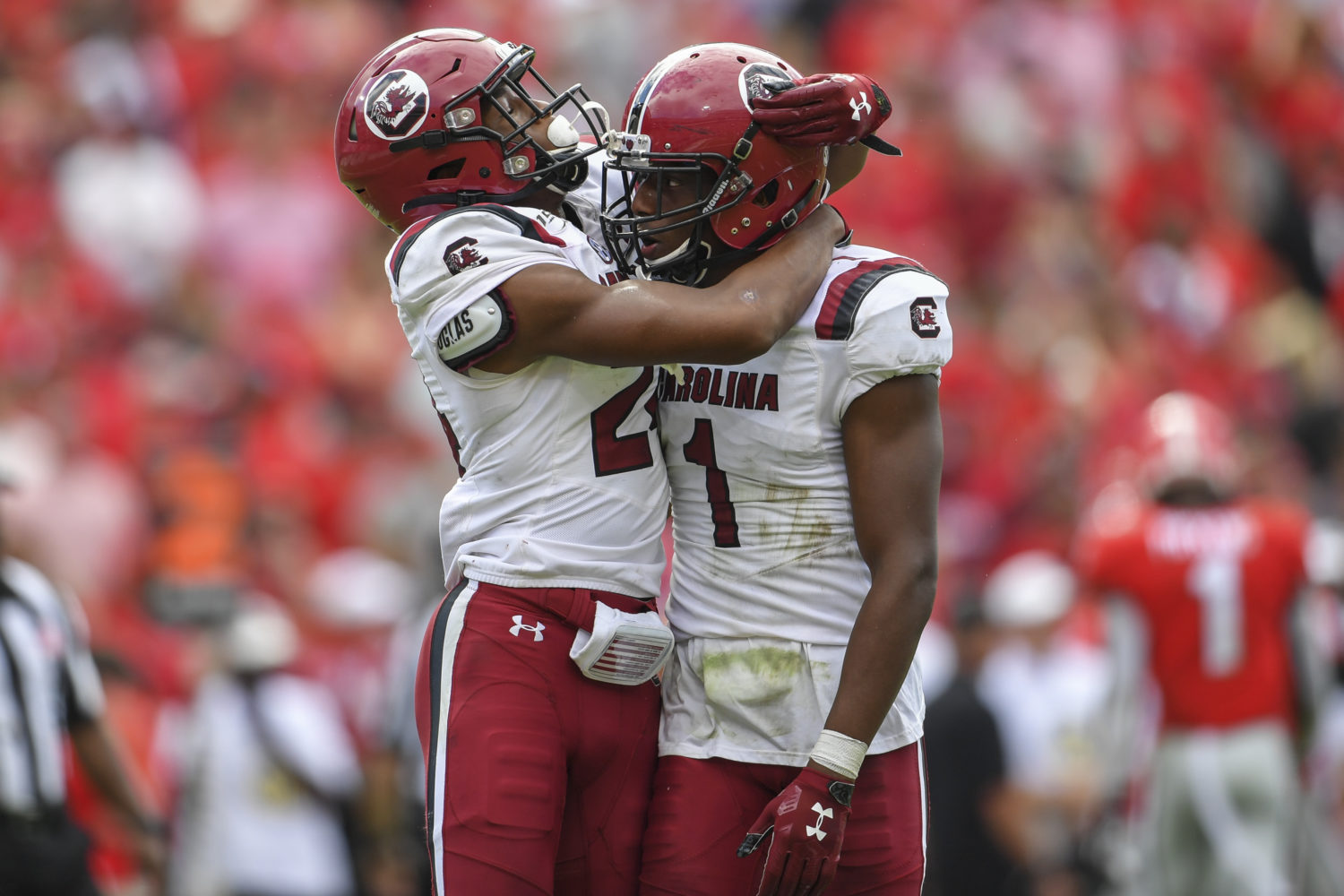 Israel Mukuamu, left, had 3 of his 4 interceptions this season in the upset of Georgia. Photo by: Dale Zanine-USA TODAY Sports

Why? Parker White and Joseph Charlton as a tandem were two of the best in the SEC at kicking and punting. White was 18-of-22 on field goals, while Charlton was narrowly second in the SEC with a punting average of 47.7 yards. White’s 2-for-4 effort at Georgia was just enough to spring the upset. While the Gamecocks don’t register among SEC leaders in punt returns, Smith was second in the league at 21.9 yards per kick return, and an average of nearly 30 per game.

Why? Inconsistency and poor late-game adjustments ruined this season. The 1-3 start was indicative of that poor coaching, as the Gamecocks realistically should have beaten North Carolina or Missouri. Muschamp tweaked the defensive alignment after the Missouri loss, and the team had serious momentum after wins over Kentucky and Georgia. But then games against Florida and Tennessee saw blown leads again, both after halftime. Of course, embattled offensive coordinator Bryan McClendon is likely not returning to the staff next season because of the ongoing struggles on offense.