Texas A&M’s senior class was instrumental in the team’s outstanding 2020 season, which ended with a 9-1 overall record after beating North Carolina 41-27 in the Orange Bowl, and now those veteran players are reaping the rewards of the success they shared on the field this season.

The latest senior to take advantage of his success and springboard into an NFL career is linebacker Buddy Johnson, who announced his decision to turn pro on Friday.

Normally these announcements wouldn’t be necessary, but the NCAA has allowed seniors to return next season, leaving some of these decisions up in the air around the SEC. For Johnson, the opportunity at the NFL was too much to pass up.

“I hope I was a great teammate to my brother and a great presentation of this program,” Johnson wrote in his farewell to Texas A&M. “I will forever bleed maroon and white, and I can’t wait to see the program progress even further. Never forget, the storm is coming!”

The Aggie linebacker leaves College Station after racking up 209 tackles, 23.5 tackles for loss, 5.5 sacks, an interception and three forced fumbles during his career. 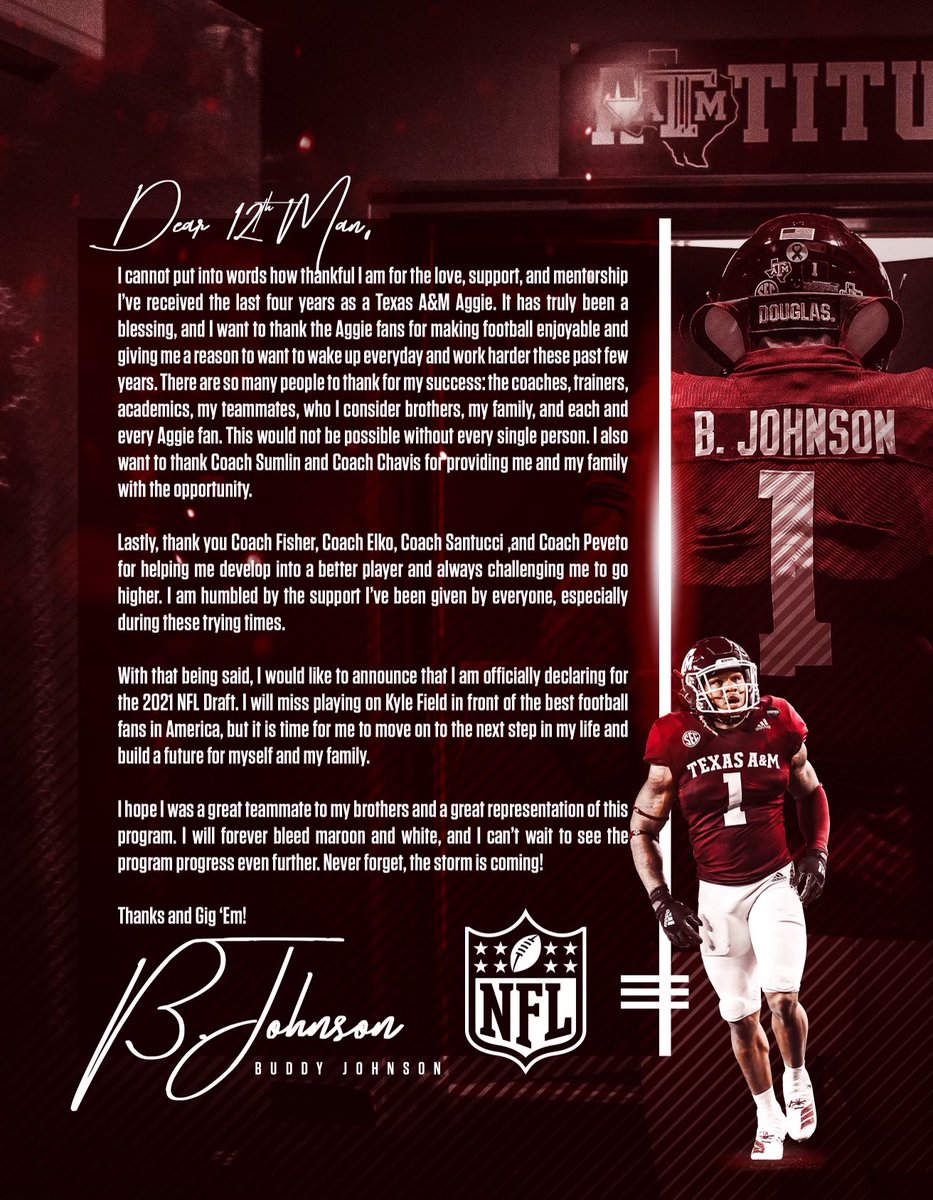 TRENDING
17,684 READS
Naming names: Why Tennessee must choose among these 3 candidates for its next head coach
15,318 READS
If he's eligible for Kentucky, Wan'Dale Robinson will be the sport's most impactful non-QB transfer in 2021
12,468 READS
To'o To'o and Gray are leaving, too? Whatever your expectations are for 2021 Tennessee, lower them
LATEST NEWS
View All
5 hours ago
Mike Krzyzewski bristles at question from student reporter following loss to Louisville
6 hours ago
Rick Pitino candidly shares his biggest regrets during his coaching career
7 hours ago
Report: Former SEC player, assistant targeted by Nick Saban to be Alabama's RB coach
8 hours ago
Ed Orgeron to reportedly interview NFL assistant with Louisiana history for DC position
8 hours ago
Matthew Stafford, Detroit Lions reportedly make decision on QB's future
8 hours ago
Miami Dolphins hire new QB coach who has a history coaching Tua Tagovailoa
VIEW MORE