It was one of the most impressive team efforts of the season. Texas A&M’s 30-6 victory over South Carolina on Saturday at Kyle Field checked all the boxes in all phases.

Are we to be impressed with a dominant showing that suggests a continued development of a program still in its infancy under head coach Jimbo Fisher? Or is South Carolina declining to the point that it makes even the most pedestrian of talent look like world beaters? The Gamecocks have lost four of their past five games and appear headed in the opposite direction.

Jalen Wydermyer, at least early on, played a key role in spreading out South Carolina’s defense and opening up the running game by catching passes both short and long. His 5 catches tied for the team high, and his 79 receiving yards led the Aggies. 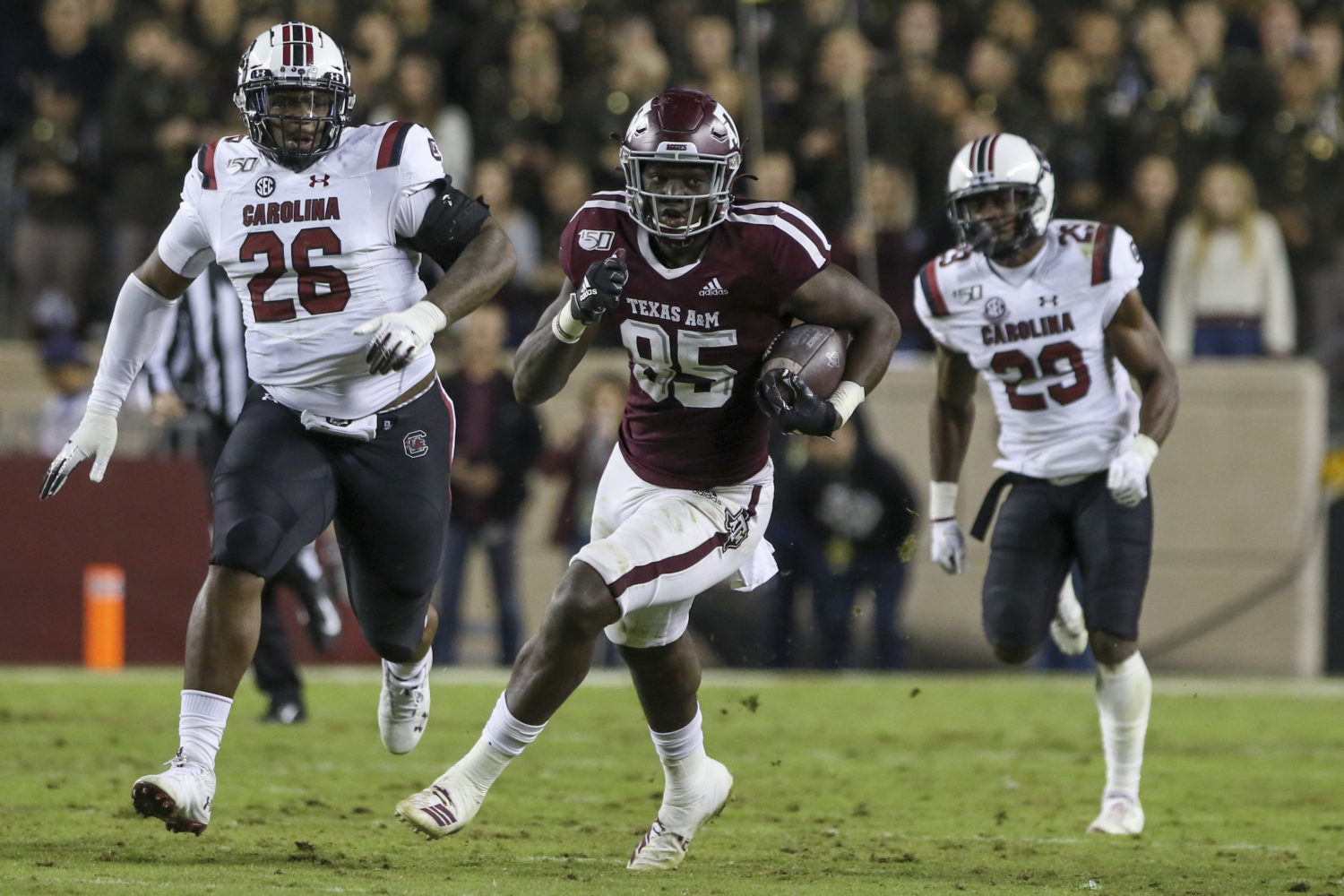 Freshman Isaiah Spiller ran with authority and purpose and continued to weave his way into the fabric of the Aggies’ offense. His 24 carries showed a level of durability that is rarely seen in a freshman. Averaging 5.4 yards per carry on his way to a 129-yard effort, Spiller showed the maturity of a seasoned running back, allowing blocks to develop and, when called for, probing the line for a crease.

Wow. The Aggies formed a brick wall that South Carolina had no success in penetrating. Anthony Hines III and Buddy Johnson led the way with a team-high six tackles apiece. Hines recorded a pair of tackles for loss, and the Aggies stuffed the Gamecocks’ running game, yielding just 45 yards on the ground. That’s the fewest the Aggies have given up on the ground in an SEC game since they allowed 19 to Auburn last November.

South Carolina moved the ball a bit in the early going. One first-quarter drive went 63 yards in 7 plays before the Gamecocks missed a field goal. But in seven second-half possessions, the Gamecocks put together just one drive in which they possessed the ball for more than 1:50. Three of those drives ended in a three-and-out, helping give the Aggies a lopsided advantage in time of possession. Texas A&M held the ball for 41:39, while South Carolina had it for 18:21.

He’s not flashy, and at times he still looks a bit awkward, but Kellen Mond managed the game and put the Aggies in position to win it. He was efficient overall, completing 20 of 33 attempts (221 yards, 1 TD), although he did miss some open receivers. Still, Mond did not turn the ball over, either through the air or on the ground, and even added 57 rushing yards and a touchdown. 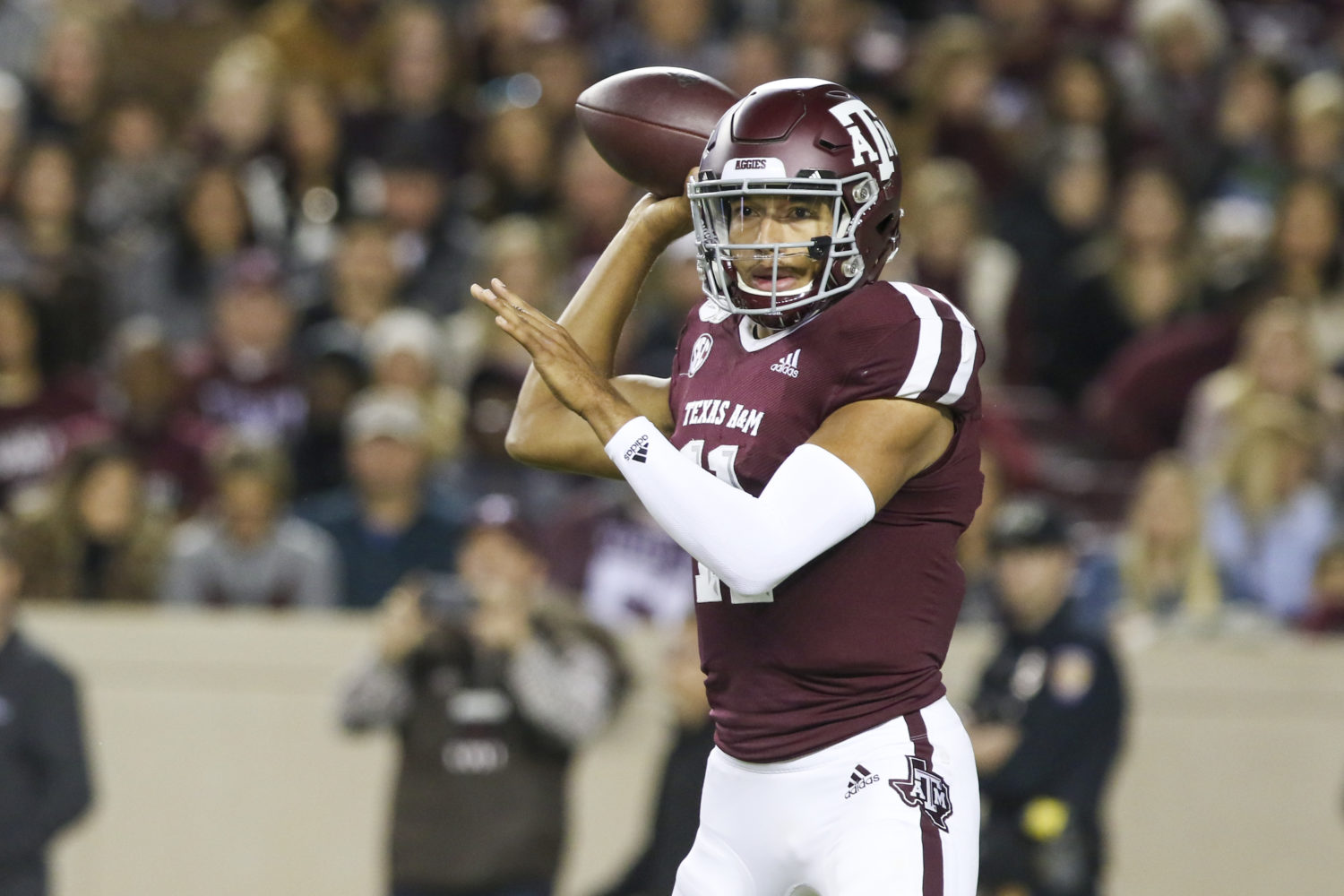 Kellen Mond was an efficient 20-of-33 and protected the ball. Photo by: John Glaser-USA TODAY Sports

South Carolina moved the football through the air in the early going. It looked like another long night for the Aggies’ secondary, with South Carolina QB Ryan Hilinski completing 5 of his first 7 passes for 90 yards. Until the Aggies adjusted, Hilinski had his way, completing passes that resulted in four consecutive first downs.

Though he made up for it with some outstanding returns later, Smith’s decision to catch a South Carolina punt at his own 4-yard line could have backfired. He pinned his team deep in its own territory, which could have set the Aggies on a different path in the game. But he went on to average 13.3 yards on four punt returns, including a 29-yarder.

3. Targeting calls getting out of hand

Twice within a few plays of the fourth quarter, the Aggies were flagged for targeting. Though both calls were rightfully overturned, still, play was stopped for several minutes each time to review the tackles and determine whether forcible contact had been made to the head or neck area. It seems that every time a hard tackle is made, the game comes to a halt to review it for flagrancy. Stop it. It’s tackle football, not flag football.