The Aggies put up a fight for about a quarter-and-a-half, and then a supremely confident Clemson team took over and posted a 24-3 victory on Saturday.

The quarterback battle between Clemson’s Trevor Lawrence and Texas A&M’s Kellen Mond proved to be the difference. While Lawrence remained cool in the pocket, using his legs to extend plays when needed, Mond was generally not sharp. And when he was, he got little help from his receivers.

Still, there were some positive takeaways. Here are five things I liked about the game, and three things I didn’t like.

The Aggies took chances early, throwing the ball downfield on the first series of the game. They had a potential big play in their first series that might have given the team some momentum, but Mond overthrew a wide-open Camron Buckley. It pretty much typified what would come.

Head coach Jimbo Fisher went for it on fourth and 1 from the Clemson 43 in a scoreless tie late in the first quarter. The Aggies converted and went on to kick a field goal for a 3-0 lead.

The Aggies held their own in the battle in the trenches offensively, at least early on, and that allowed them to control the football — a trait that has become apparent in the Jimbo Fisher era.

But as the deficit grew, the Aggies were forced more and more to abandon a balanced attack and go more to the passing game. And that played into the hands of the Clemson defense, as it was able to pressure Mond and throw him off his game. 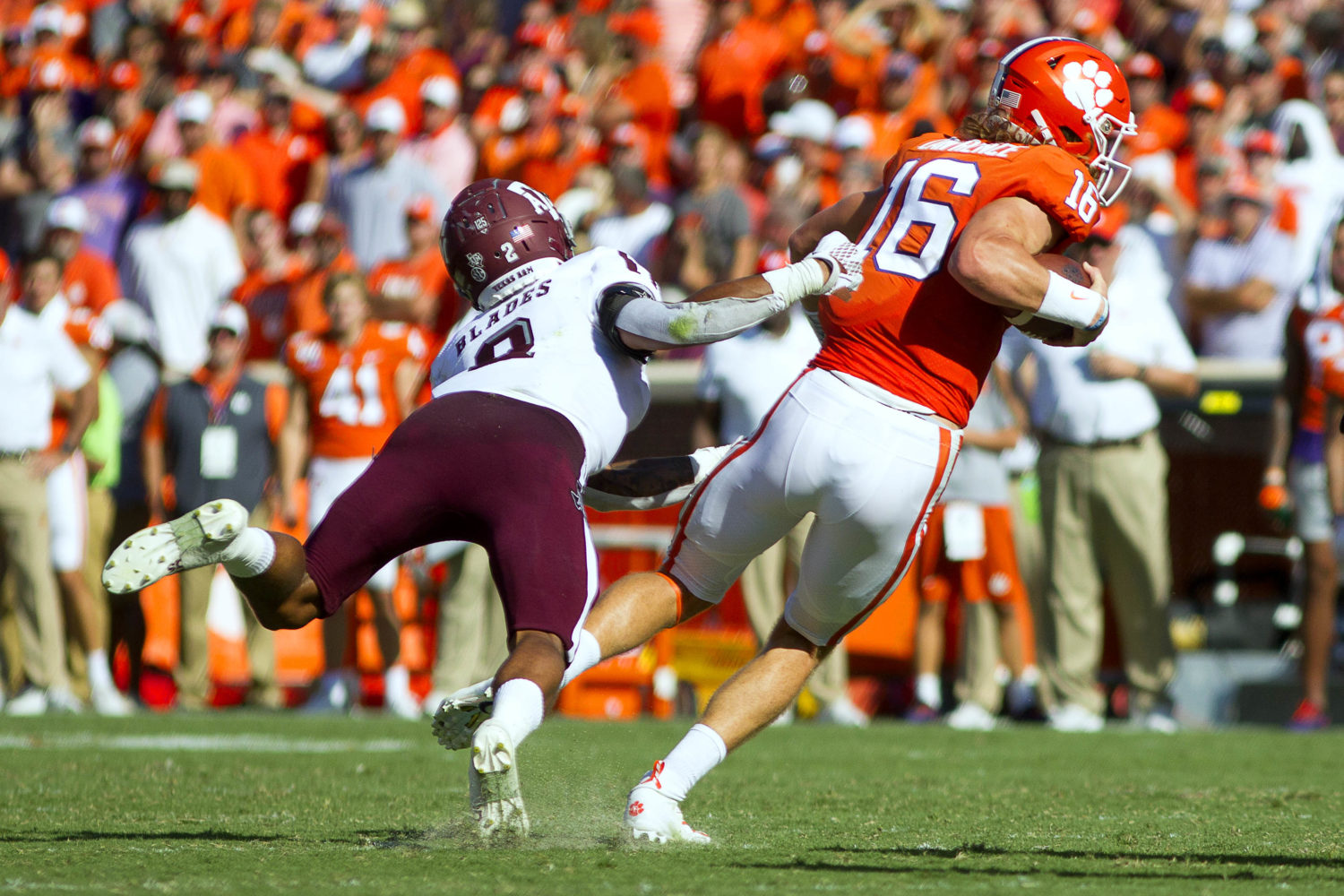 Unfortunately for the Aggies, Lawrence is a master at converting Plan B opportunities.

Like the game last year at Kyle Field, the Aggies rallied late and looked their best when Clemson’s defense was in prevent mode. But alas, when challenged, Mond and the Aggies wilted under the pressure.

But they didn’t quit. The Aggies fought to the end. However, you can’t fall behind a national championship-quality team by three touchdowns and expect to come out on top.

The Aggies receiver was targeted eight times and came up with seven receptions. He was the Aggies’ leading receiver with 69 yards. In a year when Texas A&M is searching for a go-to receiver, Ausbon could very well turn out to be that guy. Only time will tell, but Ausbon at least proved to be the Aggies’ best option on Saturday against the nation’s top-ranked team.

It can certainly be understood considering the magnitude of the game. Mond experienced nerves, missing his first four passes and going 0-fer on his first two drives. He failed to look at the play clock, forcing the Aggies to burn a timeout on another drive. He then drew a delay of game penalty following the kickoff after Clemson’s first score early in the second quarter, and on that same possession he fumbled the ball away, leading to a Clemson field goal.

While aggressive in nature, Clemson receivers gave the Aggies secondary a lesson in coverage. Too often, Tigers receivers worked their way open to become easy targets for big gains at crucial times.

3. Just too many mistakes

Whether it was self-inflicted false starts, delay of game penalties or receivers not helping a struggling quarterback, Texas A&M simply made far too many mistakes to make a legitimate run at the nation’s No. 1 team.

TRENDING
17,684 READS
Naming names: Why Tennessee must choose among these 3 candidates for its next head coach
15,318 READS
If he's eligible for Kentucky, Wan'Dale Robinson will be the sport's most impactful non-QB transfer in 2021
12,468 READS
To'o To'o and Gray are leaving, too? Whatever your expectations are for 2021 Tennessee, lower them
LATEST NEWS
View All
17 minutes ago
Shane Beamer addresses transitioning to the 'CEO' part of the job at South Carolina
41 minutes ago
Two assistants with SEC ties reportedly under consideration for openings at Alabama
1 hour ago
Pro Football of Fame recognizes Justin Jefferson's historic rookie season in new display
2 hours ago
Report: Tennessee AD has Clemson assistant 'high on list' of candidates for Volunteers head coach
3 hours ago
Conor McGregor or Jimmy Dykes? Social media reacts to bizarre ESPN2 segment during Auburn-South Carolina game
3 hours ago
Mississippi State lands Texas transfer DB, former 5-star recruit
VIEW MORE