Kirk Herbstreit early in the fourth quarter in the Kentucky-Tennessee game updated his top 4 teams in the College Football Playoff. That came ahead of Tuesday’s initial rankings reveal on ESPN.

Herbstreit speaking with Chris Fowler on the broadcast explained why he leapfrogged Tennessee over Ohio State.

“You have to look at who they’ve played,” Herbstreit said. “Teams that have been ranked gives them the edge. Slight change. They won at LSU, they beat Alabama in consecutive weeks, what they’re doing tonight against Kentucky, you have to recognize that.”

The Vols lead Ohio State, Georgia and Michigan with Alabama and Clemson on the outside looking in.

Tuesday’s rankings will be released at 7 p.m. ET on ESPN. 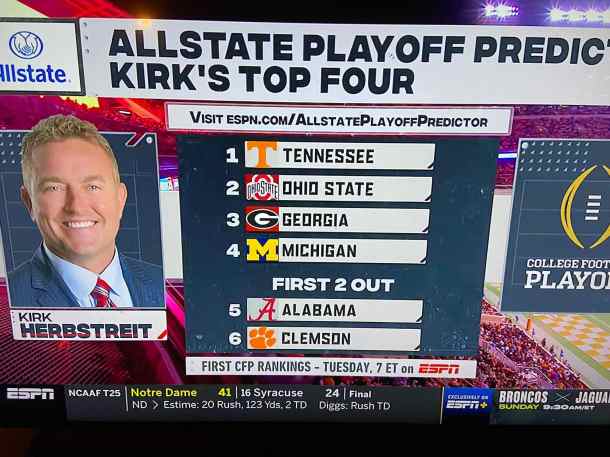 The selection committee will announce its first of 6 rankings on Tuesday. The committee members will convene
in person on Mondays and Tuesdays, and reveal their rankings each week on ESPN.

The final selection committee rankings of the 2022 season will be released on selection day, Sunday, December 4.

Tennessee sportsbooks are live in the Volunteer state since November 1, 2020. Tennessee was the first SEC state to legalize sports betting.

Keith Farner
A former newspaper veteran, Keith Farner is a news manager for Saturday Down South.