Some of the biggest shoes to fill in the SEC this season are at the game’s most important position in Knoxville.

Former Tennessee quarterback Joshua Dobbs is off to the NFL, and currently he’s rising up a lot of draft boards. A starter at some point all four years he was in a Volunteers uniform, he left very little experience behind him.

Coming into Saturday’s Orange & White Game at Neyland Stadium, it appeared to be a two-man battle between Quinten Dormady and Jarrett Guarantano. While Dormady is a rising junior — he saw action sparingly from 2015-16 — Guarantano redshirted last season and still has four years of eligibility at his disposal.

The Vols feature some unconventional scoring in their spring game to say the least (3 points for showing 5-star heart, allegedly), so the final tally is immaterial.

Nevertheless, Dormady put together a rather impressive box score. He was a perfect 10-of-10 passing for 120 yards with 2 touchdowns. Previous reports suggesting he was slightly ahead of Guarantano in the competition seem to be accurate.

Coming into spring ball, there was a narrative circling the program that Dormady was more of a pure pocket passer and Guarantano offered extra dual-threat abilities. Nevertheless, Dormady looked to move in and out of the pocket just fine, plus he showed nice touch on the football and knew when to dial down the RPMs a bit.

It’s worth mentioning that both wore non-contact jerseys and weren’t pressured much, plus lightning forced the cancellation of the second half.

But even in a glorified scrimmage that abruptly ended early, it was evident that there wasn’t much difference physically between the two. While Guarantano (below) was 4-of-5 through the air for 41 yards, he didn’t run things as smoothly as Dormady did. 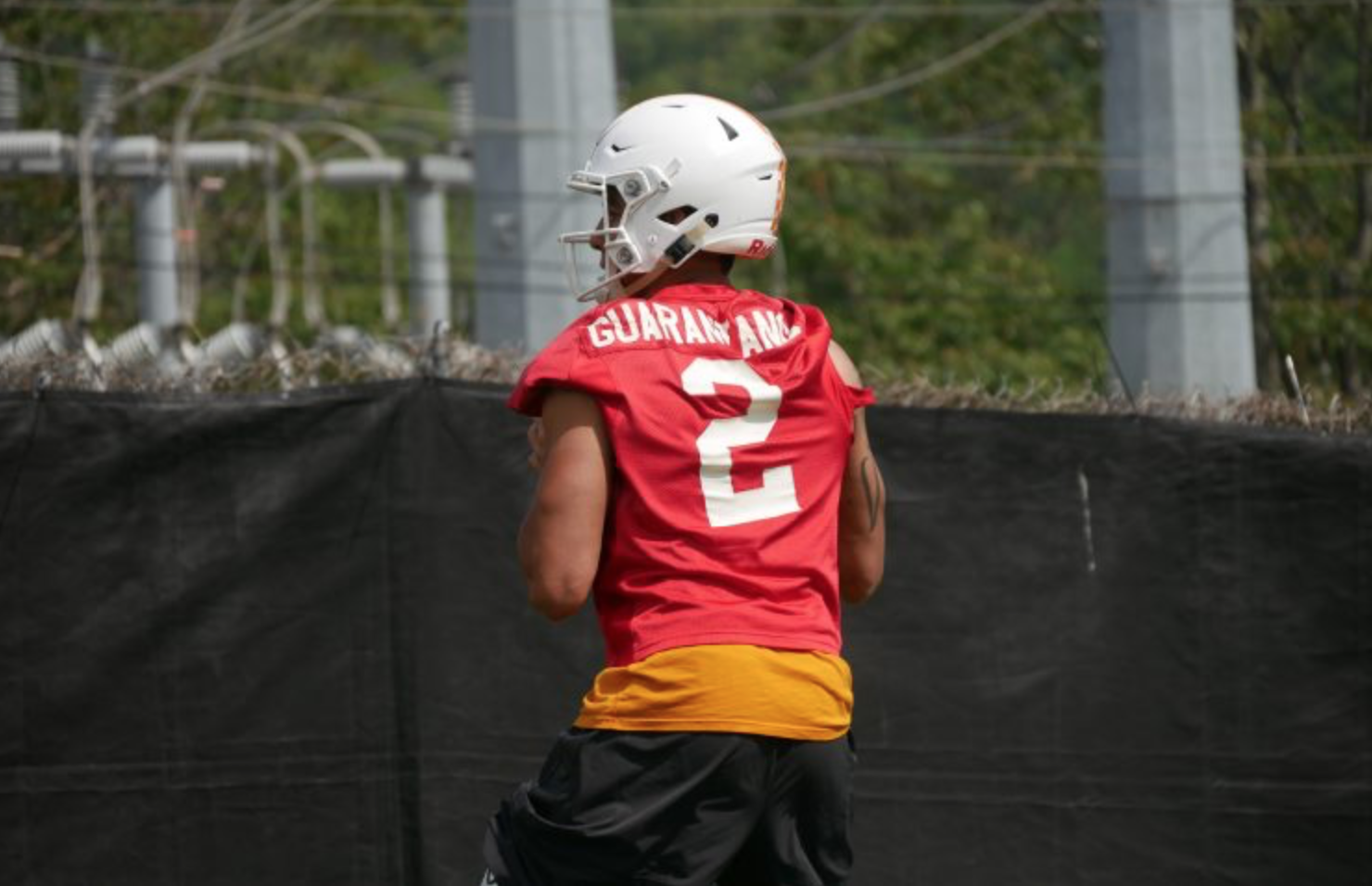 Unfortunately for whomever ends up winning the job, he won’t have nearly the same talent around him that Dobbs did a year ago. Gone are Jalen Hurd and Alvin Kamara at running back, as are Josh Malone at receiver and Jason Croom at tight end. UT had eight players catch double-digit passes last season, and that’s half of them.

There have been serious defections on D, as well. End Derek Barnett, linebacker Jalen Reeves-Maybin and cornerback Cameron Sutton are history.

Fifth-year coach Butch Jones is in no hurry to name a starter for the 2017 campaign, although it’s safe to project Dormady as the No. 1 when the Vols kick off against Georgia Tech on Sept. 4 at brand-new Mercedez-Benz Stadium in Atlanta.

Remember, back in 2014, Jones went with the older Justin Worley over the younger Dobbs, even though it was Dobbs who finished the previous season atop the depth chart. Eventually, Worley played poorly enough to lose his spot once and for all. Dobbs took the reigns again, never gave them back and helped resurrect Rocky Top.

One way or another, his top two candidates to replace Dobbs went a combined 14-of-15 in the spring game. Jones has to feel pretty good about that.

“They have made tremendous progress,” he told reporters after the game. “All spring we’ve talked about don’t compare. Compete. They competed all spring. I thought that was evident today.”

Hopefully, Jones doesn’t waste half a season this time if Dormady disappoints. He already made that mistake three years ago with Worley.