TAMPA — Even if he did so in a loss, Clemson quarterback Deshaun Watson has had success against the Alabama defense before.

In last year’s College Football Playoff National Championship Game, a 45-40 defeat, he completed 30-of-47 passes for 405 yards with 4 touchdowns and 1 interception, plus he sprinkled in 73 yards on the ground as a rusher.

He spread the ball around beautifully, as six different Tigers — including tailback Wayne Gallman — caught at least three passes. Despite Watson’s monstrous yardage total through the air, no pass catcher topped triple digits. With no primary target, the Heisman Trophy finalist was all cliché and took what the defense gave him.

But now Watson has a definitive No. 1 option at his disposal. Receiver Mike Williams is the matchup nightmare every QB needs.

At 6-foot-3 and 225 pounds, Williams is the Alpha dog of the Clemson receiving corps with 90 grabs for 1,267 yards and 10 touchdowns. Due to a neck injury suffered in Week 1 of the 2015 campaign, he wasn’t available for last season’s title game.

Wideouts Hunter Renfrow, Ray-Ray McCloud and Artavis Scott all made plays against the Crimson Tide a year ago, as did tight end Jordan Leggett, but none of them presents the kind of problems that Williams does. This spring — assuming he declares early — he should be the first receiver selected in the NFL Draft.

‘Bama may be talented in the secondary, but Williams will test its cornerbacks and safeties Monday in a CFP rematch for all the marbles.

“He’s a really, really good player,” Tide coach Nick Saban said Saturday. “Very athletic guy for his size. They use him extremely well systematically in their offense. They have other significant challenges, as well, and because of the way they use him, his physical size and athleticism, he does create some challenges for you.” 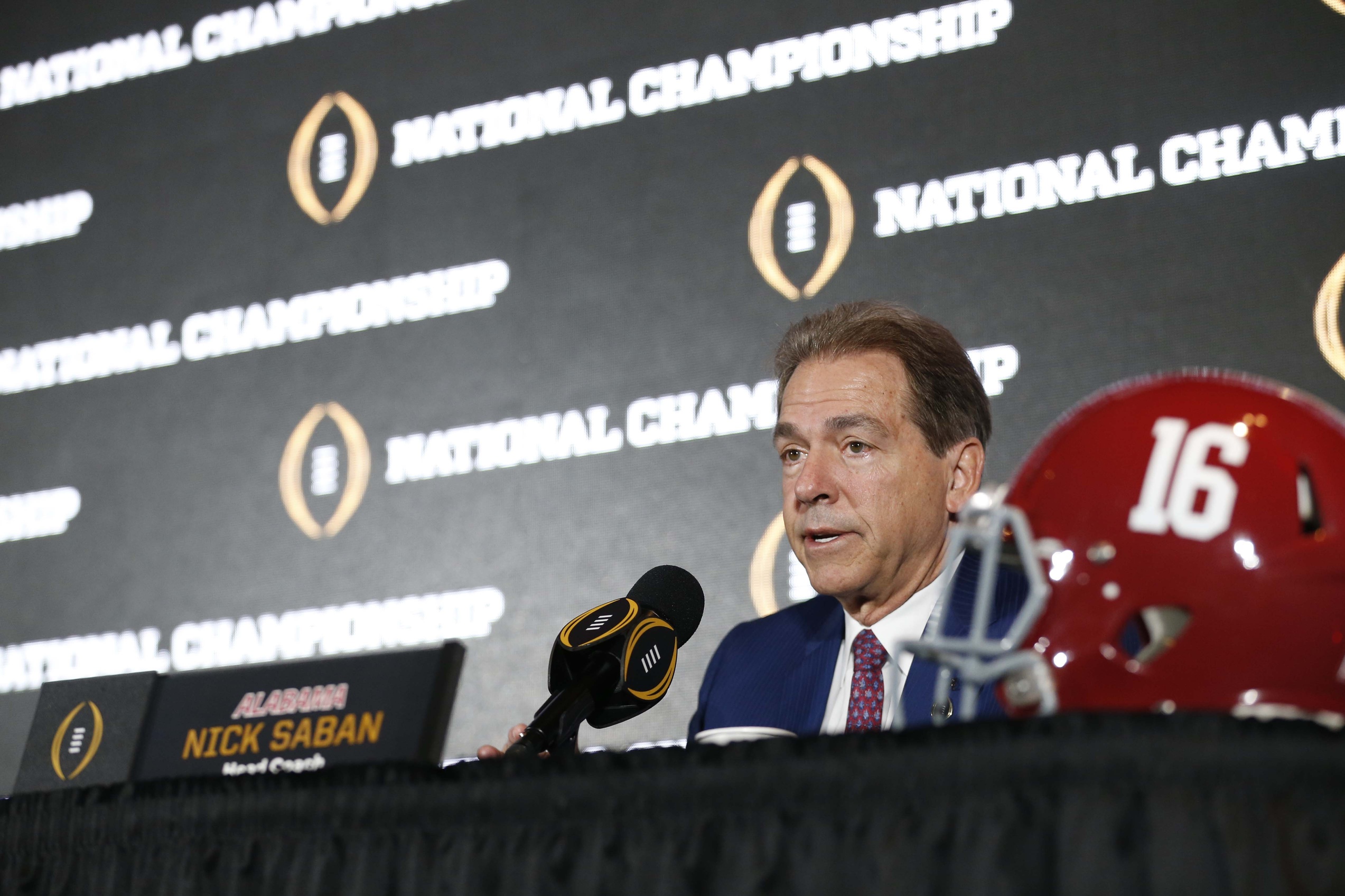 With All-SEC safety Eddie Jackson breaking a leg Oct. 22 in the Texas A&M game, Alabama was forced to reshuffle its defensive backfield to some degree. His absence will be felt when Saban (above) has to put extra DBs on the field.

“You almost have to play nickel all the time against these guys,” he said, “so you’re going to end up with a smaller guy covering the guy a lot.”

Because the Tigers run a spread-style offense with a lot of four-receiver sets — Leggett is quite versatile with his 6-foot-5, 260-pound frame — nickel and dime coverage becomes the norm. More defensive backs means fewer linebackers, which can help Clemson on the ground since Williams is a mass of humanity.

“A lot of their perimeter runs and RPOs are actually plays where he becomes a little bit of a physical mismatch sometimes as a blocker,” Saban said.

The closest Crimson Tide defensive back to Williams physically is safety Ronnie Harrison (6-3, 216), although he can’t run with him.

“He’s a big guy, fast guy,” defensive coordinator Jeremy Pruitt said. “He really competes for the 50/50 balls. He goes and gets it. Looks like a power forward out there playing, so got really good competitive spirit about him.”

Even if he is the primary focus for Pruitt and Co. from a game-planning perspective, Watson has already proven that he can carve ‘Bama up without him. Rolling coverage Williams’ direction only creates openings elsewhere.

“They have got several really good football players out there,” Pruitt (below) said. “It’s not just one: Mike Williams, Deon Cain, Scott, Ray-Ray. They have got some difference makers out there, and then you have Leggett at tight end. So they have got plenty of playmakers, and then they have guys in the backfield that can do things with the ball in their hands. So unique guys out there.” 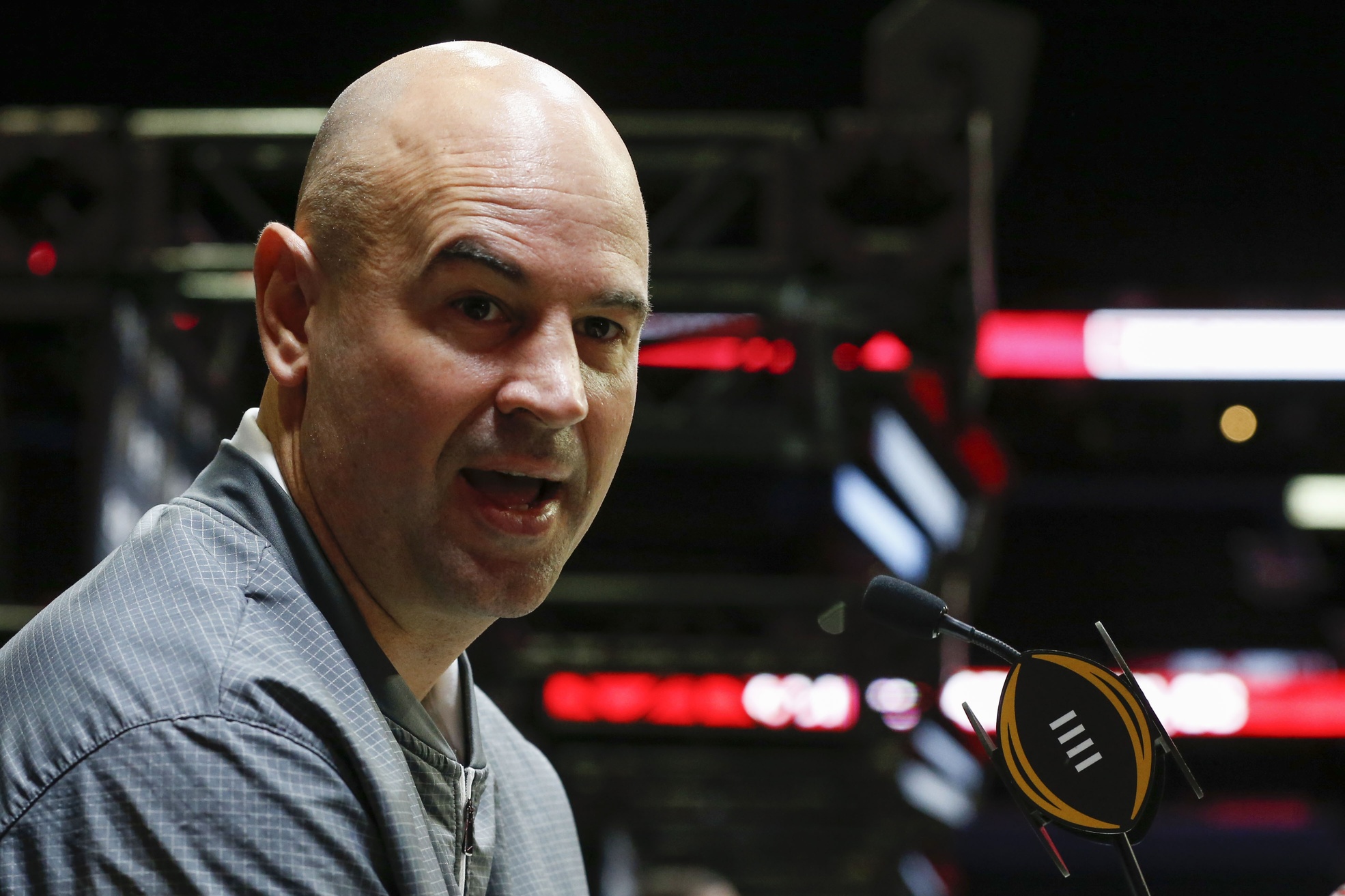 More than likely, Gallman is in for some rough sledding in the running game. For the fourth time in the last six years — among 128 teams at the FBS level, remember — the Tide feature the No. 1 rush defense in America. Last January, he was more productive for Clemson as a pass catcher (61 yards) than a rusher (45).

As a result, Watson probably has to throw for 400-plus again if he wants to pull the upset. Other signal callers have managed to do it.

In Week 3, Chad Kelly of Ole Miss racked up 421 yards. In Week 6, Austin Allen of Arkansas went for an even 400. While a lot of that yardage came in garbage time late in losses, Alabama did give up a fair amount of big plays vertically.

There have been 37 1,000-yard receivers nationally in 2016, yet the Crimson Tide have gone up against just four of them. Two — Western Kentucky’s Taywan Taylor and Nicholas Norris — did so in a high-volume passing attack in a Group of 5 conference. The third, Texas A&M’s Josh Reynolds, only caught two passes vs. ‘Bama. The fourth, Washington’s John Ross, caught five balls for 28 yards in the Peach Bowl.

Reynolds and Ross are future pros, no question about it. Neither is Williams, though. The Tide are yet to face anything like him this season.

The Tigers are making a case lately as the new Receiver U. Their two most prolific pass catchers in program history, Sammy Watkins and DeAndre Hopkins, were first-round picks and quickly became stars on Sunday.

Williams is as dangerous as either of those two ever were — perhaps even more so. Of course, he’s doubly dangerous with Watson as his trigger man. Neither Watkins nor Hopkins had that luxury. As you’d expect, Clemson is first in the ACC with 67 passing plays of 20-plus yards. Alabama is only ninth in the SEC with 41 allowed.

The Crimson Tide managed to survive a war with Watson a year ago. But this time, he has one more weapon at his disposal.