Nick Saban should've relieved Lane Kiffin of his duties weeks ago, not now

Frankly, I’m a bit surprised that Lane Kiffin’s divorce from Nick Saban didn’t happen earlier than it did.

When Kiffin was announced as the new head coach at FAU, I figured he’d close up shop in Tuscaloosa immediately. Free from Saban once and for all, he could do as he pleased in Boca Raton and not have to worry about any more “ass chewings.”

But Kiffin agreed to stick with Alabama through the College Football Playoff. While the Crimson Tide overpowered Washington 24-7 in the Peach Bowl — one of the two national semifinals — it certainly wasn’t due to Kiffin’s offense. Quarterback Jalen Hurts managed a grand total of 57 yards through the air in a sloppy outing.

Now halfway through the playoff, Kiffin has been relieved of his duties. This was a firing, make no mistake about it.

“We made the decision because it was in the best interest of our players, our program and for Lane for him to assume his duties at Florida Atlantic,” Saban told ESPN on Monday. “We mutually agreed that this was best for both programs.”

Saban is saying all the right things, of course. He’s more CEO than head coach at this point, so he won’t let any Kiffin drama steer ‘Bama off course. However, imagine how clenched his teeth must’ve been when talking to the Worldwide Leader.

Despite the fact that Bo Scarbrough was a man possessed against the Huskies, Kiffin simply couldn’t help himself and kept passing to set up the run instead of the other way around. Hurts, still just a true freshman, was inefficient — both throwing and running, as a matter of fact — and not much of a factor.

Steve Sarkisian, who wasn’t supposed to call plays until next fall, will coordinate Saban’s offense against Clemson in the title game.

“After going through these last couple of weeks, trying to serve the best interests of two universities as an offensive coordinator and a head coach, it became apparent that both programs would be better served by me giving all my time and efforts to being the head coach at FAU,” Kiffin said in a statement. “After meeting with Coach Saban during preparations (Sunday) night and (Monday) morning, we mutually decided that it was in everyone’s best interests for the players and the program for Coach Sarkisian to take over all responsibilities as offensive coordinator for the championship game.

“This was a very difficult decision, but it’s a decision made in the best interests of the program. I look forward to helping Alabama win another championship, and would like to thank Coach Saban, the staff, and all the players and fans for the past three years at UA for an unforgettable time and championship run. Roll Tide!” 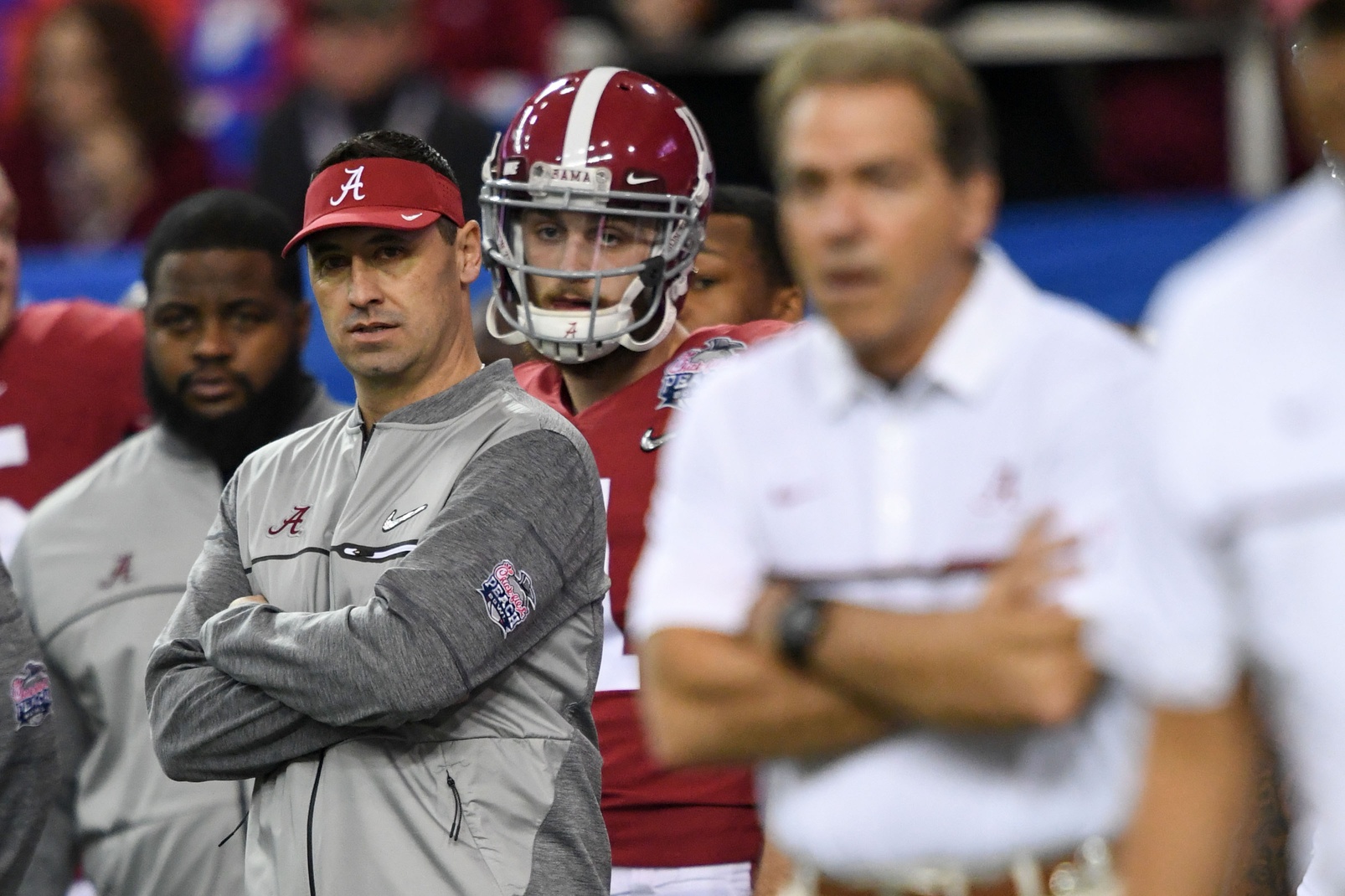 There were four weeks between the SEC title game and the Peach Bowl. That seemingly would’ve been plenty of time to move Kiffin out and Sarkisian (above) in — he’d been serving as an “offensive analyst,” whatever that is — for the playoff.

Instead, Sarkisian has a grand total of seven days to prepare for a Tigers defense that just shut out Ohio State in the Fiesta Bowl. Presumably, the last time he was this heavily involved prior to game day, he was drinking himself out of a job at USC midway through the 2015 campaign. Reportedly, he was even drunk for a game once.

This can’t be part of what Saban typically refers to as The Process. This is a Sandy Koufax-like curveball before the biggest game of the year.

“This wasn’t an easy decision, and we appreciate the way Lane handled this in terms of doing what is best for our team,” Saban said in a statement. “At the end of the day, both of us wanted to put our players in the best position to be successful. Obviously, we are in a unique situation here where we have our next offensive coordinator already on staff. We have full confidence that Sark will step in right away and make this a smooth transition.”

Apparently, the “best position to be successful” for Alabama is with Kiffin relegated to the depths of Conference USA. To paraphrase Thornton Melon from “Back to School,” Saban’s an earth sign. Kiffin’s a water sign. Together, they make mud.

What kind of an effect this will have on the Crimson Tide’s chances to win a fifth ring in eight seasons is anyone’s guess. While it’s the players actually making the plays, Kiffin has been the wizard behind the offensive curtain for three years — with three quarterbacks, too. He’s exceptional at what he does.

Sarkisian hasn’t served in a pure offensive-coordinator capacity since 2008 at Southern Cal, which was his second of three stops with the Trojans.

That season, the Men of Troy were second in the Pac-10 — the league was yet to expand to 12 teams — in total yards. Still, in five years as the head coach at Washington and one-plus at USC, only once did he have a Top 5 offense in the conference.

It’s certainly possible that Sarkisian calling plays will yield results no different than if Kiffin had stuck around for another week. Remember, ‘Bama is suffocating defensively. Unlike last season’s final, when Clemson’s Deshaun Watson went bananas, Hurts and Co. probably won’t have to score 45 points to win.

Nevertheless, if the Tide lose their rematch with the Tigers due to a poor offensive showing, this decision will be parsed all offseason long.

RECENT ARTICLES
ALABAMA
Najee Harris is working out with legendary NFL RB ahead of 2021 draft
ALABAMA
Mac Jones the next Tom Brady? Joe Namath seems some comparisons between the two QBs
ALABAMA
Alabama players show off their 2020 championship rings
ALABAMA
Alabama OL Alex Leatherwood hilariously explains why he doesn't like cats: 'Those are demons'