We've heard all about 'The Process' at Alabama, but what does it mean?

TAMPA — “The Process.” If you’ve seen more than a quarter of Alabama football during the Nick Saban regime, then you’re familiar with the term.

At some point during every press conference, Saban refers to The Process. Trusting it. Believing in it. To those inside the program, it’s what separates the Crimson Tide from the other 127 schools at the FBS level.

But what exactly is The Process? Is there a dictionary definition — it’s still yet to earn its own entry at Merriam-Webster, although a fifth national title in eight years Monday might change that — better explaining it to the uninitiated? Does it mean different things to different people? It sounds like some Tony Robbins seminar jargon.

Media Day for the College Football National Championship Game on Saturday provided me with a prime opportunity to get to the bottom of The Process.

The setting at Amalie Arena gave me a chance to talk to as many ‘Bama athletes as possible in the one hour allotted for credentialed members of the media like myself. Access is much more restricted back in Tuscaloosa.

A minor-league version of what you might see at the Super Bowl — and less of a circus atmosphere, thankfully — a couple of premier players like quarterback Jalen Hurts and linebacker Reuben Foster had booths to themselves. The rest gathered at tables. Some embraced the moment and hammed it up. Others stared at their phones in silence.

Safety Ronnie Harrison (below) has a relatively vague description of The Process, even if there’s clearly a lot of soup-to-nuts effort involved. 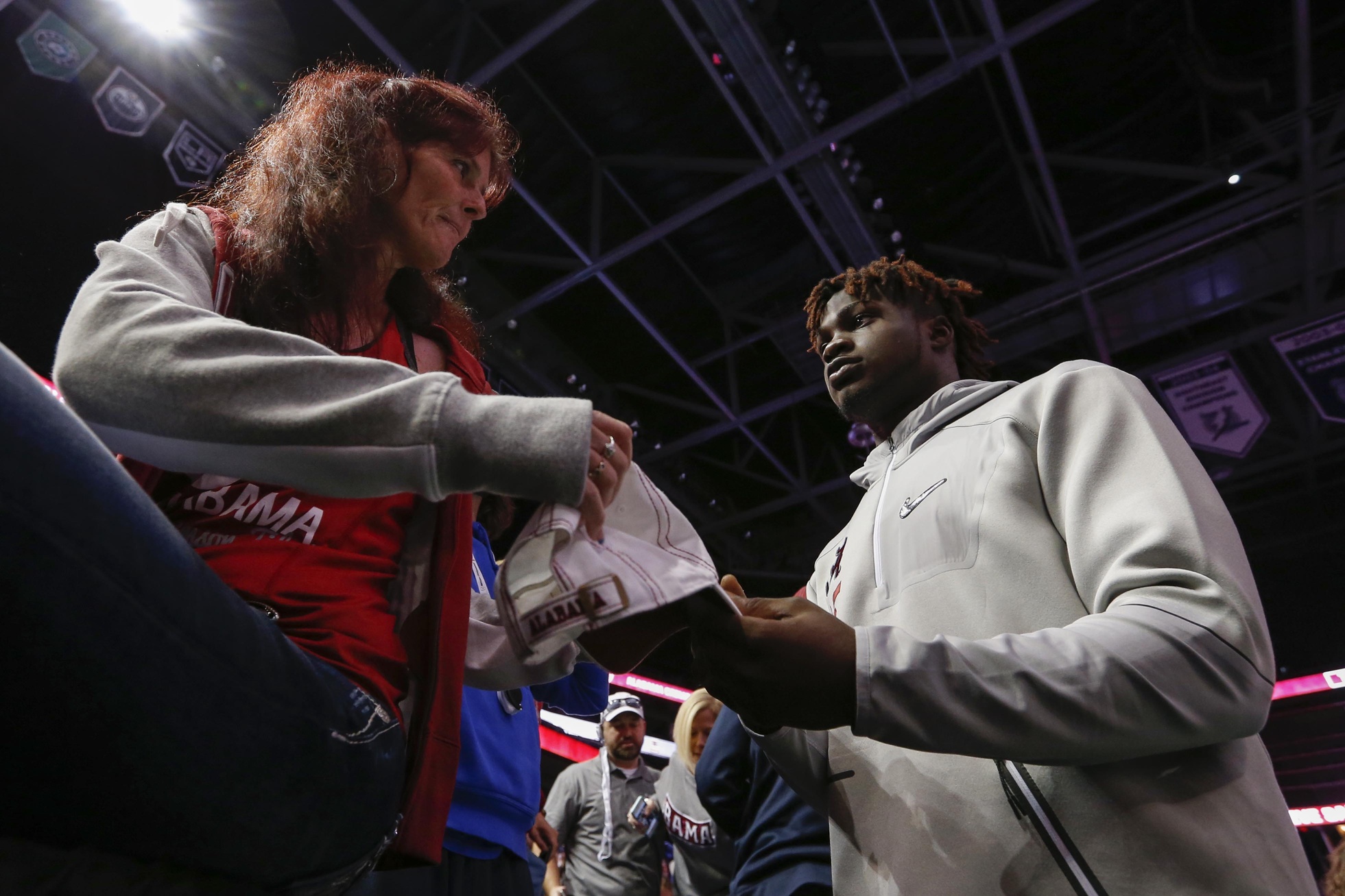 Others, like receiver ArDarius Stewart, have a cut-and-dry interpretation of The Process. And if you can’t handle it, that’s your problem.

“The Process is blood, sweat and tears,” he said. “That’s all I can tell you. We go out there and work hard. We try to be together. It’s a hard process. There’s nothing easy, and if you’re not ready to do it, you shouldn’t come.”

Keep in mind that most of the high school prospects Saban recruits are the best of the best, four-and five-star studs that are used to running circles around the lesser talented. The game simply comes easily to many of them.

But playing for the Tide isn’t like playing for, say, Louisiana Tech — no offense to any Bulldog fans out there, of course. Saban squeezes everything out of his players at the collegiate level, so much so that an increasing number of critics suggest there’s little room for them to improve once they graduate to the NFL.

Unquestionably, Saban demands a lot of his roster. Still, there’s no reason to question his methods given the results. The Process works.

“We try to buy into whatever he says,” center Bradley Bozeman said. “If we have to change a Tuesday practice up, then we just have to change it. It’s not really an option kind of thing. Either you do it, or you’re going to be replaced.”

A lot of kids probably think they got after it in high school. Nothing can truly prepare a freshman for the real deal, though.

“I think a lot of people come in thinking they know what to expect,” defensive tackle Dalvin Tomlinson said. “But pretty much the first day they run 110s in the summer, you buy in. Because if you don’t, you’re probably going to go out there and have a heart attack.”

Saban’s philosophy should be just about bulletproof by now. His résumé, four rings at Alabama and working on a fifth, speaks for itself. Any player putting on the crimson shocked by the amount of work required has to be stunningly naive. 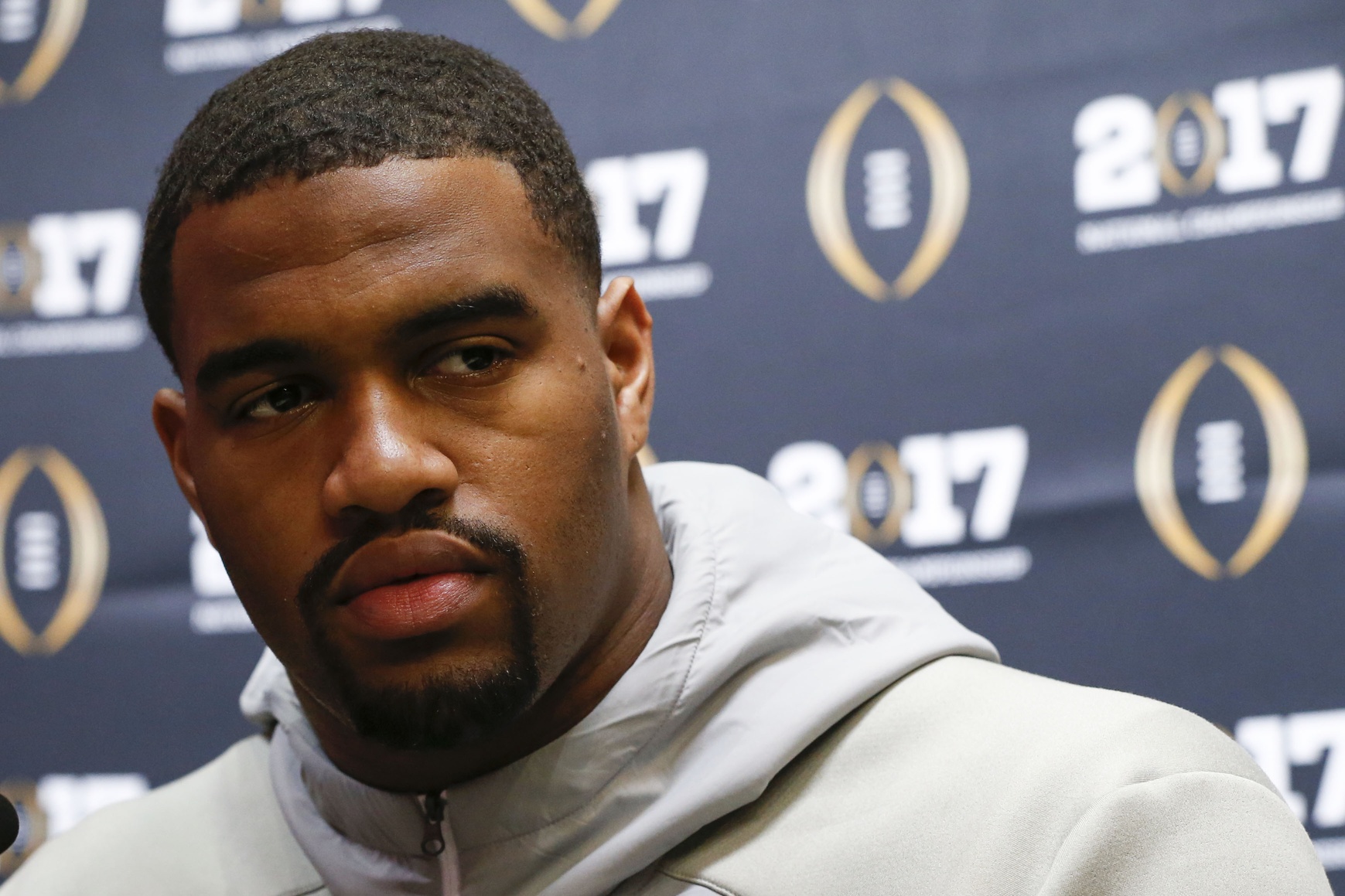 Perhaps most amazing is the players themselves constantly repeating Saban’s gospel — again, it’s all about The Process. Trusting it. Believing in it. Those who dedicate themselves to it go on to be All-Americans and first-round draft picks. Those who don’t are quickly cast aside to make room for the next wave of blue-chippers.

Tight end O.J. Howard, projected to be one of those first-rounders this spring, recognizes a black sheep like he recognizes man-to-man coverage.

“Easy, man,” he said. “He’s standing off by himself. He’s not playing because of that reason. You can just see it because of the way he’s acting. It really stands out.”

Defensive end Jonathan Allen (above), a consensus All-American, just might be The Process personified. Non-believers are a cinch to spot.

“You can kind of tell, especially if you’ve been in for more than a year,” he said. “So you can kind of understand when someone is not truly bought in or halfway bought in, and it’s just up to that person if they want to do it or not.”

Clemson, the Crimson Tide’s adversary at Raymond James Stadium, has a mantra of its own: “All In.” But if the Tigers upset ‘Bama in Tampa, it’ll be due to quarterback Deshaun Watson making plays, not some Twitter hashtag.

The Process, on the other hand, feels different. It seems almost tangible at this point. Physical, substantial, visible — yet still out of reach for the Tide’s opponents. It’s an all-encompassing maxim. From the meeting room to the film room to the weight room, there’s a way to do things. Then there’s the Alabama way.

For most of these Crimson Tide players, explaining The Process is tougher than living it. Knowing Saban, that’s probably by design, too.