This week’s Vanderbilt-Auburn game is one of four SEC matchups involving a Top 25 team. The Tigers, who beat Ole Miss, 40-29, in Oxford last week, will try to run their winning streak to six while the Commodores, who are coming off a bye, will attempt to win their third straight game.

Here’s a look at how the teams match up Saturday at Jordan-Hare Stadium (Noon ET, ESPN):

WHEN VANDERBILT HAS THE BALL

QB Kyle Shurmur vs. Auburn pass defense: Shurmur has completed 106 of his 200 passes (53 percent) for 1,089 yards, 4 touchdowns and 3 interceptions. With Shurmur leading the offense, the Commodores are last in the SEC in passing TDs (4) and passing yards per game (145.8). 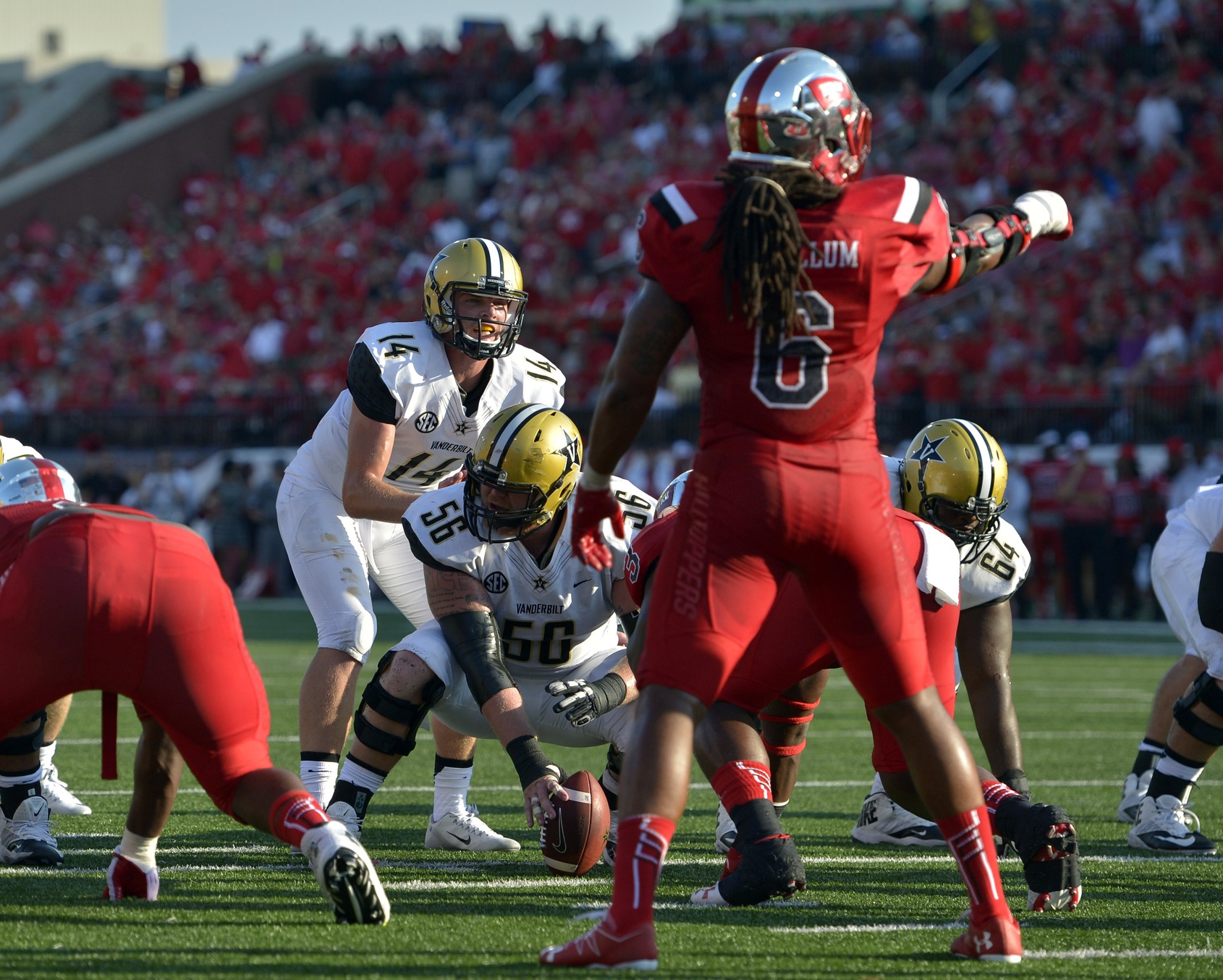 While Shurmur struggles in the passing game, he’s been no threat as a runner. The 6-foot-4, 223-pound sophomore has lost 36 yards on 31 rushing attempts.

Auburn, which allowed Chad Kelly to throw for an Ole Miss-record 465 yards last week, is yielding 231.6 passing yards per game to rank 10th in the SEC. Shurmur doesn’t throw many interceptions, and Auburn hasn’t forced many either. Having picked off five passes all season, the Tigers are tied with the Commodores for last in the SEC in that department.

Last week, the Tigers went up against the conference’s most dangerous passer and survived on the road. This week, they face arguably the SEC’s least imposing signal-caller at home.

RB Ralph Webb vs. Auburn run defense: A junior, Webb is averaging a career-high 5.2 yards per carry. He’s second in the SEC in rushing yards (855) and rushing yards per game (106.9).

On Sept. 10, Webb rushed for two scores and a career-high 211 yards on 29 carries in Vandy’s 47-24 victory over Middle Tennessee State. Webb has four 100-yard rushing games this season, including his 9-carry, 125-yard performance in the Commodores’ last contest, a 35-17 win against Tennessee State on Oct. 22.

Auburn has been better than average against the run, allowing 126.6 rushing yards per game to rank fifth in the SEC. After yielding 231 rushing yards in a 29-16 loss to Texas A&M and 220 in its 18-13 win over LSU, Auburn has allowed 345 yards on the ground – and just 2.7 yards per attempt – over its last four games.

Surprisingly, despite having Webb in its backfield and having one of the SEC’s worst passing attacks, Vanderbilt is only 11th in the conference in rushing yards per game (162.5). The Commodores are one-dimensional on offense, which plays right into the Tigers’ hands.

WR C.J. Duncan vs. Auburn pass defense: Duncan, a junior, has made a Vanderbilt-leading 21 catches, but no Commodore is averaging more than 31.6 receiving yards per game. Freshman Kalija Lipscomb leads Vandy in receiving yards (253) and TDs (2), and redshirt freshman tight end Jared Pinkney (13 receptions, 163 yards, 1 TD) has contributed as well.

The Tigers struggled against the pass last week, but Kelly has been a challenge for every team he’s faced this season. If Auburn shuts down Webb, Tigers cornerbacks Carlton Davis and Joshua Holsey along with safeties Tray Matthews and Nick Ruffin and nickelback Rudy Ford should be able to handle Vandy’s passing game.

WHEN AUBURN HAS THE BALL

QB Sean White vs. Vanderbilt pass defense: White remains the SEC’s most accurate passer, completing 68.5 percent of his attempts for 1,511 yards, 8 touchdowns and 2 interceptions. Those numbers have helped him continue to be the conference’s top-rated passer as well. 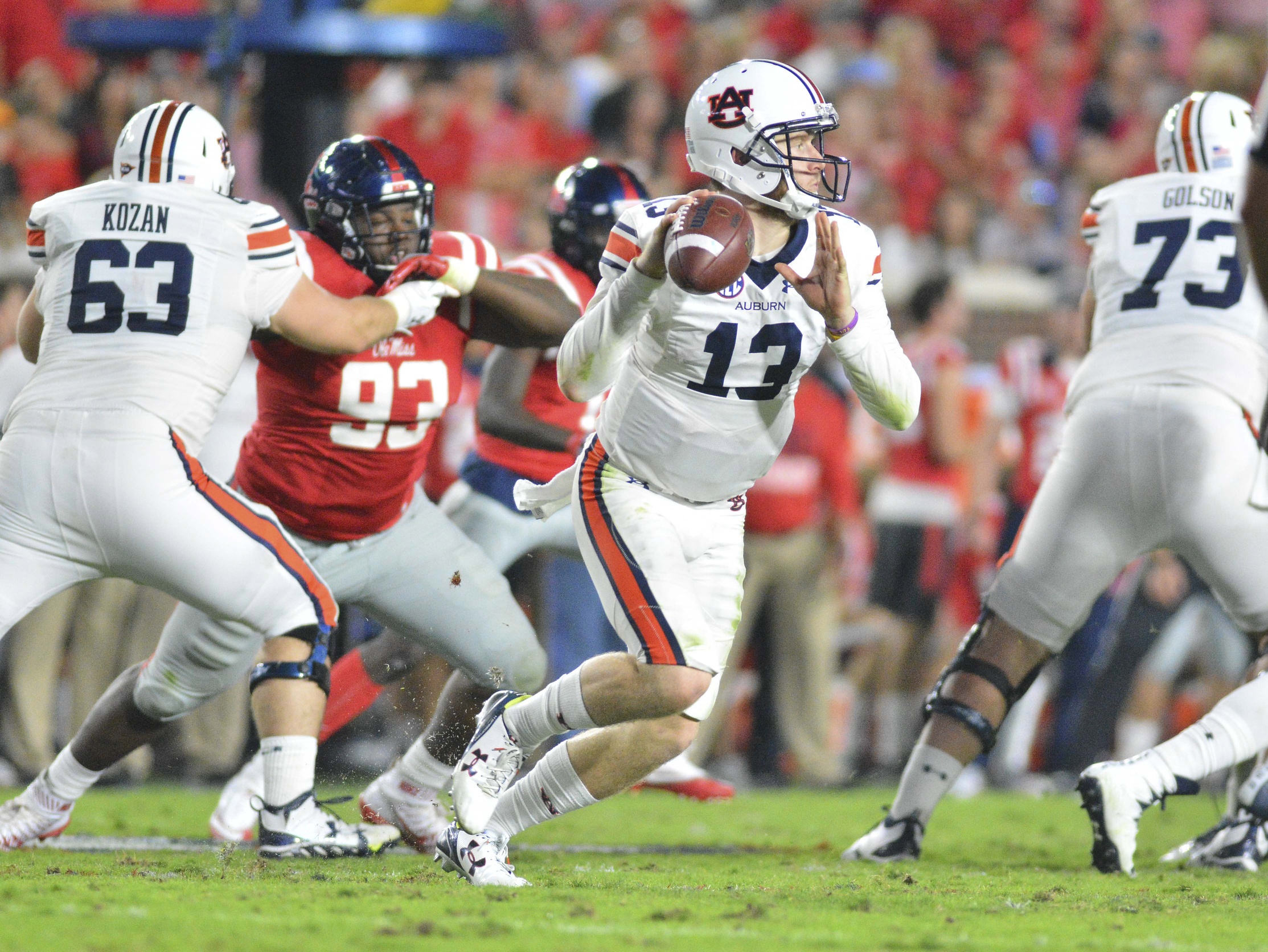 White has kept defenses honest by becoming more of a running threat. Over the last two games, the redshirt sophomore has rushed 9 times for 88 yards and a score.

The Commodores are 12th in the SEC against the pass, allowing 240.4 yards per game. Redshirt junior Ryan White (5 pass breakups, 2 forced fumbles) leads the Vanderbilt secondary with 54 tackles, and fellow safety LaDarius Wiley is right behind him with 51 stops.

White is going up against a struggling pass defense. The Tigers’ signal-caller should be licking his chops.

RB Kamryn Pettway vs. Vanderbilt run defense: Pettway is one of the biggest and best revelations in the SEC, leading the conference in rushing yards (933) and rushing yards per game (133.3). In each of the last three weeks, Pettway – who did not take a handoff last season – has set a career-high in rushing yards, capping that stretch with 236 against Ole Miss.

Pettway has been bolstered by the return of teammate Kerryon Johnson (580 yards, 8 rushing TDs) from an ankle injury. The sophomore rushed for 42 yards and 2 scores on 11 carries last week.

The Commodores are seventh in the SEC against the run, allowing nearly 158 yards per game. They have also surrendered nine rushing TDs and are yielding 4.6 yards per carry.

Georgia Tech, Western Kentucky and Kentucky have all rushed for more than 200 yards against Vanderbilt this year. Auburn is No. 1 in the SEC in rushing yards per game (303.4) and has also scored 24 TDs on the ground to top the conference.

WR Tony Stevens vs. Vanderbilt pass defense — Despite being part of an offense that passes only 30 percent of the time, Stevens – who is questionable for Saturday’s game — has been fairly productive. He ranks in the top 20 in the SEC in receiving yards and receiving yards per game (58.3).

Auburn has outscored its last two opponents 96-32 even without getting any statistical contributions from Stevens. The senior’s best game this season was a 4-catch, 109-yard, 1-TD performance in AU’s 58-7 win over Louisiana-Monroe on Oct. 1.

Even though Vanderbilt has been worse against the pass than versus the run this season, it would be surprising if White threw more than 20 passes on Saturday. Nevertheless, if Stevens doesn’t play, White has more than capable targets in any of the three Davises and other teammates.

White shouldn’t have to throw for 200 yards against the Commodores. Auburn is more likely to run for more than 300.

Once again, Daniel Carlson showed why he’s the best placekicker in the SEC and arguably the best in the FBS with his performance last week. He made all four of his field goal attempts to improve his conference-leading percentage to 94.4.

Meanwhile, Vanderbilt’s Tommy Openshaw has succeeded on 8 of his 11 tries (72.7 percent).
The Commodores’ Sam Loy is sixth in the SEC with an average of 43.2 yards on 44 punts. Auburn’s Kevin Phillips is averaging 40.6 yards on 20 fewer punts.

Auburn leads the league in punt return coverage, holding opponents to minus-3 yards on 2 returns. Vanderbilt is right behind the Tigers in that category, yielding 17 yards on 12 returns.

Vanderbilt’s Darrius Sims is second in the conference in kickoff return average (32.1). The Commodores have allowed 19.7 yards per kickoff return to rank third in the SEC. Ole Miss (22 yards per return) is ninth in the same category.