Where Rainbows Never Dye: Reflecting on the life of an SEC legend

The old coaches are dying.

One by one, they are leaving us for glory. Two years ago, it was Ole Miss’ Billy Brewer. This week, the college football world lowered its head and took a knee for an Auburn legend, Pat Dye.

Growing up in the South, I could not escape the sovereignty of college football. My television set was often filled with the faces of men like Bobby Bowden, Vince Dooley, Gene Stallings, Jimmy Johnson and Pat Dye. For a young, rawboned boy, these men were icons. Gods in a pantheon of sport.

Now they are slowly leaving us. Bobby Bowden is now 90 years old. Vince Dooley, 87. Gene Stallings, 85. And Patrick Fain Dye was 80 when he passed this Monday.

In my writing life, I have had the privilege of interviewing many of these men. What I have found is that there is a commonality among them. They are much the same person, only the insignia on their chest and the colors they wore were different. I found they were lovers of history. They sought various ways to connect with nature, the outdoors. For Dooley, it was gardening. For Stallings, it was cattle. For Dye, it was quail hunting and raising maple trees.

I discovered they were learners, storytellers, family men, and men of faith. They were like John Wayne of the gridiron. If they were born in another time, they might have charged up San Juan Hill or fought at the Alamo.

Instead, they were called to be football coaches.

Besides having a certain ruggedness, there was a softness about them, too. They were tough, but tender. They knew when to give a kick in the butt or a pat on the fanny.

Let me begin by saying that I am not an Auburn man. My allegiance has, and always will be, with the other team, halfway across the state. But for just a moment, strolling through the maple groves at his farm, known as Crooked Oaks, just 15.9 miles from Jordan-Hare Stadium, Coach Dye made me wonder if it was possible to like Auburn, too. In a rivalry so filled with hatred, was it conceivable for a fan’s heart to be 99 percent filled with crimson, and 1 percent orange?

What I took away most from my experience at Coach Dye’s farm was his generosity. We spent a large part of the day together — eating a humongous spread of food that he furnished, taking pictures, and chatting about everything from Disney movies to his friendship with author Harper Lee. (To be sure, there was no real interview. He talked and I listened. But believe me, there was something real.)

I remember that throughout the day, quail hunters were weaving in and out of the property, and Coach Dye always made time for a chat or a photo, just whatever the person wanted. He was gracious that way. I think he loved to host, loved having folks visit his farm. He found that people brought richness to his life. Yes, Pat Dye was a welcomer. 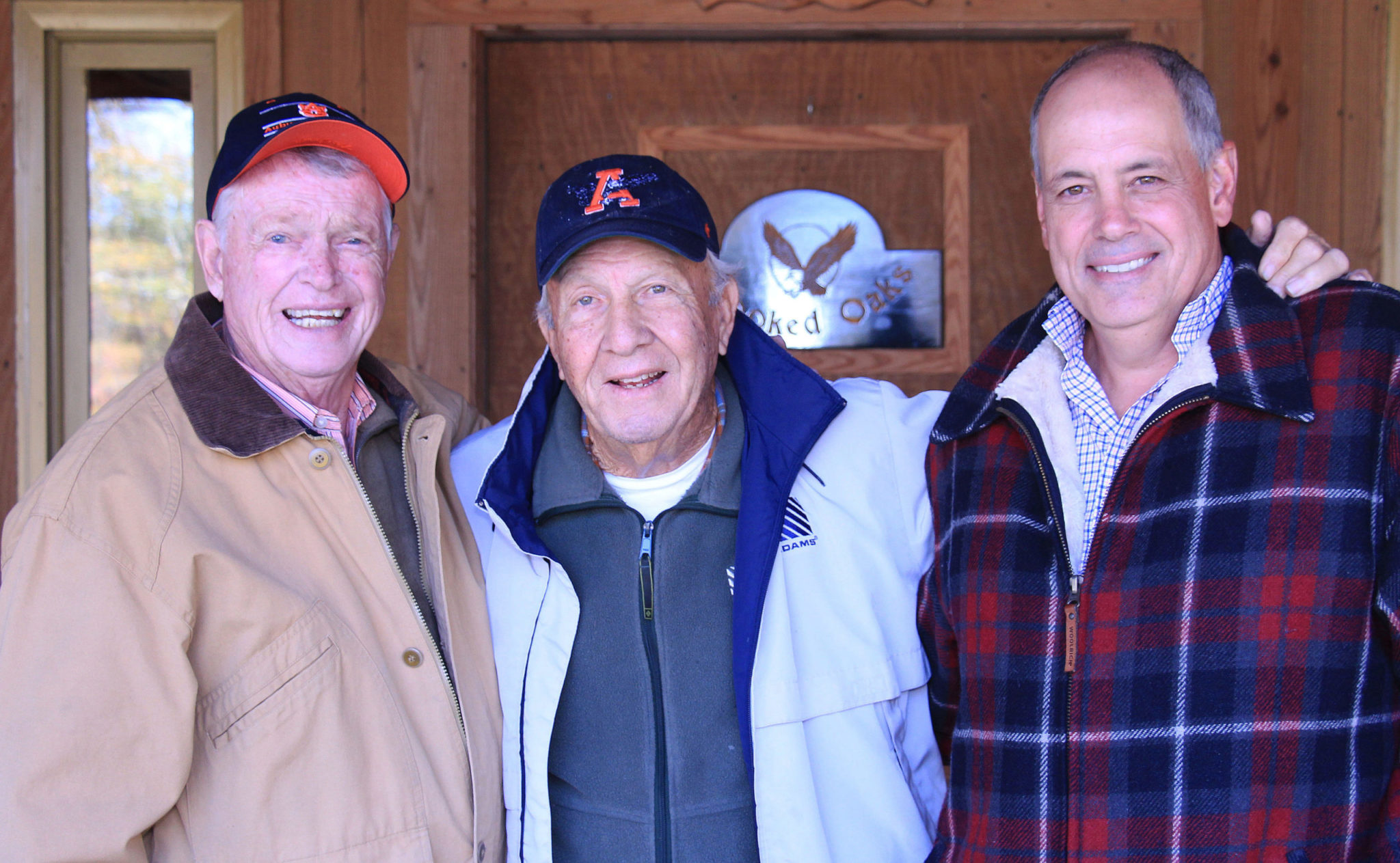 Pat Dye, middle, frequently entertained visitors at his farm, a mere 15 miles from where his Auburn football teams dominated for a decade. Photo by Al Blanton

As far as me, I will remember rattling around his property in an old truck, just Coach Dye and me, like pals. I’ll never forget him asking, “Are you an Auburn man?” in his thick Georgian dialect — “Awburun” — and I was nervous to answer.

“No sir,” I muttered clumsily.

And that was okay. That was plenty okay.

I will never forget the conversation we had in his cabin, all the machismo and wood around us, how he opened up about his love for Auburn and other things that were important to him.

At the end of the experience, I walked away with a feeling of gratitude. He didn’t give me his autograph. He gave me something much more precious.

He gave me his time.

Perhaps Coach Dye’s biggest on-field accomplishment was that he robbed the runaway stagecoach. In 1981, when he arrived at Auburn, Alabama had won 8 consecutive games in the rivalry known as the “Iron Bowl.” The Tide won the year Dye arrived, too, but in 1982, something happened: a play now known as “Bo Over the Top” brought the horses to a halt.

For the next few years, Pat Dye helped transform the Iron Bowl into the greatest rivalry in college sports. There was just something iconic about that era, those games at Legion Field. From the tweed jackets over sweaters to The Game hats to bulky shoulder pads, this was the Golden Era of the Alabama-Auburn rivalry. If you don’t believe that, consider that many of the games are now known by the plays that defined them: Bo Over the Top, Wrong Way Bo, The Kick, Reverse to Victory.

Perhaps what saddens me the most is that Pat Dye will never again tell the stories of the Iron Bowl — of college football — that were stored inside his memory. Many of them are gone forever, the ones that were told their fate resting now in the hands of researchers and history-lovers.

Coach Dye’s death reminded me of a song by The Steeldrivers called “Where Rainbows Never Die.” It tells the sad story of an old man who is preparing to move on from this life.

But in my day, I sure was something

‘Fore I felt the heavy hands of time

Time to lay these burdens down

Had enough of this old world of worry

Gonna trade my trouble for a crown

A few weeks ago we learned that Pat Dye was sick, and some feared that his time to trade his trouble for a crown was approaching. But there was one distinct difference between him and the old man in the song:

Young folks paid him mind. He was relevant. People listened to him. They wanted to know what he had to say.

I’ve been amazed at how many people have been saddened by the death of Coach Dye, folks on both sides of the aisle. I’m certain there are many Alabama fans who had heavy hearts the day Dye passed on to the hereafter, not just because we respected the man who had the guts to stand up to Alabama, but because a portion of that era died with him.


After all, they just don’t make men like that anymore.

Cover photo of Pat Dye on the front porch of his farm with his dogs by Al Blanton.