Bag it, Tim: As a baseball laughingstock, Tebow actually hurting his message

The most covered Grapefruit League game in recent memory was played Wednesday before 6,538 people at First Data Field in Port St. Lucie, Fla.

The New York Mets hosted the Boston Red Sox, with the home team fielding a lineup featuring most of the regulars it plans to play for the upcoming season. With one glaring exception, of course: Tim Tebow at designated hitter.

The top of the order consisted of Curtis Granderson, Neil Walker and Yoenis Cespedes, who combined to launch 84 home runs last year. In the 4, 5 and 6 holes were Jay Bruce, Lucas Duda — both have clubbed 30 homers before — and Travis d’Arnaud. In the seventh spot was Amed Rosario, one of the organization’s premier prospects.

And then there was Tebow hitting eighth, which made about as much sense as Joe Mauer playing quarterback for the Dallas Cowboys.

In their 8-7 victory over the Red Sox, the Mets had 13 hits. But Tebow was 0-for-3 with two strikeouts and failed to get the ball out of the infield. As a matter of fact, he was responsible for five of New York’s 24 outs on the afternoon.

On each of his Ks, he was caught looking — highlighted by a handful of curious glances back at the home plate umpire. The one time he put the ball in play, Tebow grounded weakly into a 6-4-3 twin killing. The one time he reached base, courtesy of a hit-by-pitch, he was doubled off first on a line drive for yet another rally killer.

But the fans saw what they wanted to see. Tebow got a standing ovation after the first double play because a run scored. No RBI, by the way.

As you can no doubt tell by now, I’m not a fan of Tebow’s hardball publicity stunt. Let’s not hide behind euphemisms here. This is little more than a former Heisman Trophy winner using fame to satisfy his inner Peter Pan. 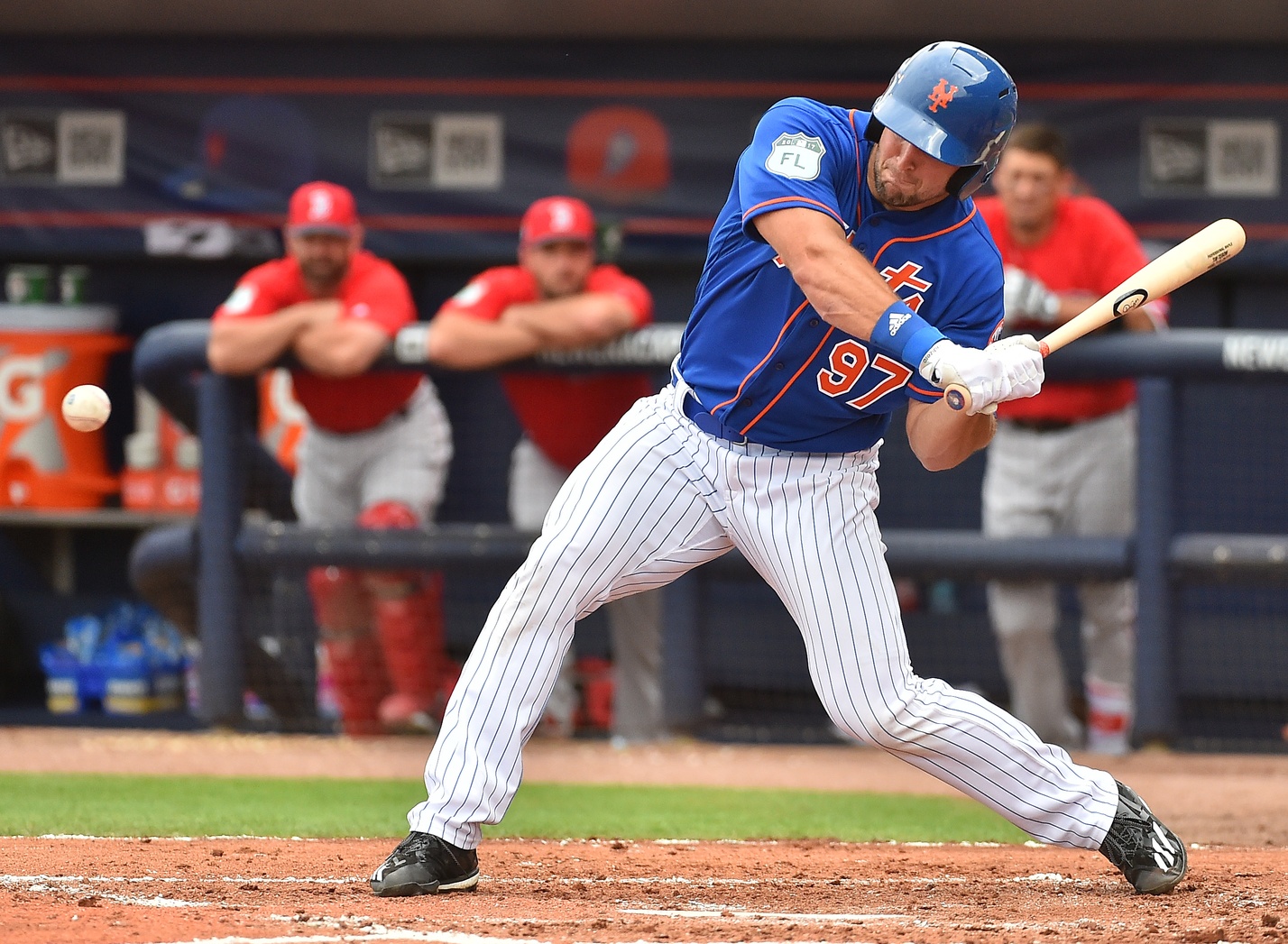 One of the greatest quarterbacks in college football history, Tebow accomplished everything possible at that level of competition. Flaming out in the NFL — he’s not the first Heisman alumnus to do so — was no crime. As a matter of fact, his relentless pursuit to be a QB on Sunday was admirable.

Except said pursuit wasn’t so relentless after all. They need passers in Canada. They need them in the arena league, too. Tebow chose TV instead.

Clearly, there is some attention-seeking behavior on display here. Tebow didn’t want to cross the border or play arena ball. No bright lights. He also said no to switching positions. Field generals get the glory, which he can in turn give to God.

So now, with the NFL announcing so loudly that it wants nothing to do with him — he hasn’t thrown a pass that mattered in half a decade — conveniently he had another lifelong dream up his sleeve. While he hadn’t played baseball since his junior year of high school in 2005, reportedly he was quite the hitter once upon a time.

Nevertheless, the fact that Tebow routinely blasts opposite-field bombs in batting practice is immaterial. Everyone mashes in BP.

There’s a weekend-warrior golfer at most every public course in America that can drive the ball 325 yards. But that doesn’t mean he’s anything close to a PGA Tour professional. Chances are, he can’t hang with a local club pro.

Tebow is essentially “Happy Gilmore” at this point. In the comedy, Adam Sandler’s character was a wannabe hockey player — to be clear, Tebow was no pigskin wannabe — who happens to destroy a driver a country mile. Still, he finished last in his initial tournament because he had no idea how to, you know, play golf.

Yes, Happy eventually defeats Shooter McGavin for the Tour Championship. I don’t need to remind you that it was, well, an Adam Sandler movie, do I?

Despite Tebow going to Florida and me having attended Florida State, I’ve actually been a fan of his for years. I covered him in high school. I covered him at the NFL Scouting Combine, too. He’s a once-in-a-lifetime person. 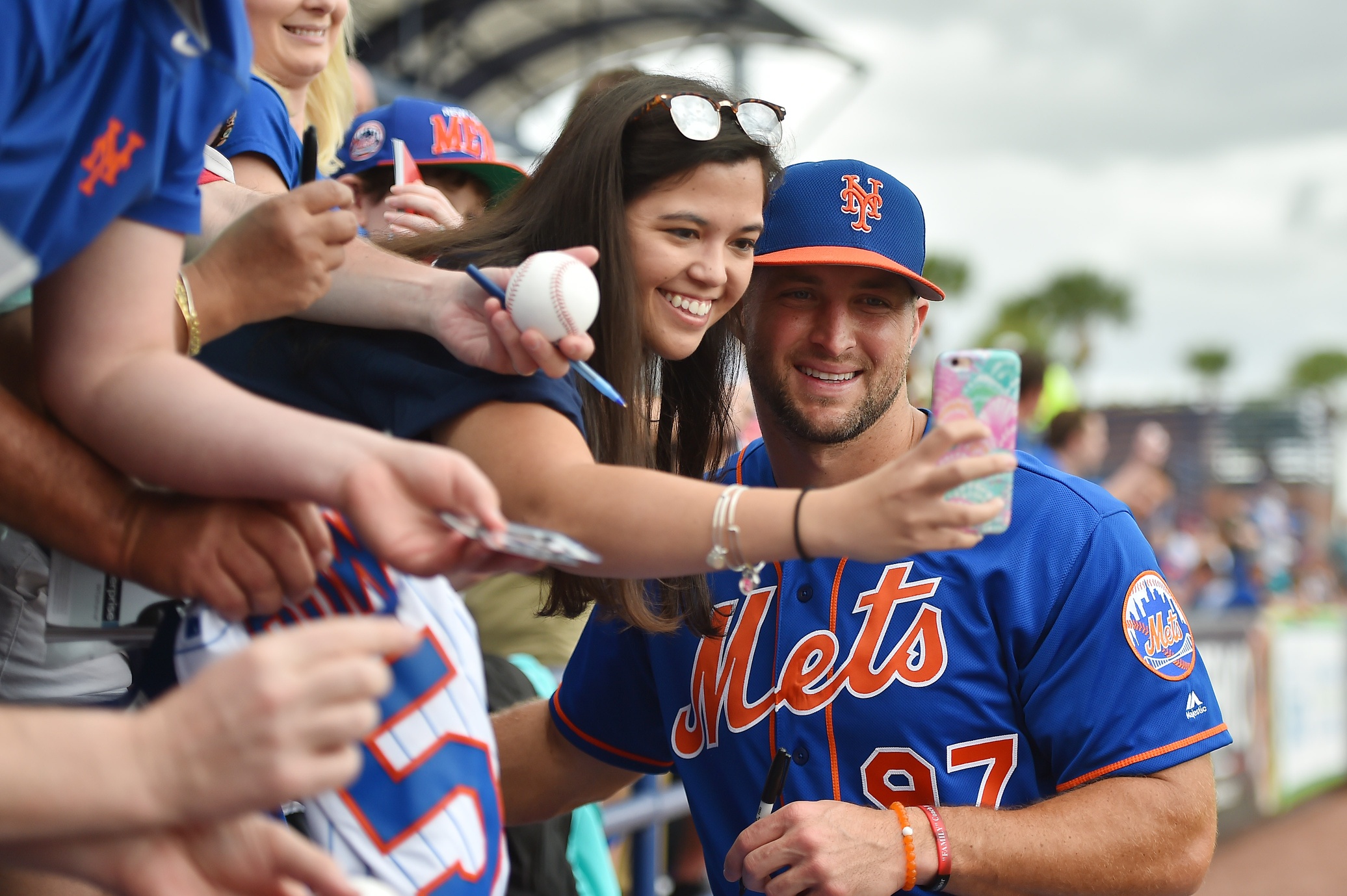 Make no mistake about it: He’s a better man than I am by almost every reasonable measure. I could never dream of being so positive, so charitable and so philanthropic. Every time there’s video of him visiting a sick child in the hospital — I’m so fortunate to have two healthy and happy kids — I get misty-eyed.

I understand what he’s after. As far as Tebow is concerned, the bigger his platform, the more good he can do.

That being said, his name already carried enough gravitas as a gridiron great. As an analyst for SEC Network, he continues to be in the public eye. I’ve commended him for his television work. He’s not bad on camera.

But what’s next once — not if, mind you — he fails on the diamond? We’ve seen Tebow swing a golf club before. Will he start taking sponsor’s exemptions to tee it up alongside Jordan Spieth? We’ve also seen Tebow in the weight room. Does he ask Greg Glassman to compete in the CrossFit Games? His revolution must be televised, apparently.

Either he’s oblivious to being one step short of sticking his head inside a lion’s mouth, or he’s in on the joke. By no means am I saying Tebow’s message is disingenuous. But that message is now encased in an unnecessary gimmick.

Tebow said when he arrived at spring training that his mission in life — what matters more to him than any touchdown or home run — is “bringing faith, hope and love to those needing a brighter day in their darkest hour of need.” He was already doing that as a football icon. How is that mission furthered by becoming a baseball laughingstock?

His favorite band is the country music trio Rascal Flatts. When this baseball thing doesn’t pan out, maybe Tebow can make them a quartet.

RECENT ARTICLES
FLORIDA
Travaris Robinson said he was headed to Florida until Manny Diaz won him over: 'At the end of the day, I want to win'
FLORIDA
Former Florida TE Ben Troupe brutally trolls Georgia when asked about Tom Brady's longevity
FLORIDA
Florida officially announces hire of cornerbacks coach/recruiting coordinator Jules Montinar
FLORIDA
Kyle Trask will reportedly not participate in the Senior Bowl
PRESENTED BY