Georgia football: 5 reasons the Bulldogs will beat Florida in the Cocktail Party

The World’s Largest Cocktail Party. The No. 6 Florida Gators and the No. 8 Georgia Bulldogs. An experienced quarterback in Jake Fromm going up against a relative newcomer in Kyle Trask, called into action in relief of an injured Feleipe Franks.

And, with both teams bringing one loss to Jacksonville and with the first College Football Playoff rankings just days away, a game that could change the course of the remainder of their seasons.

Can Georgia get an inside track to winning the SEC East and keep its CFP hopes intact? Here are five reasons why the Bulldogs will take down the Gators on Saturday:

While Georgia has given up an average of 7.8 points in the first half—11th in FBS—Florida is 39th in the country with 11.8. That’s not terrible, but it shows that there’s a route to getting some points on the board against the Gators. As far as first-half scoring, Georgia’s at 16.3 while Florida is at 13.2.

The more points the Dawgs can put up in the first half, the better. No team in the country is better than Georgia at keeping opponents off the board in the second half, so the bigger the lead it can build in the opening frames, the better.

A defense that has limited big plays

For as much bellyaching as there has been about James Coley’s offensive playcalling, Georgia’s defense under Dan Lanning has been solid. (It’s almost as if his boss won multiple national championships as a defensive coordinator at one of the top programs in the country or something.)

Simply put, along with the fact that it has been virtually impossible to score on in the second half, Georgia doesn’t allow explosive plays often. The Dawgs haven’t allowed more than 163 yards rushing in any game this season, and they have held opponents to an average of 3.0 yards per attempt. The most total yards they’ve given up is 343 against Tennessee, with Marquez Callaway accounting for 73 of those on one play. Outside of that and a 60-yard touchdown given up to Murray State wide receiver and former Gator DaQuon Green, their longest pass play allowed has been 46 yards. The longest run they’ve allowed is 35 yards, also against Murray State. 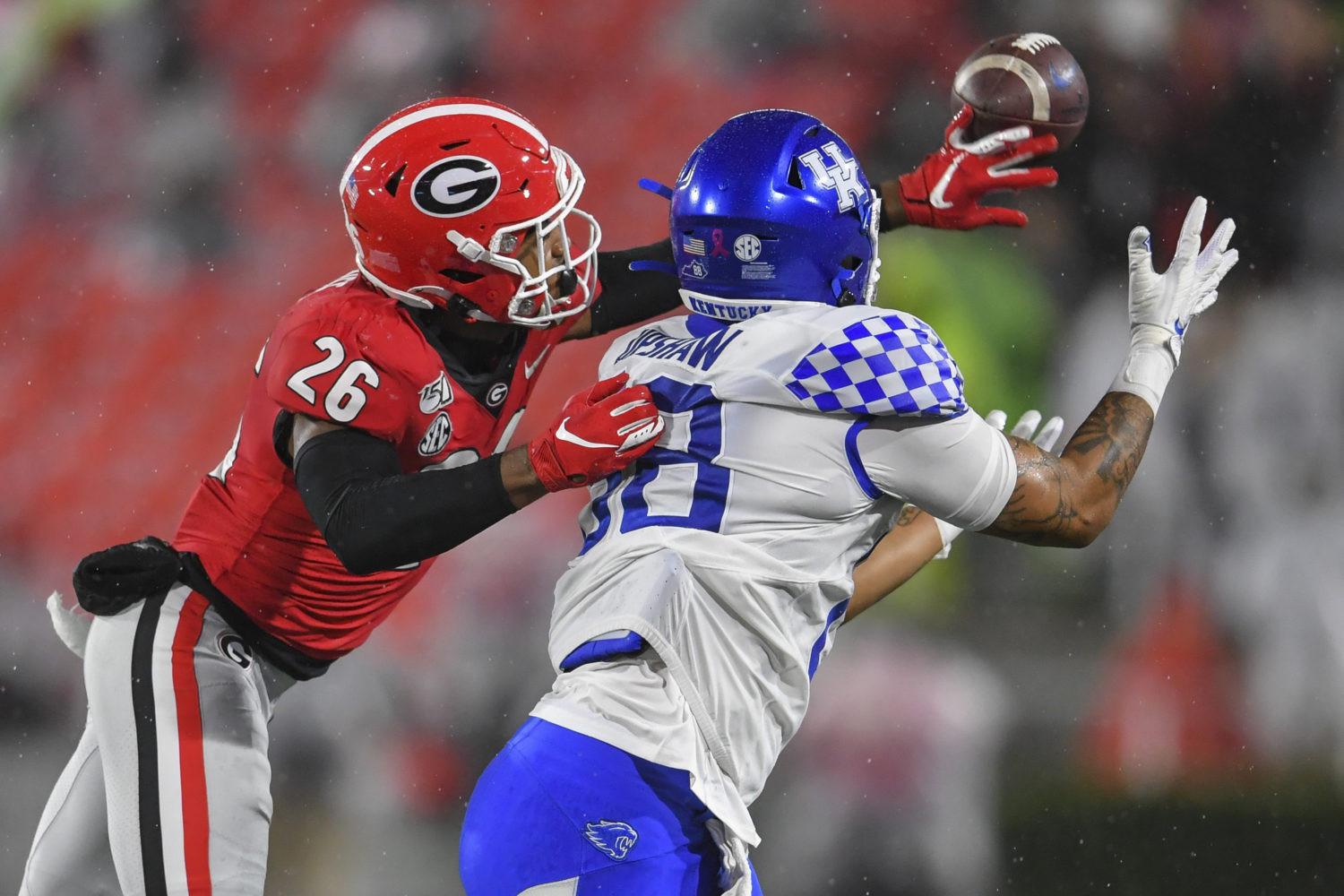 I’ve mentioned Florida’s secondary several times this week; it’s probably one of the best in the country. It will make it a challenge for Fromm to get the ball where he needs to.

If the Dawgs are to win this one, outside of running the ball well (more on that a little later), you might see some different receiver routes drawn up to keep the Gators on their toes. For proof of how good Florida is against the pass — outside of the interceptions and pass breakups — is that, like Georgia, it doesn’t give up many big plays. Its longest pass play allowed is just 54 yards in a loss to LSU.

The Dawgs have to find a way to exploit the Gators’ secondary, and that may involve forcing Florida’s defense to adjust to a style of football that favors what Georgia’s comfortable with. The Bulldogs might still be able to win if they can’t get the passing game going, but it would make things a great deal easier if they can.

D’Andre Swift and Brian Herrien simply doing what they do

When Swift and Herrien are at their best, that makes Fromm’s life so much easier.

While it might be a little tougher than usual to run the ball with players like Jon Greenard and Jabari Zuniga in Florida’s defensive arsenal, it won’t be impossible: This is a group that has allowed 200-plus yards per game on the ground. That might make it a bit easier for Swift and Herrien to find those lanes to rack up the yards and help move the Dawgs down the field. If not, will Coley adjust how they run and make tactical adjustments on the fly?

And while the Dawgs have given up zero rushing touchdowns — the only team in FBS with that designation — the Gators’ red-zone defense is nothing to sneeze at, as it has allowed only four touchdowns from within 20 yards out. But Georgia’s 15 touchdowns inside the red zone are tied with LSU for the best mark in the SEC. 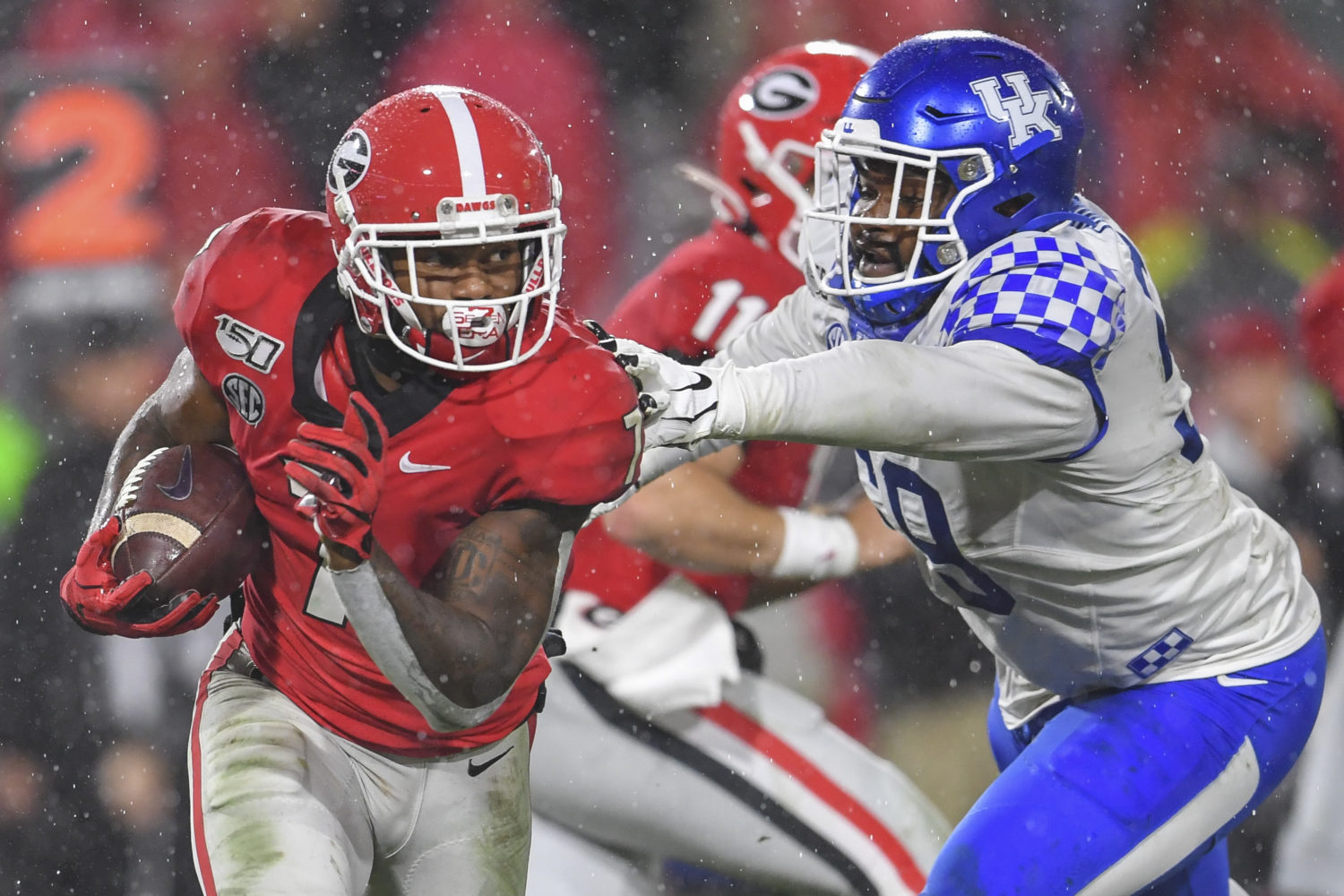 The offensive line will rise to the challenge

This bleeds into the previous point a little, but it’s so important: One of the big challenges lies on the offensive line, as this will be one of the best defenses it has seen thus far. Is it ready?

I’d agree that this is a “prove it” game for the offensive line. It’s still trying to shake off the bad taste of the South Carolina game that, I think, gave the Gators a solid blueprint for how to attack and, potentially, win, and the weight of this game will provide a motivating factor. Anything less than the high standards this unit has set for itself will mean that this Bulldogs team will walk out of TIAA Bank Field with a loss and its playoff hopes flushed down the drain.