The good news continues for Georgia’s offense as starting left tackle Jamaree Salyer has announced he will return for his senior season in Athens.

This is the latest promising news for Todd Monken’s offense following quarterback J.T. Daniels and running back James Cook both announcing they would return to Georgia for 2021. One starter that will have to be replaced next season is offensive lineman Trey Hill, who has announced he will turn pro.

Salyer started every single game for the Bulldogs this season. He was named a team captain for the Alabama and Mississippi State games. During his college career, Salyer has appeared in 36 games for the Bulldogs.

The 2018 U.S. Army All-American arrived in Athens rated as a five-star prospect out of Pace Academy in Atlanta.

Here is the graphic Salyer shared to announce his decision to return to school for another year. 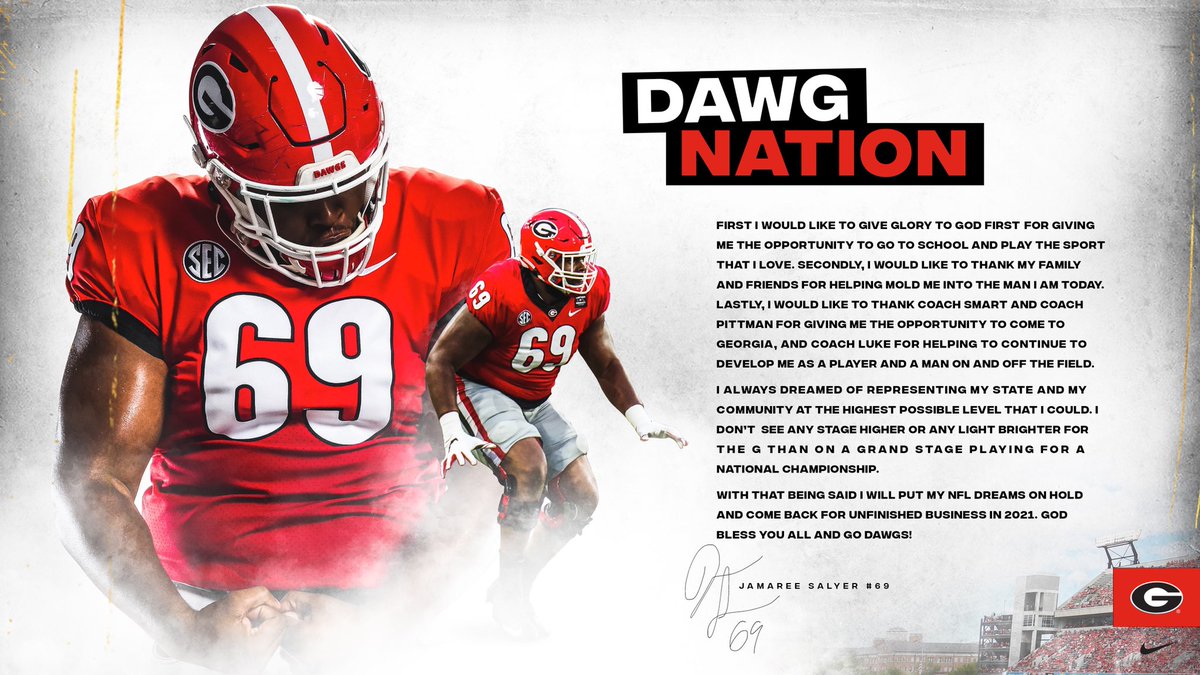 TRENDING
17,684 READS
Naming names: Why Tennessee must choose among these 3 candidates for its next head coach
15,318 READS
If he's eligible for Kentucky, Wan'Dale Robinson will be the sport's most impactful non-QB transfer in 2021
12,468 READS
To'o To'o and Gray are leaving, too? Whatever your expectations are for 2021 Tennessee, lower them
LATEST NEWS
View All
2 hours ago
Mike Krzyzewski bristles at question from student reporter following loss to Louisville
2 hours ago
Rick Pitino candidly shares his biggest regrets during his coaching career
3 hours ago
Report: Former SEC player, assistant targeted by Nick Saban to be Alabama's RB coach
4 hours ago
Ed Orgeron to reportedly interview NFL assistant with Louisiana history for DC position
4 hours ago
Matthew Stafford, Detroit Lions reportedly make decision on QB's future
4 hours ago
Miami Dolphins hire new QB coach who has a history coaching Tua Tagovailoa
VIEW MORE