Kentucky standout Ashton Hagans appears to be moving on. The sophomore announced Sunday via social media that he will be entering the upcoming NBA Draft. Hagans’ letter to Big Blue Nation did not state he would be hiring an agent, but Kentucky’s official announcement is titled “Hagans to Enter, Remain in NBA Draft,” making it clear the guard’s time at UK has come to an end.

“When I chose to come back for my sophomore year, I had some goals in mind,” Hagans says in his announcement letter. “First was to win a national championship. You know it’s killing me that we didn’t get the chance to compete for one this season, but I understand why we couldn’t. But, just know, we would have been right there. The second thing we did, which was to win an SEC championship. I also wanted to become a better all-around point guard. My coaches and my teammates really helped me improve and now I know I’m ready to take the next step.

“I just wanted to let you all know that even though I love Kentucky with all of my heart and really wish I could have played for a ‘ship, it’s time for me to live out my life-long dream and declare for the NBA Draft. It’s been my No. 1 goal since I first picked up a ball to take this step and I know my time is now. It’s so hard for me to say goodbye to the best fans in the world, because these last two years have been some of the best of my life.

“I want to give some shout outs to Coach Cal, KP (Kenny Payne), Barb (Tony Barbee), Joel (Justus), Robes (John Robic) and all of the staff. You helped me grow into a man and I know you’ll be there supporting me forever. To all my brothers, you all know how much love I have for you. Wish we could run it back one more time. Lastly, I need to thank my family. You’ve been there with me since day one. We’ve been through a lot and I hope I’ve made you proud.”

Wildcats head coach John Calipari shared his approval of Hagans’ decision on social media and in the official announcement.

“Ashton is ready for this,” Calipari said. “From where he was when he got here two seasons ago to where he is now isn’t even close. He’s a completely different player and he’s built his skills and his confidence to take that next step.

“We know what Ashton can do to change the game defensively and how much better he got offensively, but what’s going to separate him is his competitiveness. That kid is a winner. His competitive spirit drives him and is why I love him. If I’m going to battle, I’m taking Ashton.

“I wish we could have had the opportunity to chase his goals of a championship this season but I’m so proud of who Ashton has become. I’m happy for him and his family and will be behind them the entire way.” 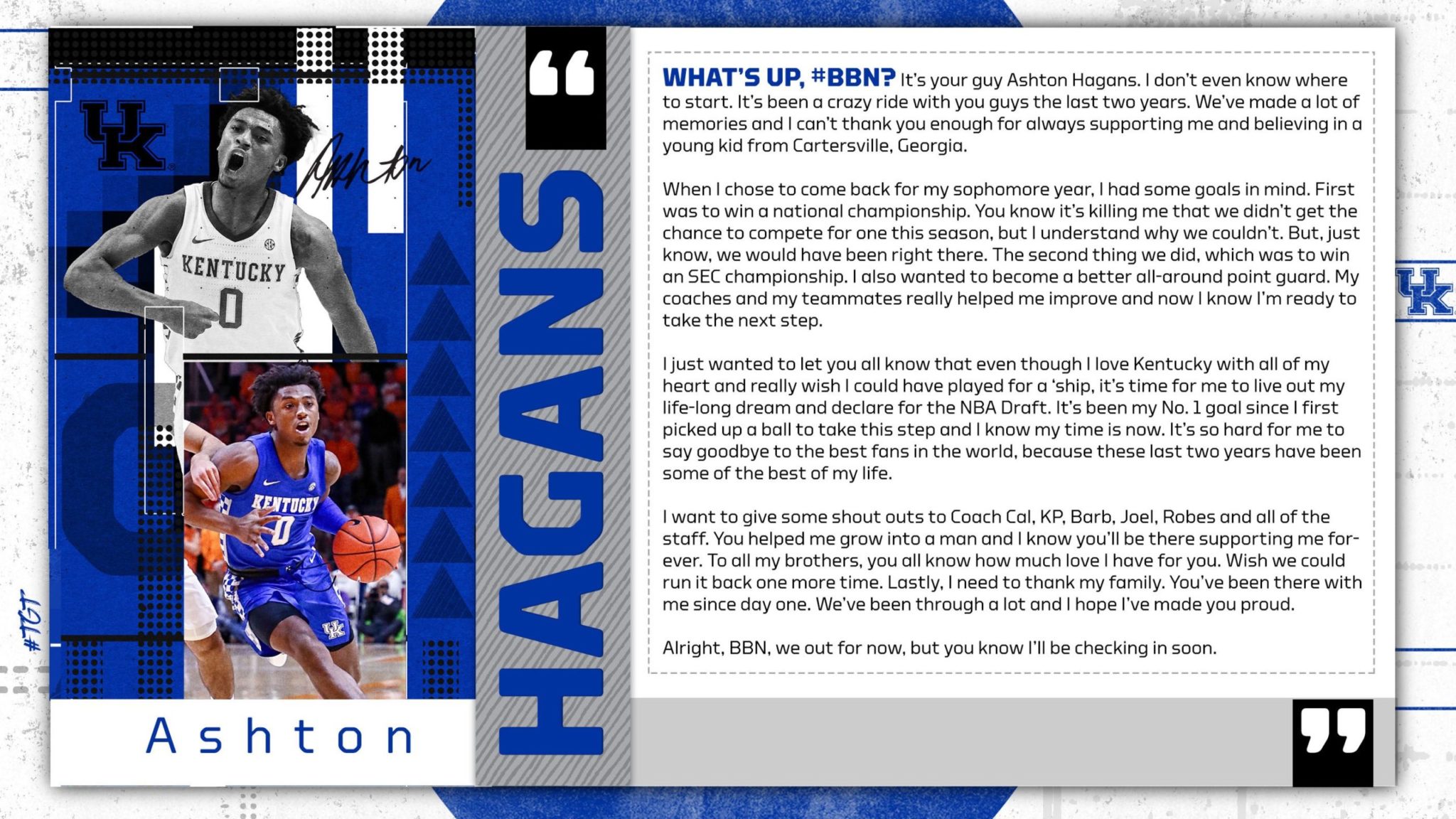