Quarterback battle aside, Kentucky offense will run through Benny Snell

The Blue team took care of the White team Saturday by a score of 31-14 in Kentucky’s annual Kroger Blue-White Game.

As is usually the case when there isn’t a presumed No. 1, most of the focus was on the battle at quarterback. Last year’s Week 1 starter, Drew Barker, was held out of the game as a precaution as he continues to rehab a back injury.

His replacement for much of 2016, Stephen Johnson, wasn’t overly impressive through the air for the Blue team, completing only 8-of-18 passes for 106 yards with 0 touchdowns and 1 interception — he was also sacked three times. Gunnar Hoak split time with both squads and finished a combined 16-of-24 for 174 yards and 2 TDs with 0 INTs.

However, no matter who ultimately wins the job at the game’s most important position, the Wildcats are Benny Snell’s team.

Originally a 3-star signee out of Westerville (Oh.) High School, Snell was a pleasant surprise in the SEC last season as a true freshman. He ran 186 times for 1,091 yards and 13 scores, and he didn’t even get a touch until Week 3.

There were 70 ball carriers that eclipsed the 1,000-yard plateau last year at the FBS level, but just eight teams in the country had two. UK was one of them with Snell and Stanley “Boom” Williams. With Williams leaving early for the NFL Draft — he’s a long shot to get selected, though — the backfield now belongs to Snell. 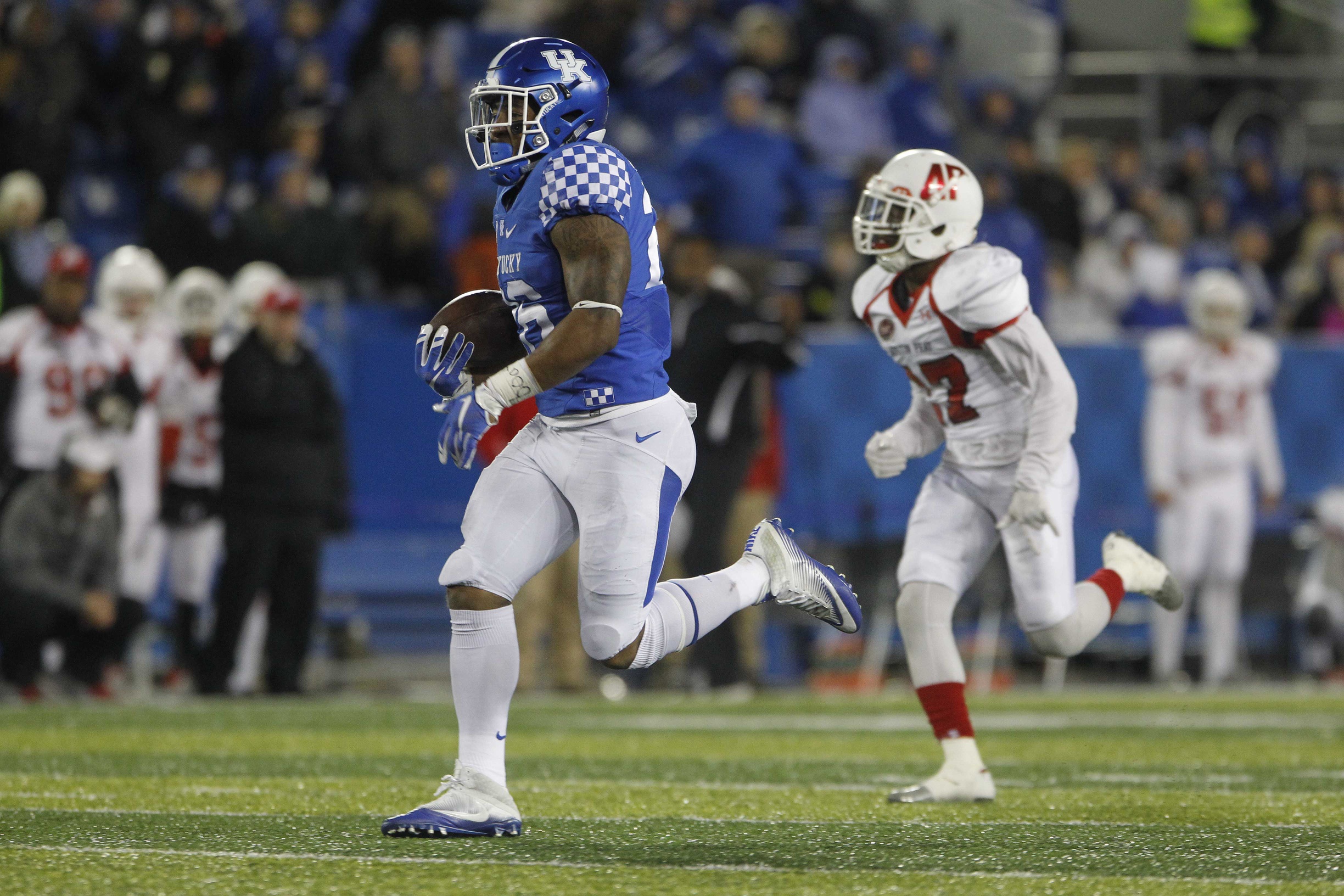 While he only carried the ball 3 times for 22 yards and a touchdown in the spring game, coach Mark Stoops already knows what Snell (above) can do.

If the ‘Cats hope to continue having a one-two punch on the ground this season, then they must be thrilled with what they saw from Sihiem King. He had 19 rushes for 110 yards and a pair of TDs for the Blue club.

Leapfrogged on the depth chart this past year by Snell, King had just 11 carries for 81 yards and 1 score. But with Williams off to the pros — and offensive coordinator Eddie Gran likely to keep a run-heavy approach — there’s reason to believe that the rising junior will finally get a chance to show what he can do.

Overall, Gran was pleased with the results of King getting more of a workload, although he still made a mistake here and there.

“He’s been performing like that all spring,” Gran told reporters after the game. “He was very productive, and we didn’t do a lot of stuff now. We’ve got some stuff from him, and I think you’re going to be able to see him evolve. We still have to get him to go north and south. The 7-yard-line stuff and losing 5 is unacceptable. But he’s a hard runner and protective of the ball, and that was really good to see. That’s what I wanted to get out of him today.”

No matter who emerges at QB, Kentucky won’t be prolific passing the ball in all likelihood. The Wildcats will surely look to pound the rock again, but giving it to Snell 30-plus times every week is risky.

“He’s a real elusive guy, real loose,” Snell said of King. “He’s good at making people miss. You know, the one thing with Si is he can make anybody miss. But the one thing that we always just work on with him is I just try to just get him upfield right away because it be like third down, third-and-2, and he got to get them first downs. He will bounce a lot and break a lot and he’ll get it eventually, but I just try to get him to make one cut right away. But his vision and how elusive he is, he is very special.”

Presumably, the QB competition coming into spring practice was Barker vs. Johnson. However, Barker being held out of action and Johnson’s shaky performance opened the door for Hoak — UK managed to keep the redshirt on him last season — to make it a three-way race. Stoops (below) may have more questions now than answers under center. 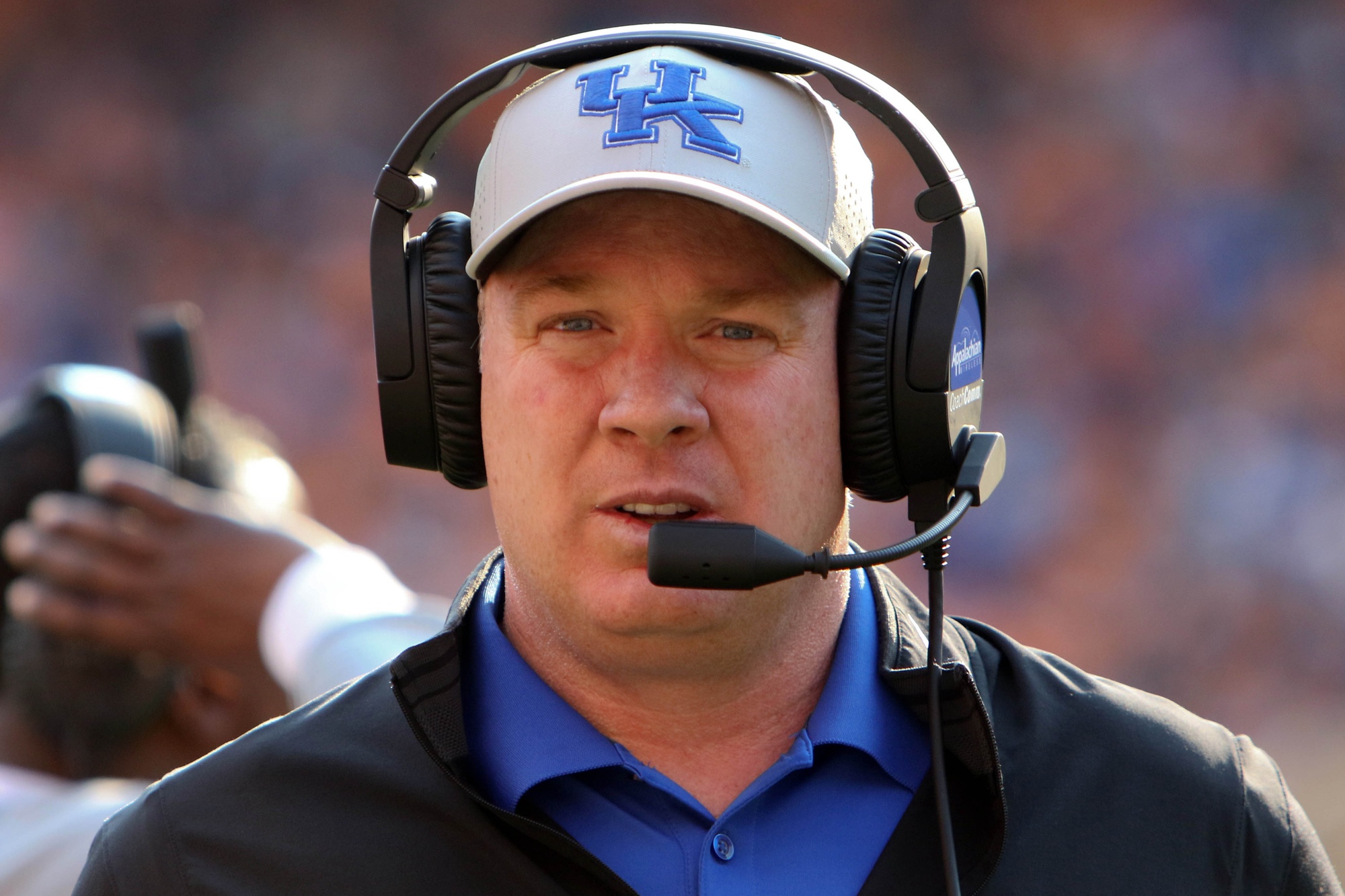 “He’s been very poised,” Stoops said of Hoak. “You see he’s effortless at times, and I just like the way he handles himself back there. He throws a very catchable football. He’s very accurate. The more experience he gets, the better he looks.”

The quarterback situation is cloudier than Stoops would like, but his depth chart at tailback seems to have survived Williams’ departure.

The East is there for the taking this season. Two-time defending champion Florida remains unproven at QB. Georgia hasn’t played as well as its recruiting suggests it should. Tennessee lost a ton of talent off last year’s roster.

After a horrid start in 2016 — blowing the opener to Southern Miss at home was especially ugly — UK won its final two games on the schedule and went bowling for the first time during the Stoops regime. The ‘Cats upsetting Louisville and Heisman Trophy winner Lamar Jackson in the regular-season finale was an eye opener, too.

While Kentucky is a blue blood on the hardwood, it never will be on the gridiron. Still, Stoops and Co. have a chance to play spoiler.