The 6-foot-2, 224-pound quarterback suffered a serious knee injury in Mississippi’s 37-27 win over Georgia Southern, tearing his ACL as well as his lateral meniscus. He is scheduled to go under the knife as soon as possible.

The Buffalo native completed 62.5 percent of his passes with a touchdown-to-interception ratio of 19-to-8 — both were a step down from last year (65.1, 31-to-13) — in nine games. The dream season Kelly envisioned as a senior is officially a nightmare with injury added to what was already a disapponting 4-5 record.

It’s fair to wonder if turning down the NFL Draft for one last opportunity at the collegiate level was a wise decision.

Hindsight is 20-20, of course. Additionally, Kelly was a mid-round pick at best had he decided to turn pro after his junior year. Jared Goff, Carson Wentz and Paxton Lynch would’ve been safe as the top QB prospects.

However, when asked at Media Days back in July what his goals were for this season, he was crystal clear: 15-0, an SEC championship and a national championship. The undefeated record went out the window following a loss to Florida State in the opener — then a Week 3 defeat to Alabama all but eliminated any title talk.

Aside from the team goals, it was safe to say that Kelly also wanted to work on his own game and elevate his stock accordingly.

When scouts turned on the tape in 2015, they saw a lot of talent but a lot of flaws, too. He played a little too loose with the football, which led to turnovers. Coach Hugh Freeze’s system did him no favors, either.

Nevertheless, Kelly has proven to be the same signal caller this year that he was last year. Sure, when he gets hot, he can carve up any defense in the country — even the No. 1 Crimson Tide. That being said, he still turns it over too often. His footwork is questionable. In the simplest of terms, he hasn’t improved. 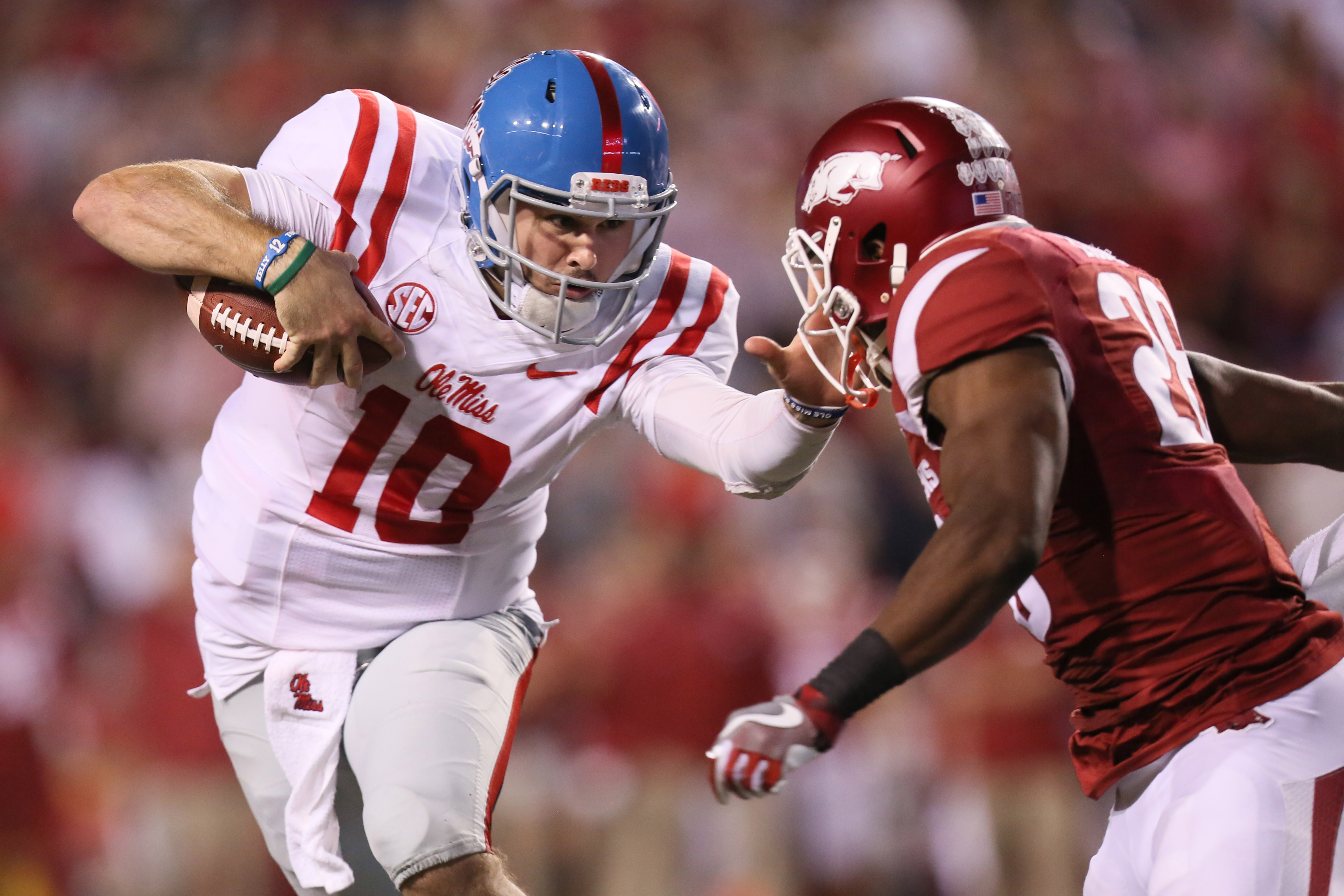 If coaches and general managers didn’t see him as a first-round pick before, there’s no reason to believe they see one now.

Couple that with the knee issue, which will surely prevent him from being at full strength for events like the Senior Bowl and Scouting Combine, and Kelly might have actually cost himself money going back to school.

Next in line for the Rebs is Jason Pellerin — a redshirt freshman who has seen limited action this season as a change-of-pace option. He’s rushed 25 times for 96 yards and 3 TDs, mostly in short-yardage and goal-line situations. While he’s thrown 2 TDs passes on only 13 attempts, he also has 3 INTs.

Originally a three-star recruit out of New Iberia (La.) Catholic High School, he’ll get the start in Week 11 at Texas A&M.

No offense to Pellerin, but when Ole Miss fans get excited about the future at the game’s most important position, they’re not talking about him. They’re talking about Shea Patterson, who’s currently redshirting.

The crown jewel of Freeze’s most recent recruiting class last February, he was a five-star signee out of Bradenton (Fla.) IMG Academy. He was the one — not Georgia’s Jacob Eason, no matter what Bulldogs fans say — rated as the No. 1 quarterback in America according to the composite rankings at 247Sports.

The assumption all along was that Patterson would inherit the gig after a one-year apprenticeship under Kelly.

A convincing case can be made that said apprenticeship should be abbreviated. That’s partially a reflection of Pellerin’s somewhat limited upside as a passer. He’s more athlete than QB at 6-foot-4 and 230 pounds.

Conversely, Patterson was MVP of the prestigious Elite 11, which advertises itself as “the nation’s premier quarterback competition.” 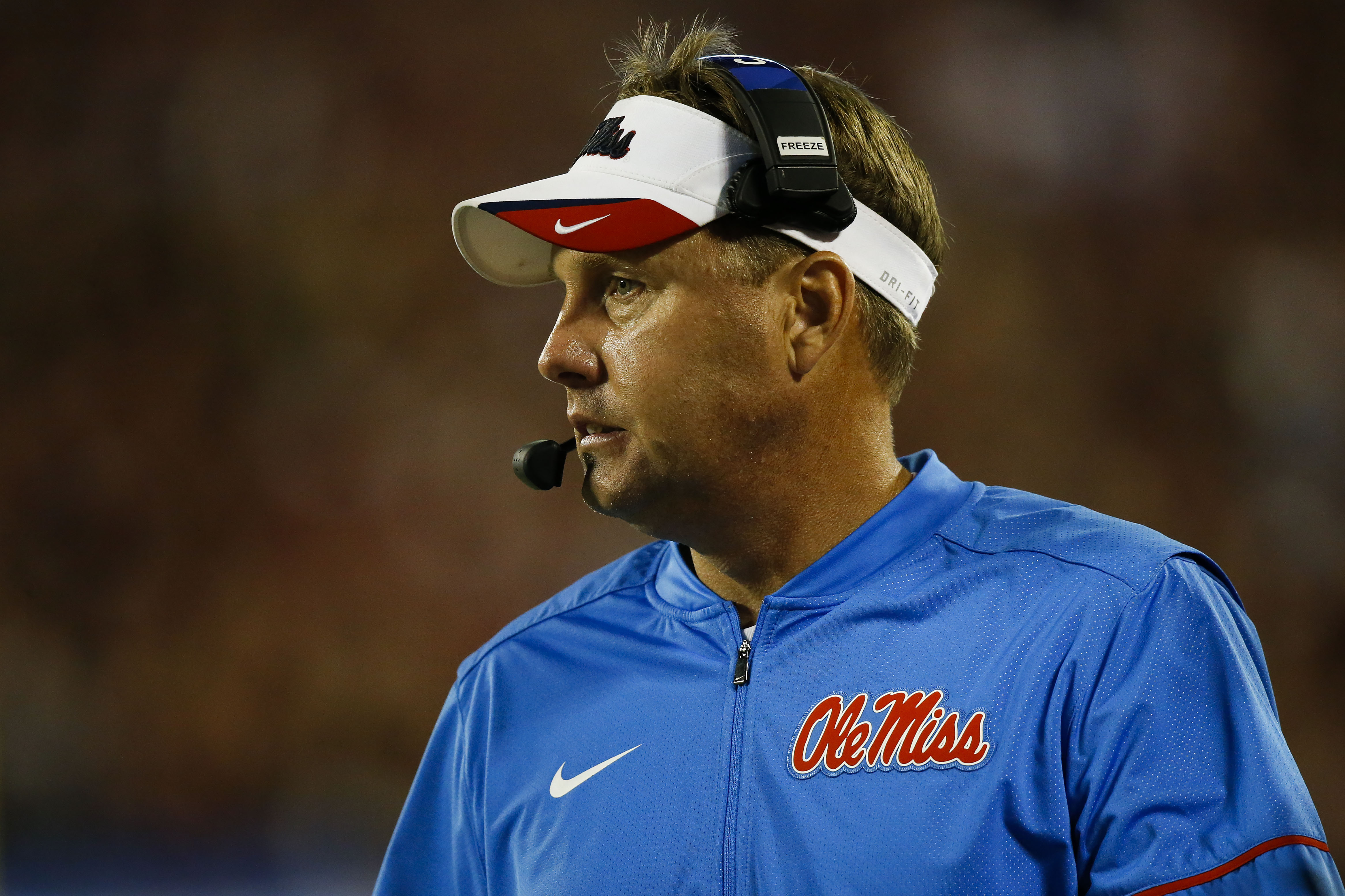 Unlike the aforementioned Eason, who was expected to compete for the starting job at UGA right away, Patterson understood that he wouldn’t see the field in Year 1. Kelly was regarded as the best passer in the SEC.

But with the Rebels two wins shy of bowl eligibility and only three games left on the schedule, it’s time for Freeze (above) to begin preparations for 2017. If the plan was for Patterson to succeed Kelly in shotgun formation — he’ll never be “under center” in this scheme — then go ahead and see what the kid can do.

There’s no better way to learn what Patterson is made of than subjecting him to the wrath of the 12th Man in College Station.

If Patterson continues to redshirt and doesn’t take a single snap this year, he’ll be that much more of a question mark heading into next season, even with all those first-team reps in spring ball and fall camp.

What’s the downside? We’ve already seen a handful of true freshman quarterbacks in the conference — with the exception of Eason, none were as celebrated in high school as Patterson — have various degrees of success. Additionally, it’s Week 11. He should be much more ready than he might have been in Week 1.

Yes, burning Patterson’s redshirt now means one less year of eligibility down the road. There’s some risk, for sure.

Still, if Patterson is everything he’s supposed to be, he’ll never be a fifth-year senior anyway. Best-case scenario, he tears it up at Mississippi for a while and then declares early for the draft in 2019 or 2020.

It’s become an impromptu rebuilding season for Freeze, so there’s no point in selling out to win a few more games and earn an invitation to the Independence Bowl — this team is coming off a Sugar Bowl appearance and had College Football Playoff aspirations. Pellerin might be the better option today, but he likely won’t be tomorrow.

While Pellerin can beat Vanderbilt and Mississippi State this year, Patterson has the potential to beat ‘Bama and LSU next year.