When Ole Miss began its rebuilding job under head coach Matt Luke, it did so from the chancellor on down. Saturday in Tuscaloosa, the rebuild was evident, as the Crimson Tide dominated the Rebels, piling up 31 points in the second quarter and winning 59-31. The Rebels fell to 2-3 (1-1 SEC) on the season.

Tuscaloosa has not been kind to the Rebels over the years. Ole Miss has won only twice inside Bryant-Denny Stadium. Aside from the win in 1988 on Homecoming, the 2015 game is the one freshest on the minds of fans.

While the game didn’t end in the Rebels’ favor, there were positives to build upon. Most notably, according to the Ole Miss media relations office, freshmen accounted for 387 of the 476 yards of offense, good for 81.3 percent. All four TDs were by Rebel freshmen as well. It was a nice sight for the staff to see so many young players step up.

The offense wasn’t the problem. Quarterback Matt Corral, who started the first four games for Ole Miss, watched from the sideline as freshman John Rhys Plumlee was thrown into the fire.

The freshman from Hattiesburg, Miss., led the Rebels in all offensive categories, passing for 141 yards and rushing for 109. Accounting for all three touchdowns, two by the pass and one by the run, Plumlee earned every yard on the ground against the stout Tide defense.

The Rebels had some success early on the ground, jumping out to a 10-7 lead. It was another freshman who had a great day running the ball in Jerrion Ealy, who ran for 68 yards on 11 carries. Freshman Snoop Conner rounded out a nice day with a 6.2 yard-per-rush average and 62 yards rushing. 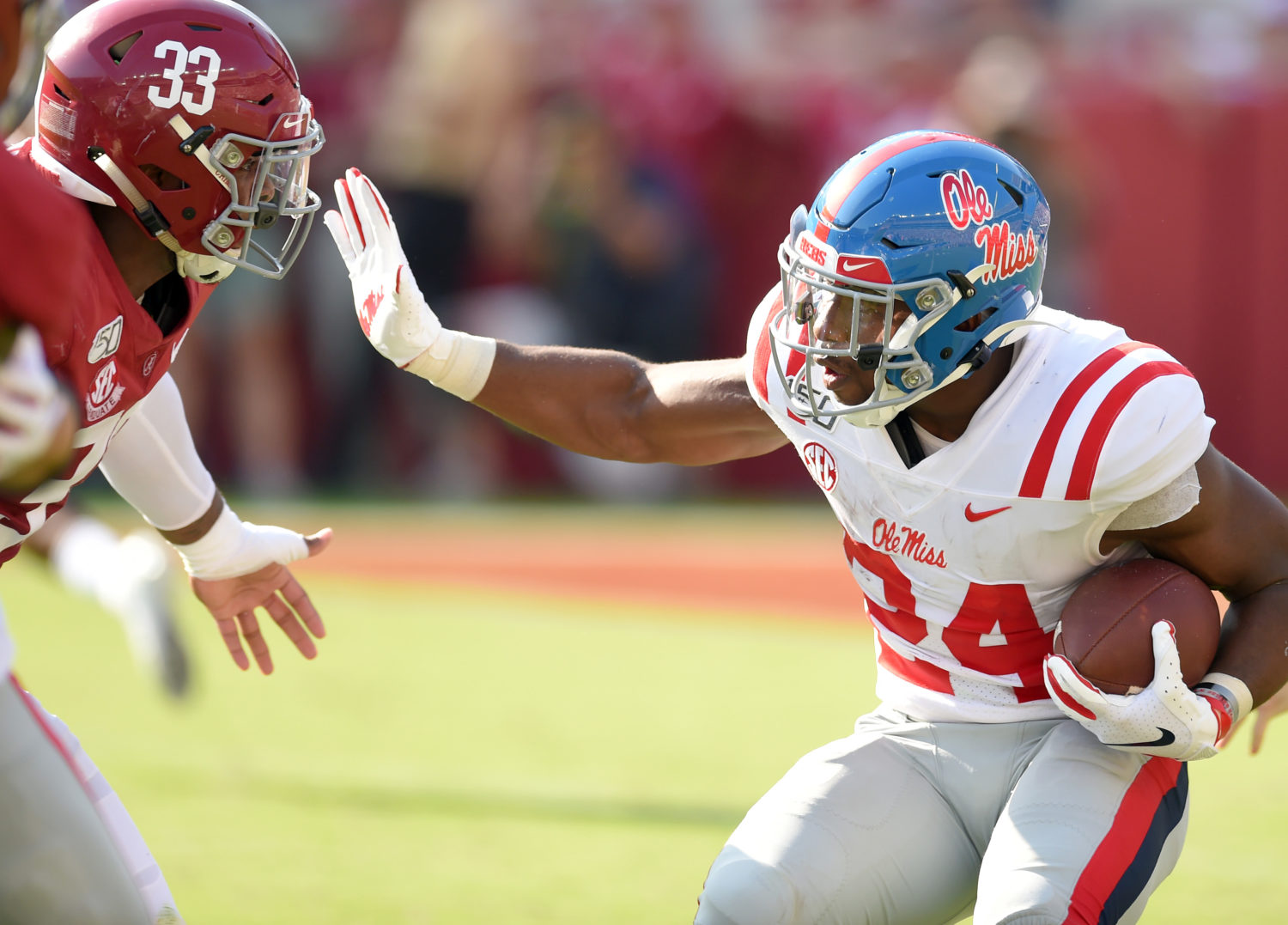 Scottie Phillips just couldn’t get anything going, as the Tide limited him to 27 yards on seven carries.

Ole Miss offensive coordinator Rich Rodriguez had a great game plan, essentially utilizing the strengths of Plumlee’s athletic ability, running a combination of the Wing T and spread offense all in one.

The Rebels had the Crimson Tide on its heels throughout the first quarter. Unfortunately for the Rebels, Alabama scored 31 straight points in the second, forcing Ole Miss to abandon the more methodical type of offense in favor of a more traditional passing attack.

Speaking of the 31-point second quarter, the Rebels gave up 418 passing yards and six touchdowns to Tide quarterback Tua Tagovailoa. He finished the day 26-of-36 and didn’t throw an interception.

It was also a record day for wide receiver DeVonta Smith, who finished with 11 catches for 274 yards and five  touchdowns. If you are wondering about future NFL first-round pick Jerry Jeudy, he hauled in eight passes for 84 yards.

It was an awful day for the Ole Miss secondary, which looked like the defense of last season. To be fair, I’m sure Alabama will make a lot of teams look bad. What will stick in the minds of the Ole Miss coaching staff will be the missed tackles and busted assignments. It was frustrating to see a receiver hemmed up, only to have a Rebels defender dive and miss a tackle.

Like on the offensive side, Ole Miss played a lot of true freshmen in Deantre Prince, Jay Stanley and A.J. Finley in the secondary. They are talented and will only get better.

As for defensive line pressure, it was serviceable. Benito Jones finished with two sacks of Tagovailoa. I was impressed with Ole Miss’ ability to apply pressure and flush the QB from the pocket. Also of note, the Rebels limited the Crimson Tide’s rushing attack to only 155 yards, led by Najee Harris with 71 yards on nine carries.

It was a serviceable day for Ole Miss punter Mac Brown, as he averaged 39.5 yards but had his first punt blocked on the season, resulting in a Crimson Tide score. Kicker Luke Logan connected on his only field-goal attempt of 33 yards. Ole Miss had nothing of substance in the return game.

The coverage units had a poor day, as Alabama had a punt return of 29 yards and a kick return of 36.

Ole Miss will host Vanderbilt in Oxford for a 7:30 p.m. kickoff on the SEC Network on Saturday. The Commodores (1-3, 0-2) are coming off their first win of the season, 24-18 over Northern Illinois in Nashville. While the Commodores are known for defense, they have been outscored 156-92 in only four games under head coach Derek Mason.

Ole Miss leads the all-time series against the Commodores 49-40-2.

“We focused on mental reps a lot this week, and getting the physical reps, has been a big difference for me. We are close to being a really great team, just need to get the little things right.” — Plumlee

“He (Tagovailoa) is very mobile in the pocket. We got after him, had some clean blitzers (and couldn’t finish). We just have to keep coaching them and keep working at it. We played relatively stout against the run but have to be better, play better in coverage.” — Ole Miss defensive coordinator Mike MacIntyre

TRENDING
58,148 READS
First and 10: It's not quite time to panic about Bryce Young, but Alabama has reasons to be nervous
51,772 READS
Smokey Greys are back: Fans react to Tennessee alternate uniforms returning for LSU game
23,016 READS
College football team reportedly to have several players sit out rest of season to preserve eligibility for transfer