10 bold predictions for Georgia vs. Alabama in the CFP title game

The CFP semis were a lot of fun, so let’s do it once more for the title game.

Last week, we were right about some things — the all-SEC matchup, UGA being behind early but rallying late, Sony Michel being a stud, Kelly Bryant not having enough gas to beat Bama … and wrong about some others — still waiting on Alabama’s kicking game to do something nice, and Oklahoma ran the ball quite well on Georgia.

This week, we’re going 10 for 10. At least until we don’t. But anyway, we’ll look boldly into the future again.

Here are 10 predictions for the CFP title game:

You could point out that Bama pretty much always strikes first. You wouldn’t be wrong. Plus, this is one team’s third CFP final in three years and the other’s first national title game in 37 years. If you think that won’t manifest itself in some early UGA jitters, I’d bet that you’re wrong. I see Bama getting into the end zone late in the first quarter to take the lead.

Once more on Nauta

Several times this season, I’ve expected UGA to get the ball to its big sophomore tight end. But UGA’s offense has been able to function quite effectively in a very conservative mode. That won’t be the case Monday.

And given the depth issues that Alabama has had at linebacker, some of those young backers will be vulnerable to a play-action throw down the seam to Isaac Nauta. I see him with 3 or 4 catches for 75ish yards and a third-quarter touchdown. He’s not the MVP, but he’s a big factor in this game.

All season long, I’ve talked about Damien Harris and how underrated he is. I wasn’t wrong, but a game like this is where Alabama goes deeply into its core identity. On third-and-1, the Tide want to hand the ball to the guy who can push the pile, and that’s Bo Scarbrough. A day with 75-100 yards rushing follows for Bo.

Unlike most of Georgia’s opponents, Alabama’s front will do a good enough job against the run to force Georgia into some definite passing situations.

When that happens, Katie bar the door, because Alabama can swing a game off a QB pressure. Or an injury. We boldly predicted that the Tide would knock out FSU QB Deondre Francois in the opener, and they did.

Georgia has allowed only 18 sacks this season. Can it keep Alabama to three or fewer? The guess is yes, but the Dogs haven’t seen heat quite like this.

Who can resist going back to a good thing? We’re guessing not Brian Daboll, as last week’s experiment with Da’Ron Payne as the biggest receiver in the world will be revisited. 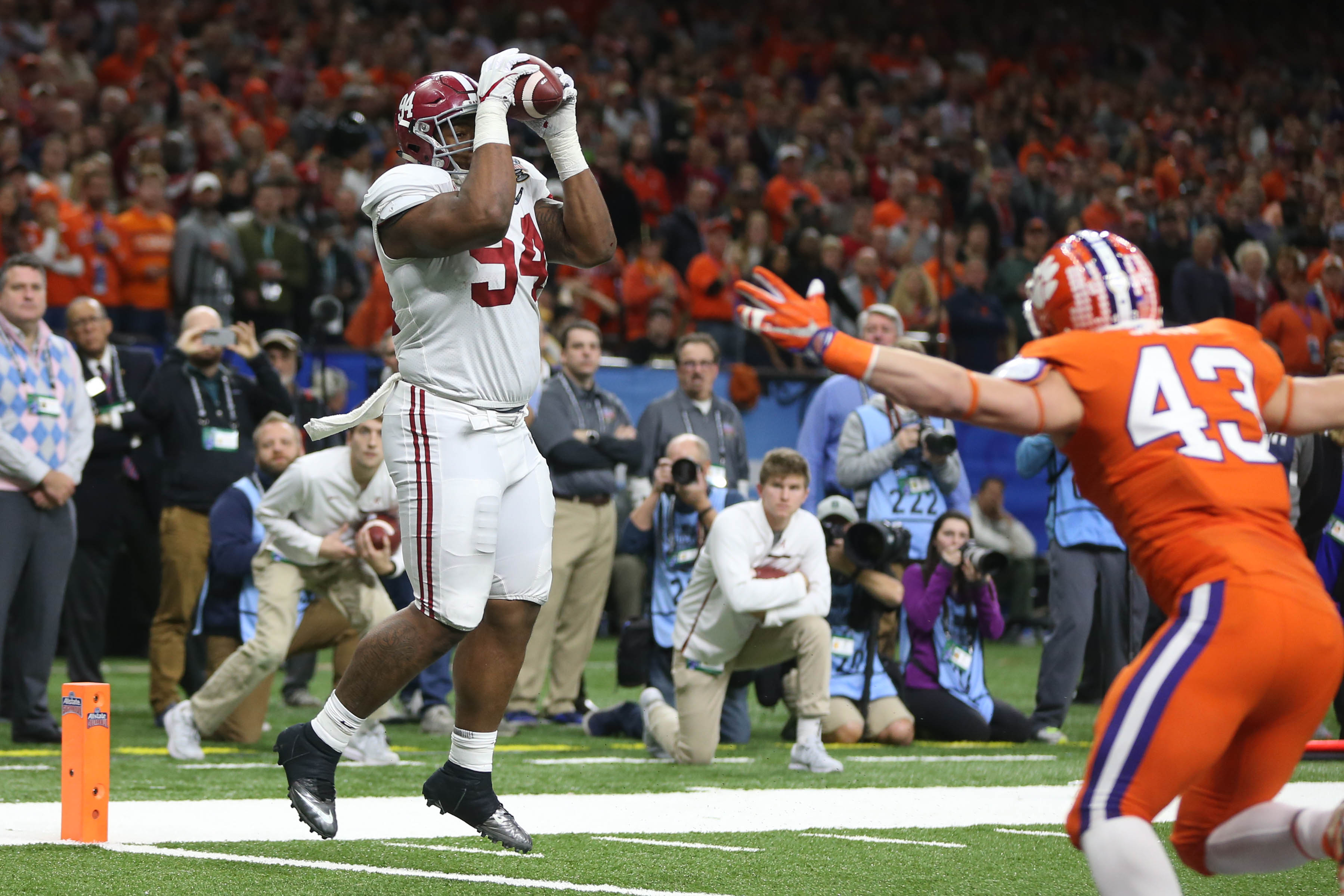 Against Clemson, Payne caught a touchdown pass (above) and returned an interception for a score. Not bad for a 6-foot-2, 308-pound defensive tackle who usually doesn’t stray far from the line of scrimmage or the center of the field.

This time, the larger-than-life Payne will be in the same formation, but will assume his inner Refrigerator Perry for a rushing score for the Tide. If Scarbrough is a big back, Payne might be the equivalent of two.

We were bullish on Roquan Smith last week (although who isn’t?), but this week the Georgia defender who leaps off the screen is Carter.

To beat the Crimson Tide, you have to get them out of their element. Carter is the rare specimen who is fast and strong enough to do so defensively. He will punish Jalen Hurts in the second half and could well be part of a turnover that swings momentum.

Alabama is never short on talent, but the rash of injuries has left the Tide a little short on experience, which is why Evans will shine especially bright.

Containing the edge on Georgia’s ground game is a must, and while UGA will win some snaps, Evans will finish his Alabama career with 10+ tackles and will help keep the Bulldogs under 200 yards rushing.

Like last week, we see the Bulldogs having some early struggles. You don’t end a stretch of nearly 40 years away from college football’s biggest stage and just shrug it off.

But Alabama’s two weaknesses that Georgia can exploit are relatively poor health, particularly defensively, and special-teams sloppiness. Given the number of weapons at Kirby Smart’s disposal, we see Georgia rallying late. Again.

Troubles in the Bama kicking game

Either Andy Pappanastos gets the yips again, or J.K. Scott shanks a punt badly, or something similar. But if Alabama wants to win this game, it has to avoid the exact kind of mistake I’m forecasting.

Hot Rod for the winner

Last year, the guy who scored the winning points was diminutive Clemson receiver Hunter Renfrow, and columnists everywhere presented the end game as a David vs. Goliath story.

Who would make a better David this time around than Rodrigo Blankenship, the big-legged sophomore who looks more like Buddy Holly than a college football hero?

Blankenship showed the ice water in his veins last week with a 55-yard field goal. This week, he wins the title with a late kick. UGA 31, Alabama 28.