A message to athletic departments: Stop using former players to promote programs they didn't play for

I’m writing this letter to you in hopes that you’ll refrain from an odd trend that’s we’ve been seeing in college football the past few years. That trend, in case you haven’t seen it, involves using former players to promote a coach’s level of success. On the surface, there’s nothing wrong with that. Of course coaches are going to promote the NFL players that they coached.

What’s the problem then?

Well, using former players to publicly promote programs that they didn’t attend isn’t right. At all. In fact, it basically confirms the slimy nature that many people believe college coaches operate with. That is, they’re all about chasing paychecks and players are just their means to doing so.

If they really were “all about the players” then surely they’d understand why the players weren’t fans of their likeness being used in images like this (via Sal Sunseri):

Maybe Sunseri, who is now Florida’s defensive line coach, didn’t realize that he’d offend people like former Florida State star Derrick Nnadi by posting his name in a Gators recruiting graphic. Sunseri did delete the tweet, but not before Nnadi had this kind of reaction:

Needless to say, social media enjoyed Nnadi dunking on Sunseri. That made far more of an impression than Sunseri’s original brag tweet (check out Nnadi’s likes and interactions compared to Sunseri’s).

That’s why I would caution you, college athletic department employee, not to make that same mistake. Not only does it not have the impact on recruits you hope it will, it offends the people who actually did play for those coaches. See how backward that is?

And Sunseri wasn’t the only one who was guilty of this. Last week, the Vols also tried rolled out the “recruited and developed” tweet for its new coaching staff with a bunch of non-Tennessee players:

If your a DB and want to be developed by the 2 best DB coaches then Tennessee is the place for you!

Obviously former Alabama defensive back Ronnie Harrison wasn’t too pleased to see his likeness used to promote a non-Alabama program.

Again, check out the massive difference in interaction between Harrison’s tweet and Biffani’s tweet. That doesn’t include the attention from national websites like us who wrote stories on Harrison and Nnadi standing up for themselves.

Isn’t the whole point of tweeting graphics like that so they’ll get positive attention and that recruits will see them? You, college athletic department employee, should know that as well as anyone. So basically, tweet that out at your own risk if you so choose. Just get ready to delete that tweet when a former player listed publicly complains about it.

But when you think about it, they should have the right to do that. Former players didn’t spend their college careers working their tails off for an NFL future just so another school could brag about their success.

Yes, I understand the fine print says “all of these players were developed by coach X.” I also understand that it doesn’t list where those players were developed. Call me crazy, but I don’t think it’s a coincidence that you can rarely find another school’s logo pictured in the images of the recent NFL draft picks (try to find an Alabama logo on Harrison and Anthony Averett). And I wonder why they went with black and white images across the board.

That’s the problem with all of this. It’s meant to twist facts. Is it factually correct to have that fine print disclaimer of what the graphic means? Sure, though as Harrison and Nnadi pointed out, “recruited” and “developed” are used pretty loosely on those graphics.

Former Florida State star Jalen Ramsey also pointed that out a couple months ago when Texas A&M tried to claim that Jimbo Fisher — an offensive-minded coach — was responsible his 2017 NFL earnings (that’s even a photoshopped Texas A&M logo for Fisher): 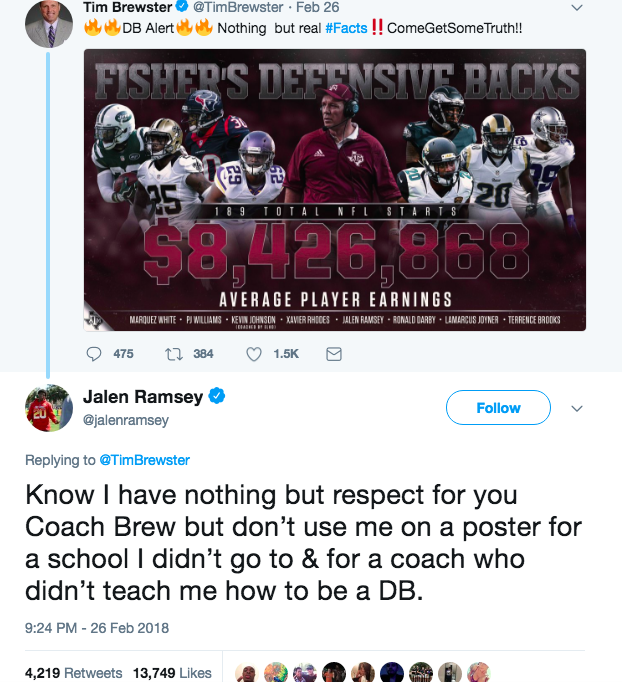 Again. Look at that interaction discrepancy.

So what’s the solution to the problem, you ask? After all, these coaches have to find ways to market themselves. Well, I have a few suggestions for you.

How about, if a team is going to use a former player’s likeness in a graphic like that, why not reach out to him and explain the context first?

That might not work for everyone, but at least they wouldn’t have the surprise of scrolling through their Twitter feed and seeing themselves on another school’s recruiting graphic. Just have the former coach shoot the guy a text for crying out loud. If you’re going to brag about how much money the coach made a player, he should at least be able to communicate about something like that.

Here’s another proposal that you might consider — don’t do them at all!

I already told you about the negative social media attention outweighing the positive. Besides, is a recruit really going to look at a graphic like that and commit to a school because of it? Doubtful.

I have no problem if a coach walks into a kid’s house and tells him how many NFL players he coached and how much money they’re all making. They should do that. Considering that the vast majority of Power 5 recruits have NFL goals in mind, that’s an obvious pitch.

What’s the difference between that and throwing up some graphic with that information? That’s coming from the mouth of a coach, not some Twitter account that’s used for promotional purposes for that school.

Think about this. If Tom Herman walked into the home of the nation’s top quarterback recruit, he’d obviously tell him, “hey, I was the one who helped turn third-string QB Cardale Jones into a national champion and an NFL Draft pick.” I’m sure Jones wouldn’t have a problem with that. What he would have a problem is a graphic with his NFL salary beside a picture of Herman in Texas gear with the Longhorn logo in the corner. Oh, and there would probably be some burnt orange filter all over it.

There’s a fine line between self promotion and over promotion. These graphics crossed that line.

If you and your fellow Power 5 athletic departments continue to promote these things, I can only hope for one thing. Not that you get the shares or audience reach you want.

Rather, that each former player you brag about uses their platform to dunk all over you.

Someone you won’t use in a recruiting graphic anytime soon