While Texas took home the individual crown, the SEC put together a banner year across the conference to win the conference award for most teams in the top 25 of the final Learfield IMG College Directors’ Cup.

The SEC had Florida (5), Alabama (7), Arkansas (8) and Georgia (10) in the top 10, and eight institutions finishing in the top 25. The Gators were powered by the men’s tennis title and also had six additional top-five finishes, including women’s volleyball, women’s gymnastics, men’s swimming and diving, men’s indoor and outdoor track & field and women’s lacrosse.

The Longhorns took home three national championships – men’s swimming and diving and both women’s rowing and women’s tennis – and a runner-up finish in women’s volleyball.

Alabama, meanwhile, had its best-ever finish. With a College Football Playoff National Championship and SEC championships in football, men’s basketball, gymnastics and softball, the Crimson Tide finished seventh. Alabama’s previous best was 14th at the conclusion of the 2017-18 campaign.

Here are the top 30 standings: 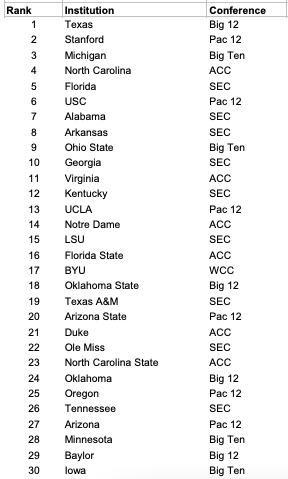