We bring you the best of sad fan shots from the weekend of college football. Be sure to tweet the best ones as they happen on Saturdays to @SDS. This week, we bring you a special Championship Saturday edition.

Woah woah woah. So let me get this straight. You made the trip to Atlanta and took the time to spell this out in the school colors and hold this up even though your school reached the SEC Championship Game with a first-year coach? That’s sad. Very sad.

Woah woah woah. That’s what this guy is saying. He’s probably reacting to the fans in the first picture, and he wants answers.

Whoa! Florida fan has some eyebrows. Even his eyebrows can do the gator chop pic.twitter.com/eGTT8EnTcs

I had to show this one because it may be the only time in my lifetime that anyone involved with the Ohio State program declares themselves a Florida fan for any period of time. Brutus wasn’t a sad fan here … not yet, anyways. Florida went on to lose to Alabama 29-15. 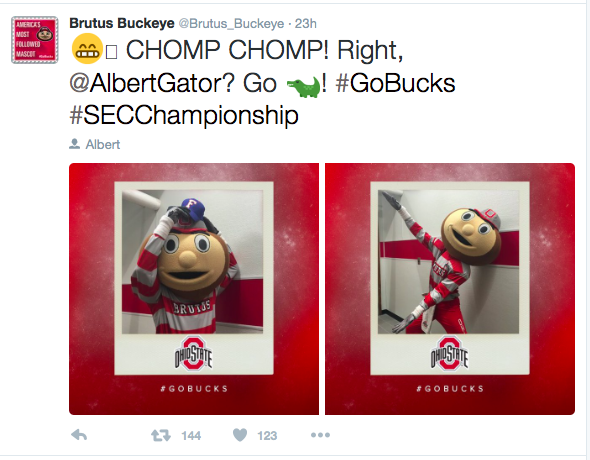 There was plenty of drama in the Spartans’ 16-13 win over the Hawkeyes in the Big Ten Championship Game. Here’s a shot of a few MSU fans that were crushed after Iowa’s 85-yard TD to go up 13-9 near the start of the fourth quarter.

Of course, Michigan State was in the middle of putting together an incredible drive to try to take the lead. That means it’s time to stroke the beard.

The Spartans finished off the amazing 22-play, 82-yard TD drive that spanned 9:04 to go ahead for good with just 27 seconds left. Of course, that led to the most common sad fan reaction: the Surrender Cobra.

Turned into an Iowa fan pic.twitter.com/OpVxYLT5Nd

In the ACC Championship Game, it was a lonely world for the few Tar Heels fans in this shot, which came after Artavis Scott’s 35-yard TD catch to give Clemson a 19-point lead over North Carolina in the third quarter. A late Tar Heels rally fell short in a 45-37 loss to the Tigers.

Sad Trojans fans were especially hard to track down this week in their 41-22 loss to Stanford in the Pac-12 Championship Game. However, as I’ve said before, you can’t hide from the sadness because it’ll find you. Once it does, it’ll let me know so I can show everyone else.