I wish every day was like a holiday. When you have a holiday week, there are sports on all day, not just during prime time on the East Coast.

When you have a holiday week, there are tournaments galore in college basketball, special NFL games, college football bowl games, etc. It’s awesome to have sports on whenever you want them, all day, every day.

I can’t wait to go home to Illinois next week and watch sports all week with my dad. Anyway, here are your questions for this week’s Mailbag:

As great as some of these marching band performances are, I absolutely love watching the Dr. Pepper ball toss. It’s just so mesmerizing watching people throw footballs at giant Dr. Pepper cans, even if they often use a chest pass instead of throwing it like a real football.

I’d like the rules to change so you have to throw it like a football, though. If you want to have a competition where the participants can chest pass, bring this same promotion to the NCAA Tournament and use basketballs.

If it’s going to be on a football field, you should have to behave as such. But I’ll still take the Dr. Pepper Challenge over a random pop act any day.

Will Joe Burrow be a unanimous Heisman winner?

USC running back Reggie Bush was the closest we’ve ever had to a unanimous Heisman winner, garnering 91.77 percent of the votes in 2005. Oh, wait, scratch that — Bush had to vacate the Heisman, so we’ve all forgotten that he won, right?

• Burrow’s journey to Heisman stage was meant to be

I do think Burrow will set a new record and get at least 92 percent of the first-place votes, but I wouldn’t expect him to be the unanimous pick. Certain media types are always going to be contrarian, if only so they can write columns like “Why Jake Fromm was the real Heisman winner” or something equally ludicrous.

Still, it should be a landslide victory for Burrow, even though Chase Young, Justin Fields and Jalen Hurts all had truly amazing years, too. 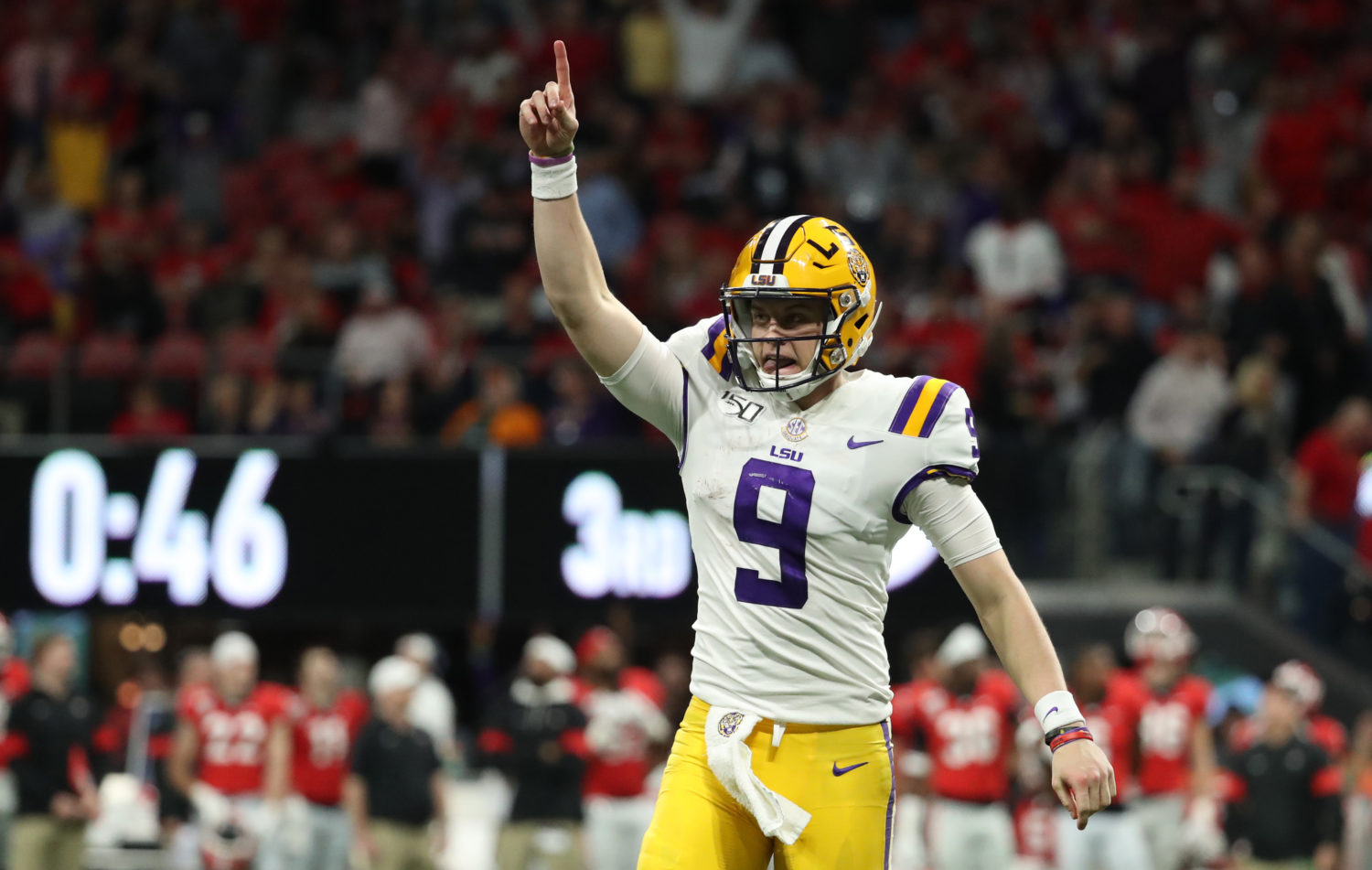 It won’t be unanimous, but Joe Burrow will win the Heisman in a landslide. Photo by: Jason Getz-USA TODAY Sports

I get that head-to-head results matter, but Florida’s losses have been A) close, B) with significant injuries and C) to top-5 opponents. Georgia’s losses have been embarrassing. How did UGA only drop 1 spot? I was looking forward to seeing Kyle Trask throw against a Big 12 defense.

Well, I think you answered your own question there. Head-to-head results do matter to the College Football Playoff committee, which is why Georgia remains ahead of Florida and Auburn is one spot ahead of Alabama.

I agree that Florida’s loss to LSU was much better than Georgia’s loss to South Carolina, but you’re ignoring some key factors (also, Georgia was only ranked No. 8 when Florida lost to the Dawgs). Additionally, Georgia made it to the conference title game and lost. Florida didn’t. I think that factors into things, too.

Florida had 2 losses in 12 games, while Georgia had 2 losses in 13. Yes, Georgia’s loss was much worse than either of Florida’s, but that’s where the head-to-head record factors in. I have no problem with Georgia being No. 5 and Florida being No. 9, though I think I’d have the Gators more in the 7-8 range, personally.

What do you think you’d be most able to do in a halftime contest? Make an NFL-distance extra point or sink a half-court shot?

Well, that really depends on whether it’s a one-time opportunity or a running clock. If I only had one shot, I’d almost certainly miss the half-court attempt. If I could have 30 seconds, though, I’m fairly confident I could make one.

If I could only get one attempt, though, I’d go with the extra point. I know 33 yards is no joke (even NFL kickers miss them on occasion), but it does seem like the higher-percentage try.

If we’re being real, though, there’s no way I could accomplish either if I only had one attempt. Now, if we’re talking college extra points, I’m probably more accurate than any Alabama kicker of the Nick Saban era. (Too soon?)

BONUS: Dobbe’s Locks of the Week went a perfect 3-0 last week, greatly aiding his quest to get back to .500. Here’s his pick for the Army-Navy game: