Down season or not, SEC still best conference in America for 2016

A popular narrative that came out of the 2016 college football regular season was the SEC having what appeared to be a “down” year.

Aside from Alabama, which is the only unbeaten team in the Power 5, the rest of the conference has lagged behind significantly. The Crimson Tide crushed Florida in the SEC title game, giving every other club in the league at least four losses.

The East in particular continues to hold back the conference’s potential as a whole. Only one squad managed to do better than .500 in conference play — the Gators were 6-2 — and five of the seven gave up more points than they scored. Vanderbilt was dead even on the JumboTron in eight games with 162 points both for and against.

Don’t blame the Tide for the imbalance. They only played Florida, Tennessee and Kentucky. Georgia, Missouri, South Carolina and Vandy were spared.

In the West, while ‘Bama ran roughshod over its divisional foes, Auburn and LSU still posted a 5-3 mark in the league. Four of the seven programs scored more points than they allowed, which includes 4-4 Texas A&M.

Nevertheless, Alabama has been so dominant from start to finish this year that the other 13 teams in the SEC have been criticized for failing to put up more of a fight. Not only were the Crimson Tide 8-0 in conference, but they scored more points — 17 more than Tennessee — and surrendered fewer — five less than Florida — than anyone.

No question about it, the conference can be described as ‘Bama and everybody else this season. The Tide have been that good.

That being said, when comparing all the Power 5 leagues in terms of how they’ve done against ranked competition, the SEC still comes out on top. And it’s not necessarily Nick Saban and Co. propping up the other 13. 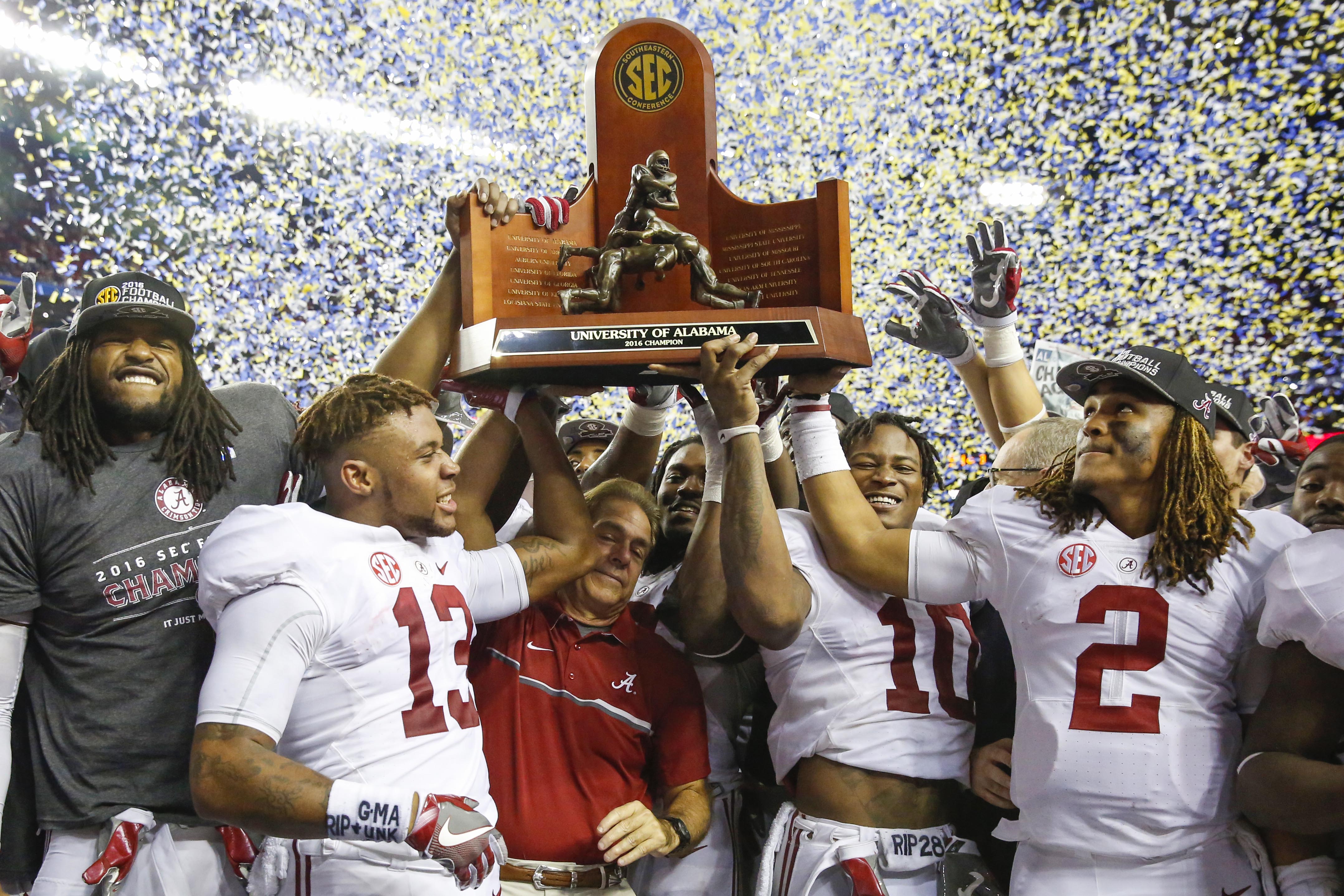 The SEC has played 55 games against teams currently ranked in the AP Top 25 — many of which came against each other, of course — and have an overall record of 17-38. That’s a winning percentage of .309, which is the best among Power 5 conferences. While the East was only 6-18, the West was a much more admirable 11-20.

The ACC is second with a winning percentage of .303. But at 10-23, that’s significantly fewer times wrestling with quality opponents.

Just like the SEC is anchored by Alabama, the ACC is buoyed by Clemson. The Tigers are 4-1 against the Top 25, meaning the rest of the conference only has six wins combined over ranked teams. Pitt has two, including one over Clemson.

People arguing against the SEC in 2016 are likely arguing in favor of the Big Ten, which currently features Ohio State, Penn State, Michigan and Wisconsin all in the Top 8. If the SEC West isn’t the toughest division in the land, then the Big Ten East — the Buckeyes, Nittany Lions and Wolverines are a combined 32-5 — certainly is.

SEC haters accuse the league of being top-heavy, especially this year considering what the Crimson Tide have done through 13 games.

However, the Big Ten clearly isn’t as stable from top to bottom as the SEC this season. Even with Ohio State, Penn State, Michigan and Wisconsin all winning double-digit contests, the league is only 15-41 overall against ranked teams.

That’s a winning percentage of just .268. Even more alarming, those 15 wins were delivered by only five teams — the aforementioned four heavyweights plus Iowa, which was 2-2. The other nine clubs in the conference (Illinois, Indiana, Maryland, Michigan State, Minnesota, Nebraska, Northwestern, Purdue and Rutgers) all came up empty.

Meanwhile, 13 of the 14 teams in the SEC have defeated at least one ranked opponent. Only Missouri went 0-fer the Top 25.

The Pac-12, which was almost discarded on the cutting-room floor by the College Football Playoff committee for the second season in a row, snuck conference champ Washington into the Peach Bowl against Alabama as the No. 4 seed. 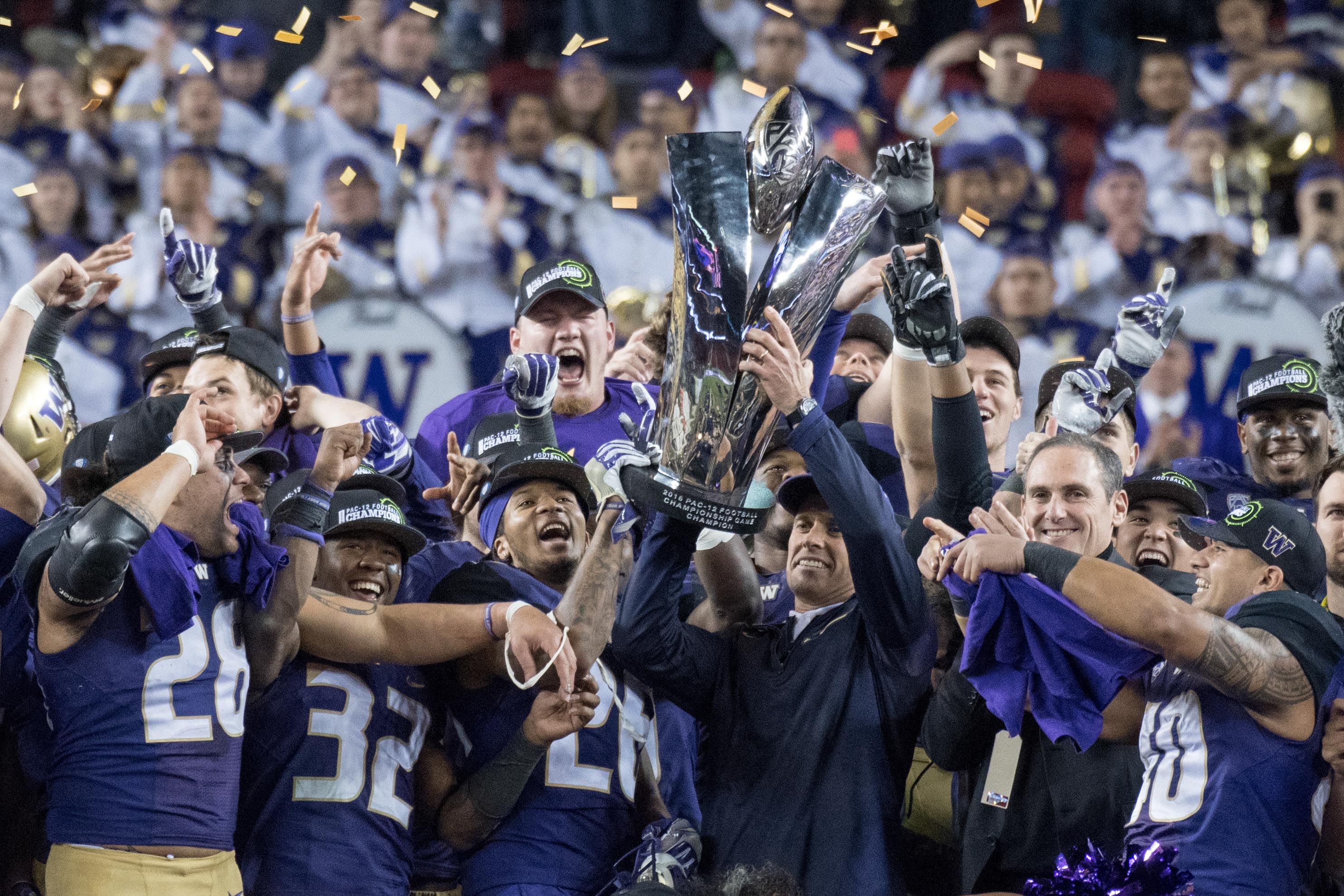 The Huskies are an unimpressive 2-1 facing the Top 25. Overall, the league is 9-42 against the Top 25, which is an anemic winning percentage of .176. USC is the only other squad to notch more than one win over a ranked opponent — one of them was a W over U-Dub — while four clubs (Arizona, Arizona State, Oregon State and UCLA) were each 0-5.

That leaves the Big 12, currently the red-headed step-child of the Power 5 with only 10 teams and no conference championship game.

Oklahoma won the league and finished the regular season on a nine-game winning streak, although it wasn’t enough to get an invite to the Final Four. The Sooners toppled Oklahoma State on Dec. 3 in what was a de facto title game.

Both OU and OSU are 2-1 against the Top 25 this year — the Cowboys’ lone L is to its in-state rival. But outside of the Sooner State, the rest of the Big 12 is an atrocious 1-23 when matched up against ranked teams. Baylor is 1-2. Iowa State, Kansas, Kansas State, TCU, Texas, Texas Tech and West Virginia are a combined 0-21.

By no stretch of the imagination was it a memorable campaign for the SEC. Alabama has resembled a runaway freight train that only seemed to gain more momentum as the calendar flipped from September to December.

In the East, Tennessee ran out of bricks. Florida turned out to be a fraud — for the second season in a row, as a matter of fact. Georgia struggled in Year 1 under Kirby Smart. In the West, LSU got off to a slow start. Texas A&M fizzled down the stretch. Auburn righted the ship midseason but then got bitten by the injury bug.