SEC created division format. As East-West gap widens, here's why it must get rid of them

This year marked the 25th edition of the SEC Championship Game, and arguably the worst: Alabama demolished Florida 54-16, covering a 24-point spread with anticlimactic ease. The blowout felt inevitable, extending the West Division’s championship winning streak over the East to eight straight, seven of them by at least two touchdowns. It also dropped the East’s record against the West this season to 4-11, and to 20-48 in the five years since the SEC expanded to 14 teams.

Because the SEC pioneered the format, in 1992, this year was also the 25th anniversary of the basic concept of intra-conference divisions in college football, and the results across the country didn’t exactly offer a ringing endorsement for it, either.

In the Big Ten, the conference produced two top-five teams at the end of November for the first time in a decade, then staged a championship game on the first Saturday of December that didn’t feature either one of them; Penn State claimed the title, but Ohio State — technically the runner-up in the B1G East — punched its ticket to the playoff while watching on TV like the rest of us.

The Pac-12 Championship excluded the conference’s best team at the end of the regular season, USC, despite an eight-game winning streak that included wins over both of the participants, Colorado and Washington. (Colorado also benefitted enormously as one of the two South Division teams that didn’t have to play the Huskies in the regular season; judging from the 31-point margin in the championship, the Buffs wouldn’t have been there if they had.)

The ACC title game left Louisville and Florida State at home while a lower-ranked team, Virginia Tech, was dispatched by a Clemson outfit that UL and FSU both took to the final gun.

Collectively, those games also echoed the lopsided divide in the SEC, marking the third consecutive championship win for the Big Ten East over the West, the sixth consecutive for the Pac-12 North over the South, and the sixth straight for the ACC Atlantic over the Coastal.

Meanwhile, the Big 12 — the only major conference without divisions or an official championship game, for the time being — again managed to be the only one that actually staged a de facto championship between clearly its two best teams: For the second year in a row the regularly-scheduled Bedlam match between Oklahoma and Oklahoma State turned out to be a winner-take-all collision between rivals sitting atop the Big 12 standings after navigating identical, round-robin conference schedules to that point.

Which brings us to the big question: Are divisions in college football still a good idea? For that matter, were they ever a good idea? Conference expansion has entrenched the two-division setup as a standard format for dealing with the sprawl of 12- and 14-team lineups, especially in the SEC, which has grown and thrived around the East-West breakdown for a generation.

Historically speaking, though, the concept is relatively young, and the larger conferences grow the more the seams start to show. Among the most obvious drawbacks: Imbalanced schedules, long layoffs in certain cross-division series — under the current arrangement, SEC teams in opposite divisions can go as long as seven years between meetings — and lopsided championship matchups that regularly exclude one or (in the Big Ten’s case) both of the league’s two best teams. When one side dominates the other to the extent that the SEC West has the East, maybe it’s time to start asking if there’s a better idea.

By far the best model I’ve come across for eliminating divisions, and one I enthusiastically endorse, was laid out last summer in a series of posts by SB Nation’s Bill Connelly and Jason Kirk. Under their plan, each conference would have to organize itself a little differently based on the number of teams in the league and the number of conference games on the schedule, but they could all follow the same basic premise.

In the SEC, for example, Connelly and Kirk proposed that each team would trade its six division games under the current format for three permanent, protected rivalry games that it would play every year. That would look something like this (these are my own suggestions, not theirs, but you get the gist):


There are sure to be some quibbles with that lineup, given the exclusion of games like Tennessee/Georgia, Tennessee/Kentucky, LSU/Florida, LSU/Arkansas, etc. from the annual rotation. But the most important rivalries are preserved: The Iron Bowl, Egg Bowl, Cocktail Party, and Third Saturday in October aren’t going anywhere. They’ll serve as the foundation for the rest of the schedule.

Now, in an eight-game conference slate, that leaves 10 teams to fill the remaining five dates in a pair of two-year, home-and-home cycles. (Connelly and Kirk suggest alternating the cycles between odd years and even years; I prefer keeping the home-and-home dates in consecutive years. Again, a minor distinction.) So the full schedule would look something like this, with the second cycle replacing the first every two years and vice versa: 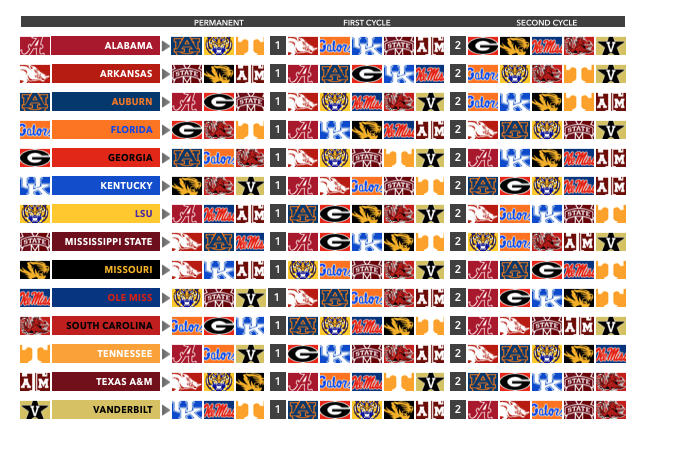 Beyond preserving (most) traditional rivalries, the beauty of this setup is threefold:

1. Each team plays every other team twice in a four-year cycle. Every player who signs out of high school and stays all four years would make at least one visit to every stadium in the conference, which they can’t say now. Five full years into its SEC tenure Texas A&M has yet to play Georgia or Kentucky.

2. The schedules are balanced. Like, very balanced. It’s impossible to account for the annual fluctuations of who’s up and who’s down in a given year, but if you look closely it’s safe to say that no team in this scenario is getting off light. I deliberately split up the league’s best two programs over the past decade, Alabama and LSU, so that they never fall in the same cycle; one or the other will appear on every team’s schedule every year, but (except for the schools with permanent rivalries vs. Bama or LSU) never both of them. I also split up games against Florida and Georgia, Ole Miss and Mississippi State, and Kentucky and Vanderbilt along the same lines. Based on historical success, the variations in strength of schedule are minuscule.

3. It produces the best possible championship matchup. The two teams that emerge with the best records against such evenly matched schedules should be pretty clearly the best two, no questions asked. Would you be interested in an SEC title game that’s actually, ya know, interesting?

I can only think of one real drawback to this system, and under certain circumstances it could be a big one: If the top two teams in a given year close the season in a rivalry game — I’m thinking specifically of Alabama and Auburn, but it could also apply to LSU and Texas A&M or any other year-end clash — the prospect of a quick-turnaround rematch in the Georgia Dome could significantly diminish the stakes.

(This would have been a problem for the Big 12 if it had a championship game in place the past two years, when Oklahoma’s resounding victories over OSU on the final Saturday of the regular season settled the question beyond any doubt; in both cases, the Sooners and Cowboys would have just played again in the title game anyway, rendering the first game basically irrelevant. That worst-case scenario will definitely be on the league’s mind when it reinstates a championship game next year.)

Think about the 2013 Kick-Six game, for example, and how different it would have felt if Auburn had to follow up one of the most dramatic victories on record by facing the Crimson Tide again seven days later — if Bama had essentially been granted a mulligan to erase the impact of the Iron Bowl. At least with divisions any possibility of a rematch in the title game is mitigated by the uncertainty of the intervening weeks.

All things considered, though, the risk of enduring that specific scenario once every 10 or 15 years is vastly outweighed by the advantages: By scrapping the divisional format, the SEC (and every other league) can ensure more balance and diversity in its conference schedule, deliver a better product in its climactic game of the year, and do it without jeopardizing the rivalries fans care about the most. Tear down the wall, and let the conference be the best version of itself.