It’s safe to say that 2016 wasn’t a banner season at the game’s most important position in the SEC. Not by a long shot.

Tennessee’s Joshua Dobbs had the premier passer efficiency rating in the league (150.6), but he only placed 20th nationally. He was drafted Saturday by the Pittsburgh Steelers, so Rocky Top is hitting the reset button.

While the highest-rated returning starter in the conference is Austin Allen of Arkansas with a mark of 146, finishing 29th in America is far from notable. Sean White of Auburn (143.1) came in 33rd, although he likely won’t be the No. 1 this year on The Plains. Even Alabama’s Jalen Hurts (139.1) could do no better than 44th.

In addition to the Volunteers, we’re certain to see new starters under center at Florida and Texas A&M. The Gators and Aggies are two of many programs that have been held back recently due to poor play at QB.

Here are my quarterback rankings for the SEC now that spring practice is in the rearview mirror. A lot can happen between now and Week 1, though.

Hubenak, Starkel and Mond all struggled to some degree in the Aggies’ spring game, so not a lot of questions were answered.

Truth be told, Hubenak is a backup in the SEC and can’t be counted on to take A&M anywhere of note in 2017. Starkel is coming off a redshirt and has a year in the system under his belt, but his upside may be somewhat limited.

Even though he has the most talent, the true freshman Mond is also the greenest. Coach Kevin Sumlin has quite a dilemma to solve.

Credit Franks for having good numbers overall in the spring game, although he did miss a couple of throws in the red zone.

Competing with fellow redshirt freshman Kyle Trask for the starting job, Franks appears to be much more prepared to lead the Gators this season. One of last year’s starters, Luke Del Rio, doesn’t inspire much confidence in the fan base.

Consistency with his arm will be key for Franks. From the day he got there, Franks developed a reputation being wildly inaccurate at time.

With two years in the system, as opposed to just one for Jarrett Guarantano, Dormady is likely the leader in the clubhouse for QB1.

In was an abbreviated performance due to weather issues, but Dormady was a perfect 10-of-10 in the spring game and seemed cool, calm and collected in the pocket. His athleticism when scrambling may have been undersold, as well. 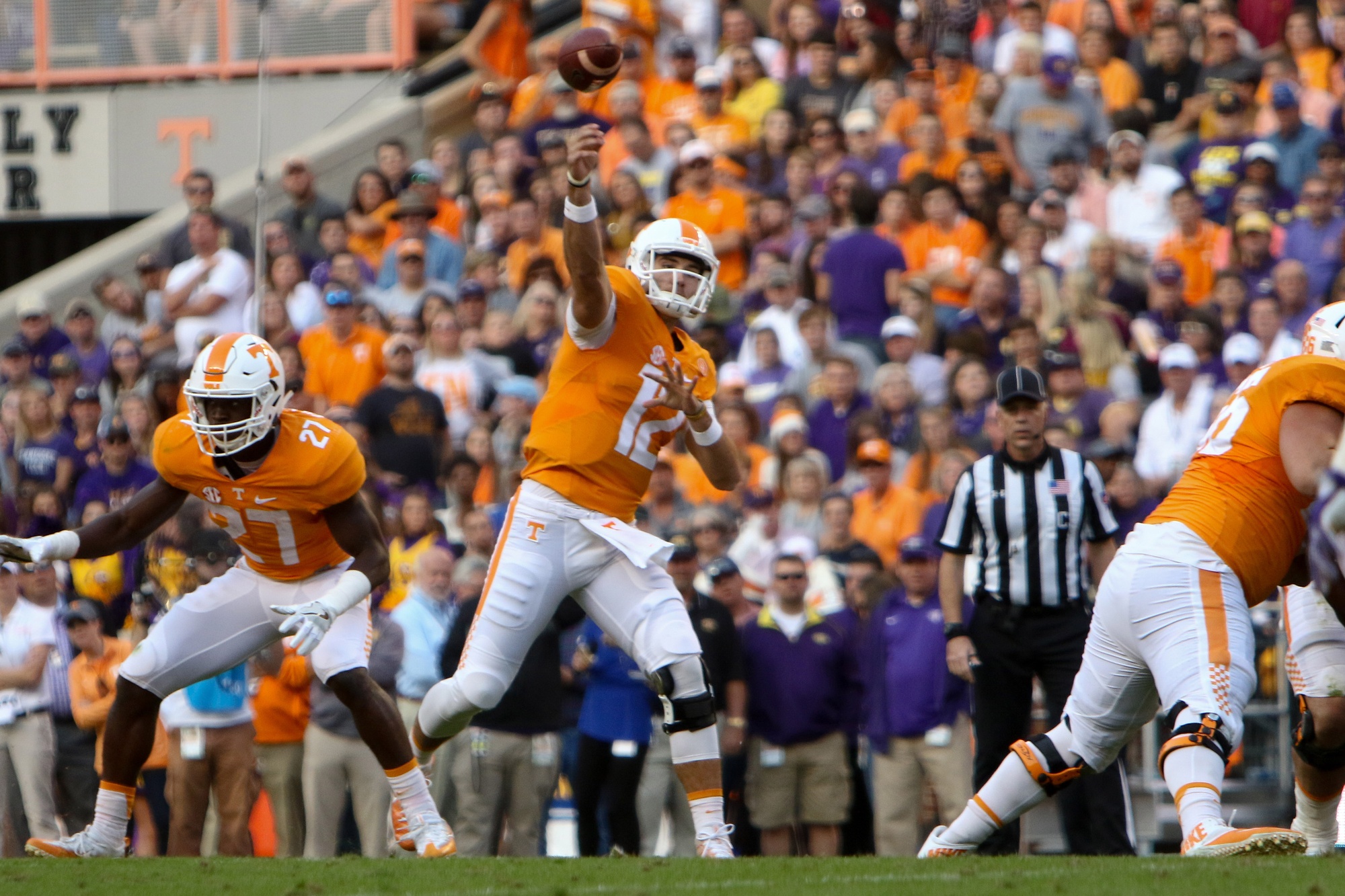 Nevertheless, one half of a meaningless spring game isn’t enough to vault him up this list. Check back in September, UT fans.

Stuck at the bottom of the rankings throughout most of 2016, Shurmur put a couple of solid outings together down the stretch.

That being said, Vandy still has a ways to go before being genuinely effective in the passing game. We know he can turn and hand the ball off to tailback Ralph Webb, but Shurmur needs to be able to keep that eighth defender out of the box.

While the Commodores held more of a practice than a spring game, Shurmur did deliver some pretty balls and put points on the board.

It has become apparent that Johnson has officially wrestled the starting job away from Drew Barker, who is yet to fully recover from a back injury.

Because Barker was held out of UK’s spring game as a precautionary measure, Johnson didn’t have to glance over his shoulder very much. He’s a mediocre passer, let’s be honest, although he does operate Eddie Gran’s offense rather efficiently.

Whatever the Wildcats get out of Johnson through the air is a bonus. Expect this team to run the rock both liberally and quickly.

After completing his first four passes in yet another Mother Nature-shortened spring game, Etling missed on his last nine and was intercepted once.

Credit the Tigers in the secondary, of course. Even with Jamal Adams and Tre’Davious White gone, there is never a shortage of DBs in Baton Rouge. Still, our first look at Matt Canada’s new system didn’t do Etling any favors.

Sure, all the shifts and motion hinted at a more modern scheme. But unless Etling throws it better, what’s the difference?

Don’t be fooled by Lock’s season totals from a year ago. He racked up a lot of yards and TDs in blowouts against inferior competition.

In conference play, Lock underwhelmed more often than not. Mizzou was so concerned with running the offense as fast as possible under new coordinator Josh Heupel that sometimes it forgot to run it effectively. It was speed for speed’s sake. 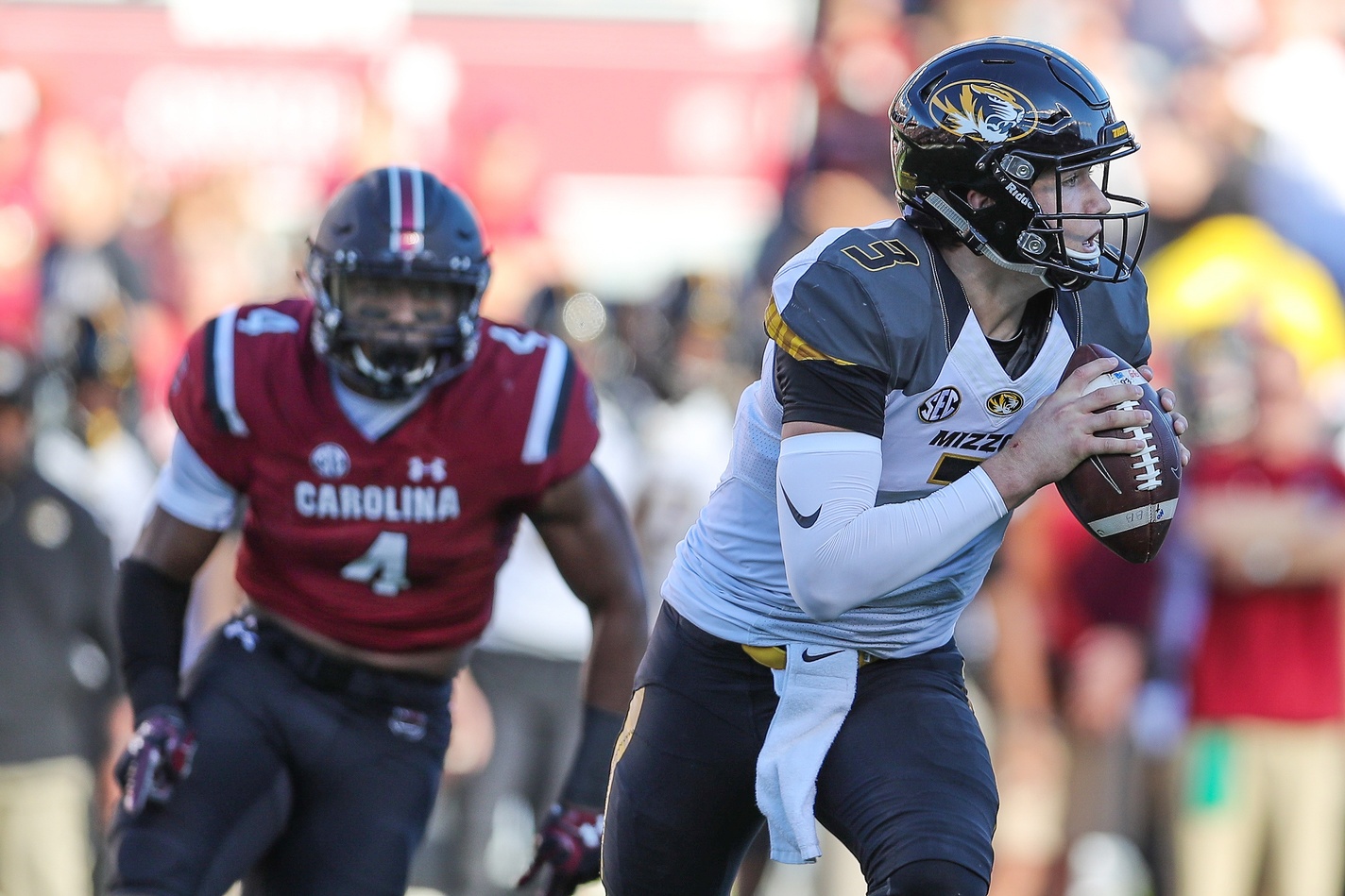 Lock is oozing with tools, don’t get me wrong. He has the ability to be one of the league’s top passers. The Tigers just need a better plan.

Speaking of tools, if Eason ever realizes his full potential at UGA, then he’s on the short list for No. 1 overall in the 2019 NFL Draft.

However, he experienced more downs than ups last year straight out of high school. Eason’s game-winner at Missouri and should-have-been game-winner vs. Tennessee were incredible. There simply weren’t enough highlights like that, though.

True, he needs more reliable receivers and a sturdier offensive line. But Eason has plenty of room to improve his own game, as well.

Had Fitzgerald not played so poorly in the spring game, he might be higher on this list. But he was atrocious with a quartet of INTs.

To be fair, a spring game is a terrible format for a signal caller like Fitzgerald. Half of what he does is devastate defenses with his strong legs, which can’t be simulated when defenders are essentially playing two-hand-touch.

Bulldogs coach Dan Mullen transformed Dak Prescott from a good passer into a great one. It remains to be seen if he can do the same with Fitzgerald.

The Gamecocks finally came to life offensively in 2016 when Bentley took over for the failed duo of Perry Orth and Brandon McIlwain.

If the spring game is any indication, Bentley could be at the controls of a sneaky juggernaut. Not only did he throw the ball beautifully, but he was aided by multiple backs, receivers and tight ends that made plays around him.

Protection will be big, naturally. If the ‘Cocks can keep Bentley upright, look out in Columbia. There’s a lot to like there.

Unlike the aforementioned Franks and Dormady, new starters who have to work their way up due to inexperience, Stidham debuts justifiably high.

Before sitting out this past year, he was quite productive at Baylor in 2015 after Seth Russell was sidelined with an injury. It was only after Stidham also went down that the Bears couldn’t throw the ball anymore. 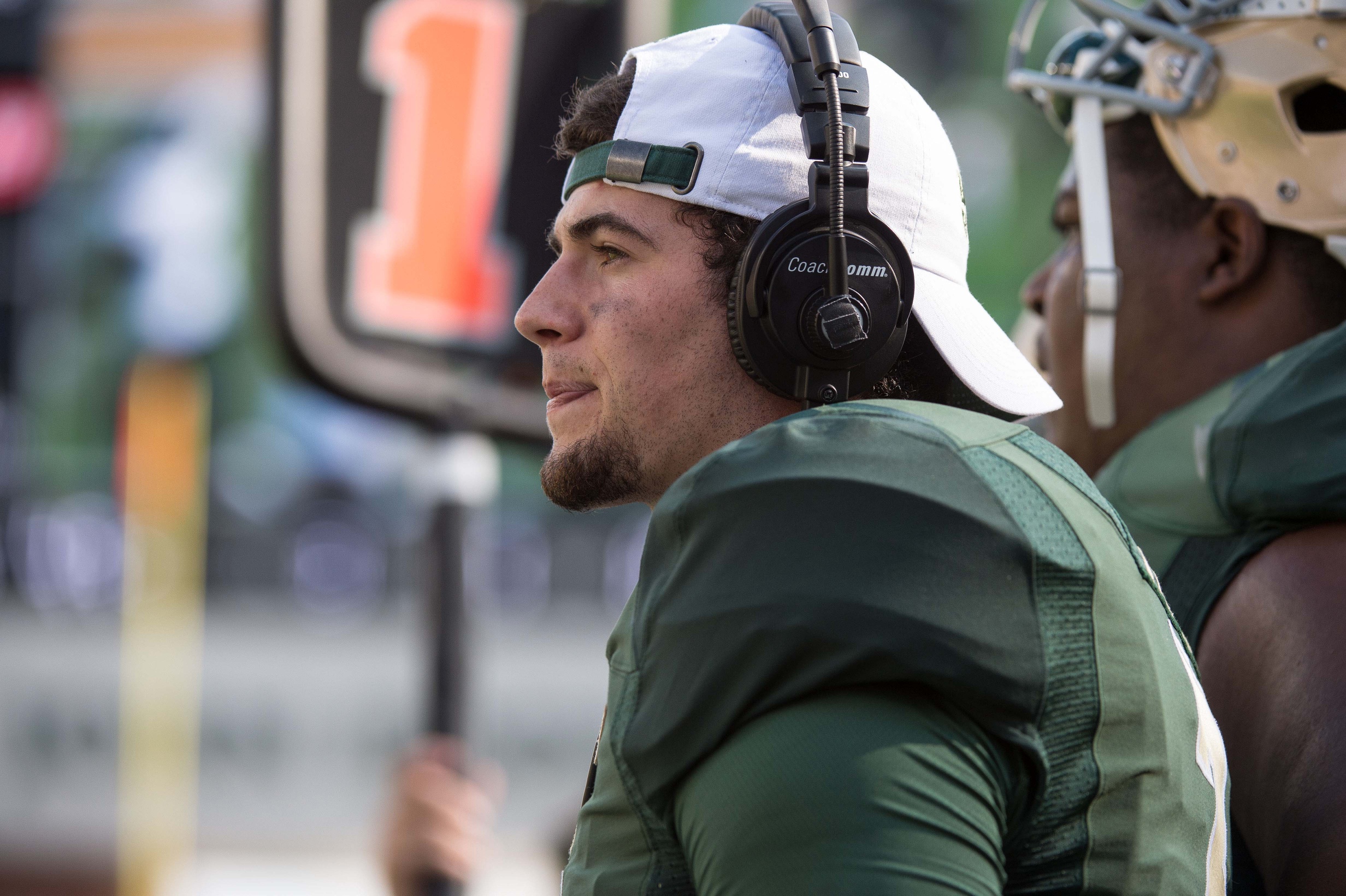 No question about it, Stidham was the talk of the spring game at Jordan-Hare Stadium. He’s the wild card in the West for 2017.

Perhaps nobody was more electric through the air in his spring game than Patterson, who was 20-of-31 for 341 yards and a pair of scores.

Even with Quincy Adeboyejo, Evan Engram and Damore’ea Stringfellow no longer in Oxford, Patterson has an embarrassment of riches when it comes to receiving options. The recipe is there for him to spread it around evenly.

Remember, it was Patterson, not Eason, who was the No. 1 field general recruit in the land for 2016. Look for some monster numbers from him.

Maybe the league’s best pure passer last year, Allen was one of the SEC’s pleasant surprises with his touch and toughness.

If Hogs coach Bret Bielema has anything to say about it, we won’t have to see just how tough Allen is again this season. He took a pounding week in and week out behind an offensive line that was leaky in pass protection.

He’ll have to get used to new targets, as four of his top five receivers from 2016 are history. Allen should be able to elevate their play, though.

The conference’s Offensive Player of the Year from a season ago was only a freshman. Hurts is back for more with the Crimson Tide.

Absolutely, early enrollee Tua Tagovailoa opened so many eyes with the way he threw the ball in the spring game. But coach Nick Saban put an end to the speculation: Hurts is the starter. There is no quarterback competition in Tuscaloosa.

We know Hurts is a gifted runner. Should he improve with his arm, he has enough 4- and 5-star studs around him to be truly unstoppable.