Texas fans were thrilled this offseason when the Longhorns kicked coach Charlie Strong to the curb and brought in highly touted Houston coach Tom Herman.

However, the honeymoon is already over in the wake of Texas’s disappointing 51-41 home loss to Maryland on Saturday afternoon.

When Austin American-Statesman beat reporter Brian Davis opened up his Longhorn mailbag on Sunday morning, he was greeted with a slew of not-so-nice messages about the new coach: 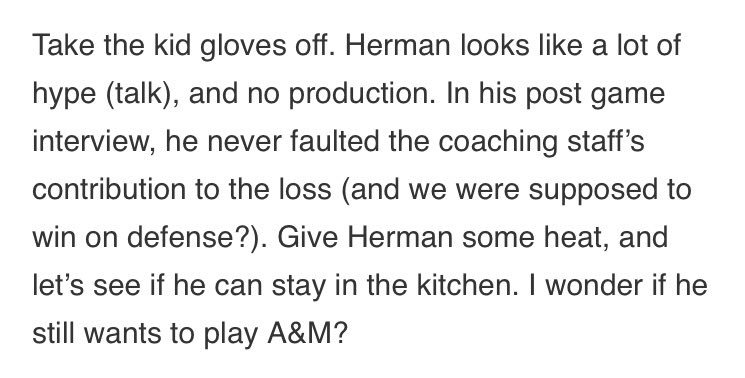 The Longhorns take on San Jose State next week, so they should have a chance to right the ship a bit and maybe take some heat off of Herman.

However, in Week 3, the Horns head to Los Angeles to take on QB Sam Darnold and the USC Trojans, so this season may get a whole lot uglier before it gets any better.

Davis’s weekly mailbag will be something to watch as the 2017 campaign marches on.

TRENDING
129,712 READS
Report: College football expected to be canceled this week
79,570 READS
Report: Big Ten cancels its upcoming football season
61,566 READS
During a chaotic day of college football, SEC commissioner Greg Sankey releases a statement
LATEST NEWS
View All
40 minutes ago
Eli Drinkwitz has no issue adding Alabama and LSU to Mizzou's schedule: 'I came to Missouri to play against the best'
1 hour ago
Eli Drinkwitz praises the SEC's leadership, says the league's plan is to play the upcoming fall season
2 hours ago
Ed Orgeron on current status of football this fall: 'There is no plan B here at LSU, we are going forward'
2 hours ago
Anchor Down on campus? Vanderbilt requiring students to stay in Nashville and not travel on weekend trips through November
3 hours ago
Big Ten already suffering in recruiting: League coach claims prospect told him he plans to go to conference that 'supports football'
3 hours ago
Independent FBS program becomes the latest to cancel its 2020 college football season
VIEW MORE

RECENT ARTICLES
SEC
What if I told you the biggest threat to playing football in 2020 is not coronavirus?
SEC
Big Ten already suffering in recruiting: League coach claims prospect told him he plans to go to conference that 'supports football'
SEC
Independent FBS program becomes the latest to cancel its 2020 college football season
SEC
Greg Sankey addresses the possibility of the SEC adding teams for the coming college football season
PRESENTED BY