The confetti has just been swept up in Miami following Alabama’s latest national championship. So there’s no time to waste before looking ahead to next season.

ESPN was one of several media outlets to release its “Way-Too-Early Top 25” ahead of the 2021 season as writer Mark Schlabach explained some of the main storylines entering the season.

“Will we finally see those heavyweights fall back in 2021? Clemson star quarterback Trevor Lawrence has already declared for the NFL draft. Will Alabama’s Mac Jones and Ohio State’s Justin Fields be next? Will it be enough for programs such as Georgia, North Carolina and Texas A&M to close the gap on teams that have dominated their conferences for much of the past decade?”

For Alabama, Schlabach noted, “the Crimson Tide are more than likely going to lose a slew of players to the NFL draft, including potential first-rounders Jones, Smith, Waddle, Surtain and Harris. Perhaps no program has assembled as much talent as Alabama, however, and coach Nick Saban has capable replacements ready to go.” 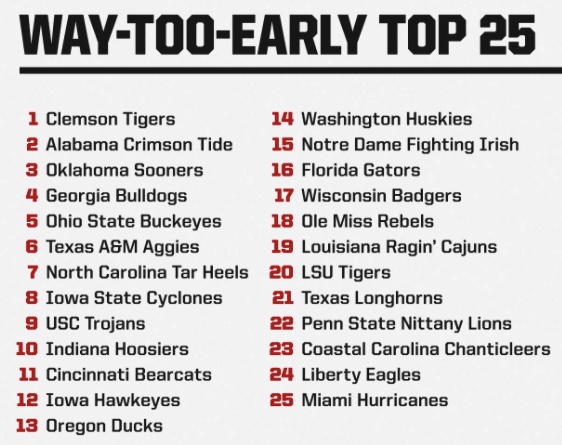