Even if Florida stumbles, no reason to believe Tennessee can capitalize

Tennessee wasn’t supposed to make it through that month-long gauntlet unscathed. That would’ve been too much to ask.

The Volunteers had one of the hardest four-game stretches of the season in all of college football. Weeks 4-7 featured Florida at home, Georgia on the road, Texas A&M on the road and then Alabama at home.

When the dust settled, UT went a respectable 2-2. The Vols handled themselves against the Gators and Bulldogs in come-from-behind fashion, but another comeback against the Aggies came up short. By the time ‘Bama rolled into Knoxville, they had nothing left — physically, emotionally … you name it — and got destroyed.

Sitting at 5-2, coach Butch Jones still appeared to be in good shape. With a little help, winning out meant winning the East.

The rest of Tennessee’s conference slate seemed more than manageable. There wasn’t a team in the league that had it as easy as at South Carolina, Kentucky at home, Missouri at home and then at Vanderbilt to close out 2016.

The aforementioned Gators — strong on defense but weak on offense — were more than likely going to get tripped up in the stretch run at some point. A game ahead of the Volunteers in the division, they still had a neutral-site affair with Georgia, a home date with South Carolina plus road trips to Arkansas and LSU.

Due to the fact that it owned the head-to-head tiebreaker, UT simply had to take care of business and then wait for UF to fall.

Well, that plan is already up in smoke. While the Gators put the Bulldogs to bed in the World’s Largest Outdoor Cocktail Party, the Vols resembled their pre-bye week selves and inexplicably lost to the Gamecocks. 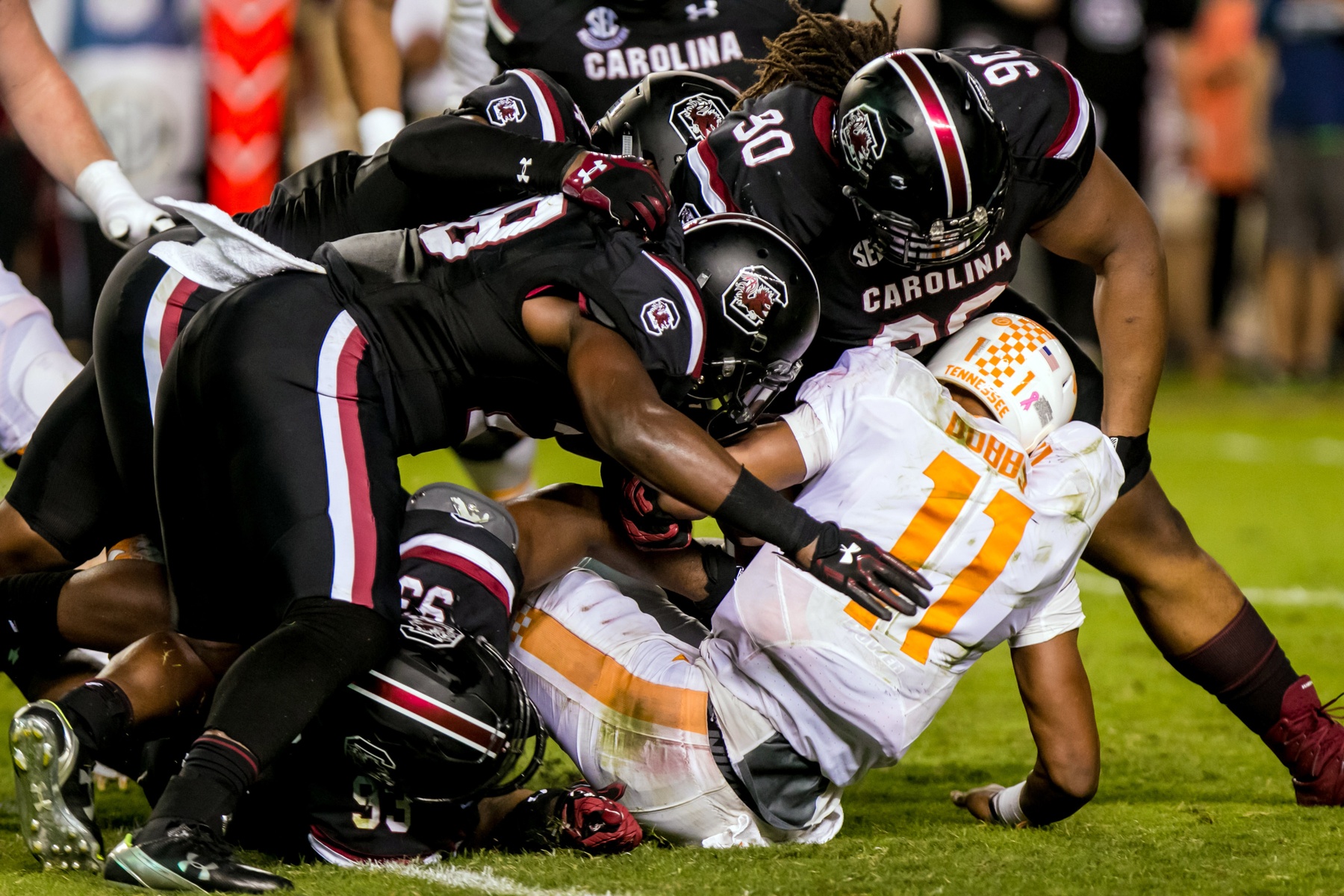 Their most high-profile player, quarterback Joshua Dobbs (above), put together another head-scratching performance facing an average-at-best South Carolina defense. Completing only 12-of-26 passes for 161 yards and 1 touchdown, he added to his SEC lead with 2 more interceptions — he’s up to 11 now — and lost a fumble.

He was also ineffective as a scrambler, totaling just 27 yards on 12 rushing attempts. The ‘Cocks sacked Dobbs twice.

His completion percentage (57.1) is the lowest of his career. Of the eight QBs in the conference with double-digit scoring passes, his TD-to-INT ratio (15-to-11) is the worst. Simply put, Dobbs has regressed.

It may be unfair to put the entirety of the blame on Dobbs’ shoulders. His offensive line has been bruised and battered all season long. The punishing ground game he was supposed to have — where have you gone, Jalen Hurd? — never materialized. Seemingly half of the starting defense is in a full-body cast.

Nevertheless, Dobbs is on the short list when discussing the most disappointing players in the league this year.

Meanwhile, South Carolina signal caller Jake Bentley was 15-of-20 passing for 167 yards with a pair of touchdowns and zero turnovers. While Dobbs is an experienced senior, Bentley was a true freshman making his second start ever.

In no way, shape or form should Bentley be outplaying Dobbs. The former was on pace to redshirt and watch senior Perry Orth eventually give way to fellow freshman Brandon McIlwain — he was the most heralded passer recruit in town, not Bentley. The latter was supposedly a fringe Heisman Trophy candidate at Media Days.

Beyond Dobbs, the problems run deeper for Tennessee. Hurd’s disappearing act is hard to explain. Even if he did find the end zone once, he ran for just 16 yards on 8 attempts vs. a Gamecocks rushing defense ranked 10th in the league. 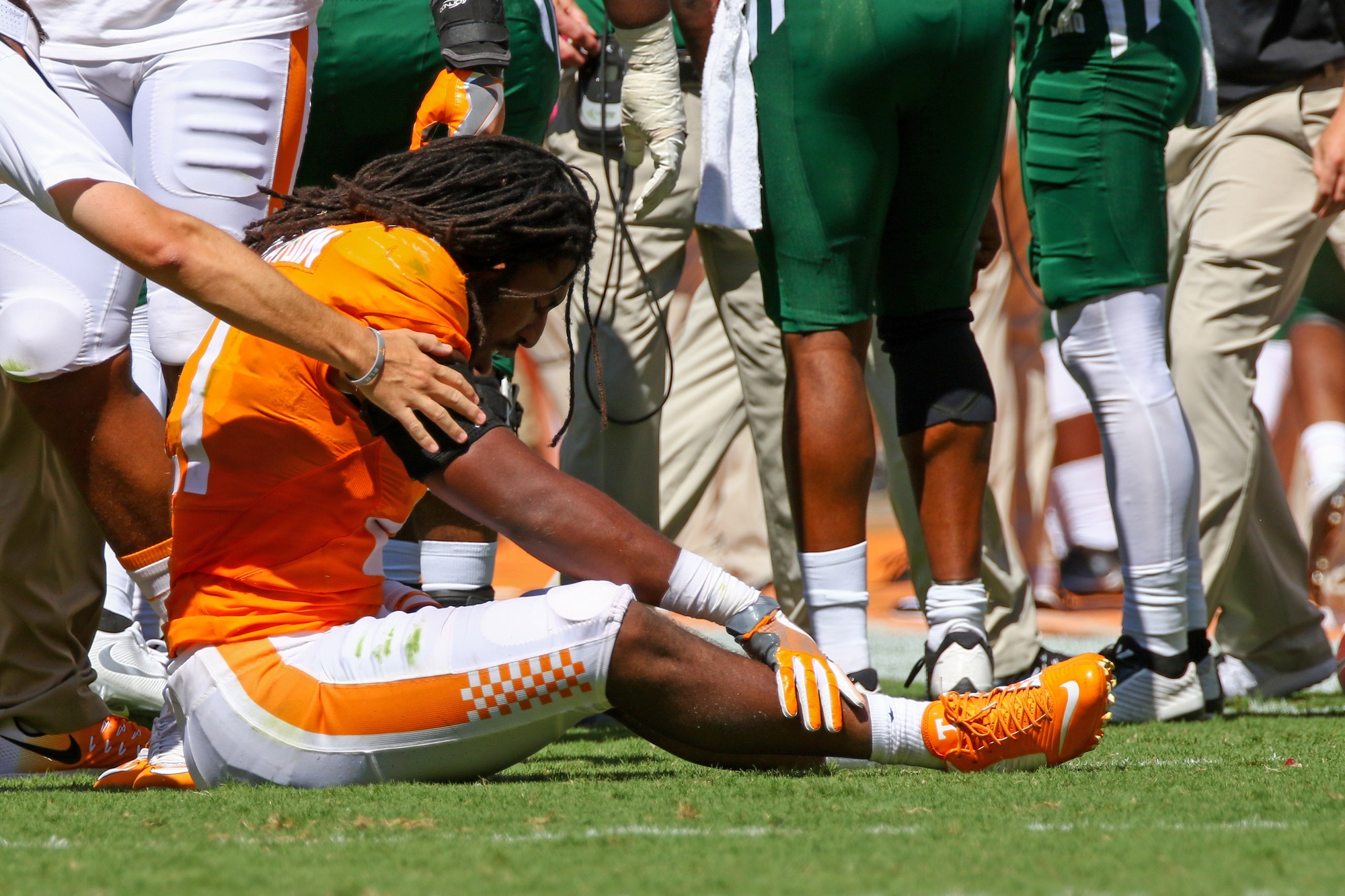 Defensively, the Volunteers have run out of capable bodies. Jalen Reeves-Maybin (above), Darrin Kirkland Jr., Cameron Sutton — these are All-SEC performers that have missed so much action this season. Jones may have stopped discussing injuries with members of the media, but this team has been snakebit like few others.

Of course, if Jones did discuss injuries during his post-game pressers, there’d be no time left to talk actual football.

Mathematically, UT is far from eliminated. Florida isn’t off the hook, either. That being said, now the Gators have some margin for error. They no longer have to sweep the rest of their SEC opponents in order to secure Atlanta.

Florida is far from steamrolling toward the conference championship game. As a matter of fact, the Gators haven’t beaten a ranked opponent yet. This past Saturday’s victory — border war or not — was over a UGA squad that’s presently 4-4 and recently lost at home to Vandy. These Dawgs don’t have much bite.

But with the Vols throwing up on themselves in Columbia, UF can lose to either Arkansas or LSU and still make it to the Georgia Dome.

So let’s say the Gators get wiped out by both the Razorbacks and Tigers. That’s hardly an implausible scenario. Fayetteville can be a tough place to play in November. Death Valley under the lights is no joke, too.

Still, even if that does indeed happen, why should we have any faith that UT can hold up its end of the bargain? Kentucky, Missouri and Vanderbilt are harmless enough on the surface, but so was South Carolina. The current team that just lost to the Gamecocks might not be appreciably better than the Wildcats, Tigers or Commodores.

It was supposed to be smooth sailing for Tennessee in the East this season. Instead, life on Rocky Top is rockier than ever.