If it was not coaching, it had to be a lack of motivation.

After a rash of injuries, particularly to wide receivers and tight ends, South Carolina sits at 4-6 with games at Texas A&M and Clemson remaining following Saturday’s shocking 20-15 loss to Appalachian State.

For a team that was promoted last summer as the deepest and most talented of any under coach Will Muschamp, a few week-to-week injuries have certainly derailed the season. There again has been a revolving door at running back, but on Saturday, it appeared the offensive line couldn’t get any push. South Carolina must now beat Texas A&M in College Station and Clemson to reach a bowl.

Losing out would leave the Gamecocks at 4-8 with what was supposed to be Muschamp’s best team. It would also restart the hot seat talk, if it ever really went away after the Georgia upset.

“We felt good about being able to run the ball. We didn’t do a good enough job of blocking up front,” Muschamp said. “We got stalemated on the line of scrimmage by a smaller defensive line.”

App State now has two Power 5 wins after it earlier beat North Carolina, which handed South Carolina one of its losses.

“We felt like we had a great plan of how to attack their run, and our guys played with great effort,” App State coach Eliah Drinkwitz said. “We tackled better than we’ve tackled all season. … It was a tough draw, especially after last week’s loss to have to come on the road to an SEC opponent, and nobody flinched.” 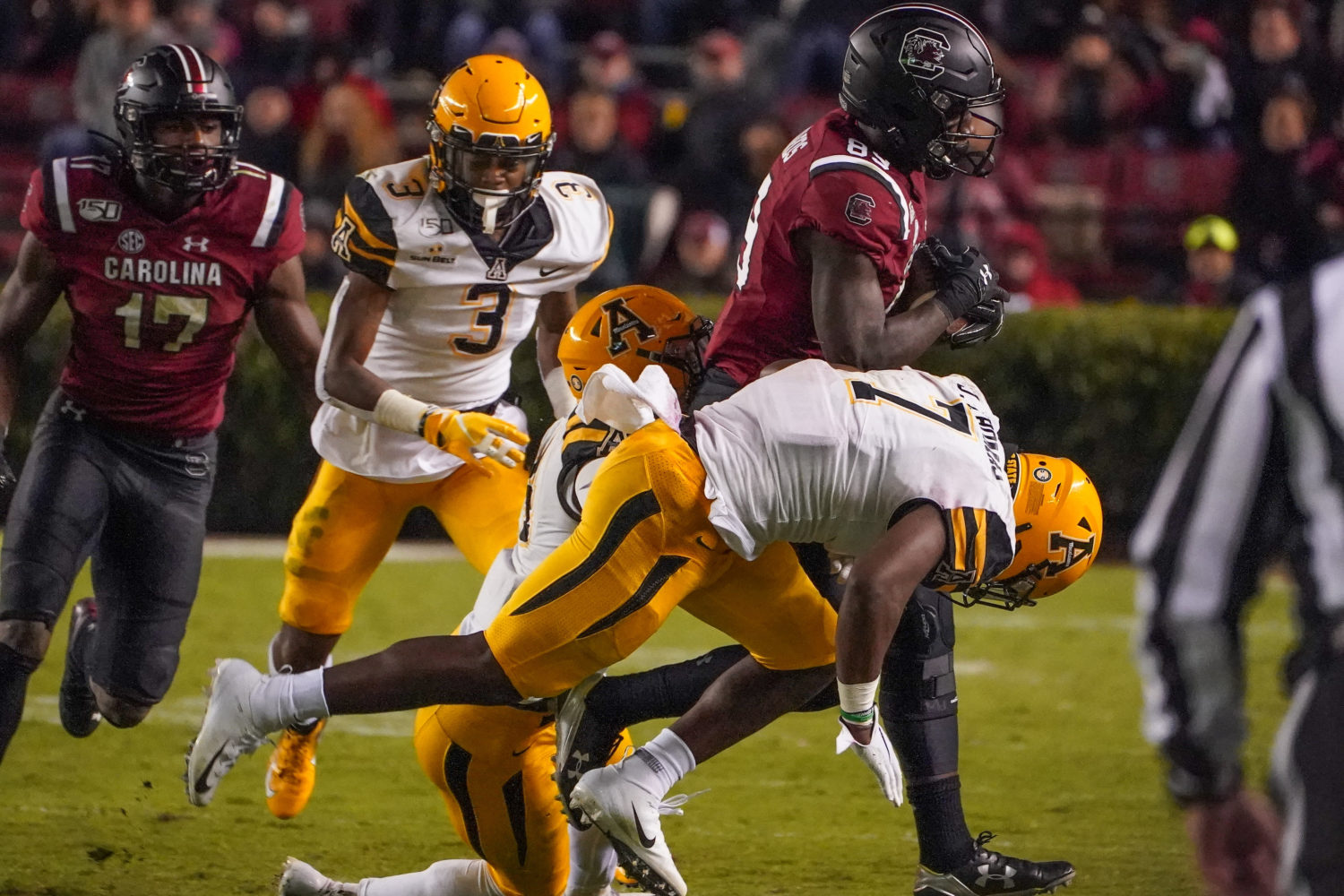 For the South Carolina passing game, it appeared to be a combination of quarterback Ryan Hilinski throwing the ball too hard and the receivers having a case of the drops.

The fourth-quarter comeback only made the game a microcosm of the season. Where was it all game? How do you reconcile the four wins being Charleston Southern, Kentucky, Vanderbilt and Georgia? Talk about a wide spectrum of talent.

The loss again overshadowed a record-setting day from Edwards, which is a weekly event and an unfortunate reminder that he deserves more.

With a 23-yard touchdown reception in the fourth quarter, Edwards became the Gamecocks’ all-time leader in receiving yards. He finished the game with 3,045. He also extended his school-record streak with a catch to 48 games. Edwards has 71 receptions on the season, the fifth most for a Gamecock in a single season. He is one behind Sidney Rice, who had 72 in 2006.

Muschamp maintains that there is strong leadership in the locker room, and that the team will re-focus and not let this carry over into next week’s game. Texas A&M is another one of South Carolina’s annual opponents that has a winning streak against the Gamecocks. In this case, it’s five games.