Texas A&M takes its No. 9 AP ranking and puts its undefeated record on the line Saturday when it travels to Williams-Brice Stadium to take on a South Carolina team riding a roller coaster under new head coach Will Muschamp.

While the Aggies have passed their first four tests of the season, looking improved with each victory, the Gamecocks seek consistency and some respect. Installed as an 18-point underdog for its SEC home opener, South Carolina is 1-0 at home this season, defeating East Carolina, 20-15.

Here’s how this 4 p.m. ET kickoff shapes up head-to-head:

WHEN TEXAS A&M HAS THE BALL

Trevor Knight vs. South Carolina pass defense: Knight continues to look comfortable in Noel Mazzone’s offense. Exuding leadership on that side of the football, Knight is third in the SEC in passing, averaging 263.8 yards per game. 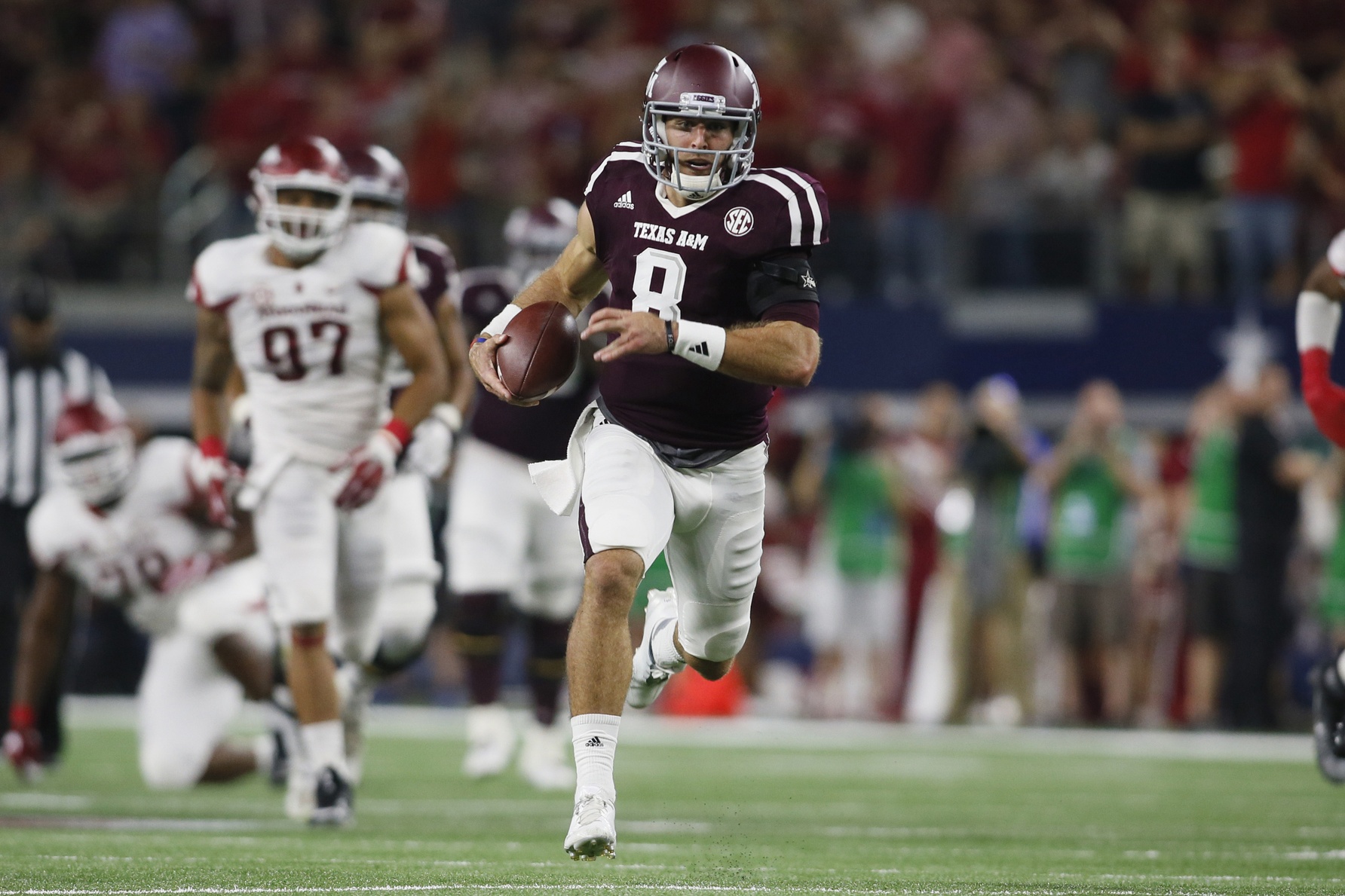 However, South Carolina is second in the SEC in pass defense, yielding just 200.8 yards per game. Only Florida (145.3) allows fewer passing yards per game in the SEC. It’s strength against strength, and as in baseball where a tie goes to the runner, the edge goes to the quarterback in this instance.

Texas A&M running backs vs. South Carolina run defense: Here’s where the Aggies can take full advantage of their strength, and perhaps with it, open up the passing game. Texas A&M leads the SEC with 269.3 rushing yards per game. Yes, you heard that right, the Aggies lead the SEC in rushing. But you have to look down the list of individuals to find the Aggies’ leader. That’s because three players have more than 200 yards rushing already this season, including Knight (308). Trayveon Williams leads the Aggies with 389 yards rushing, fifth-most in the conference.

Texas A&M receivers vs. South Carolina secondary: Josh Reynolds will be the focus of the South Carolina secondary. Third in the SEC with 370 receiving yards, Reynolds is averaging nearly 22 yards per catch. But then what do you do with Christian Kirk or Ricky Seals-Jones, not to mention Speedy Noil? It’s a receiving corps that’s been hard to get a handle on for defenses, and Saturday’s game appears to be no exception.

WHEN SOUTH CAROLINA HAS THE BALL 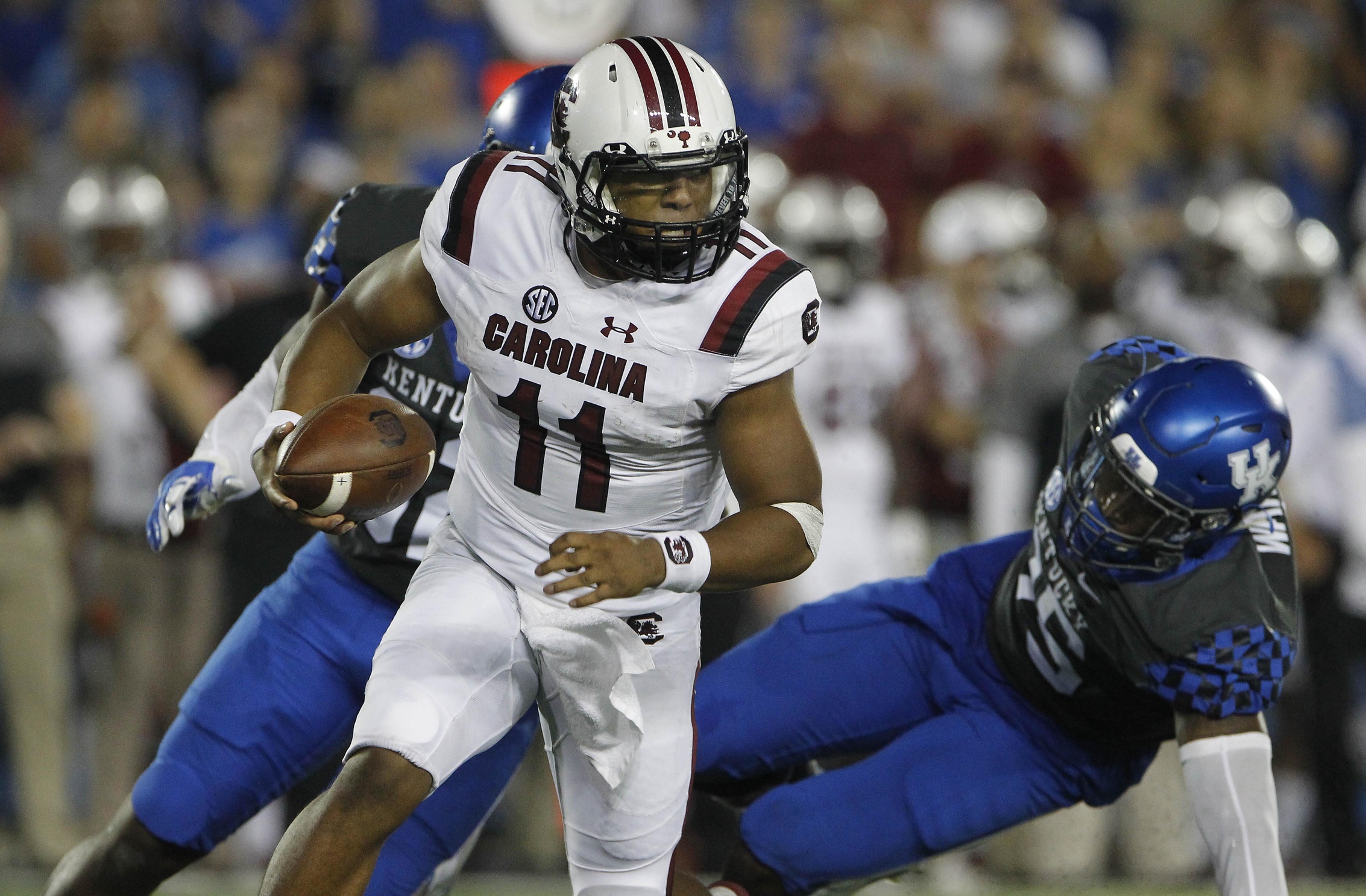 The good news is that while he may be on the bottom looking up, McIlwain has taken care of the football at least. In 91 pass attempts so far this season, he has yet to throw an interception and has tossed two touchdown passes, both vs. Mississippi State.

South Carolina running backs vs. Texas A&M run defense: A year ago, this would be a different story. But in 2016, the Aggies are actually stopping the run. They rank fifth in the SEC against the rush, giving up an average of 128.3 yards per game on the ground. That’s a vast improvement over the 213.7 yielded last season. To make matters worse, South Carolina is last in the SEC, averaging only 90.8 rushing yards per game this season. Freshman A.J. Turner leads the Gamecocks on the ground with 157 yards in 2016. That ranks 27th among all SEC rushers.

South Carolina receivers vs. Texas A&M pass defense: Freshman Bryan Edwards and sophomore Hayden Hurst give South Carolina’s passing game its only semblance of life. The two have combined for 36 of the Gamecocks’ 67 pass receptions for the season. Together they have 435 of the team’s 768 receiving yards with zero touchdown catches. The Gamecocks have a league-low two touchdown receptions this season.

The Aggies are second in the SEC, averaging 19.8 yards per punt return while South Carolina is 12th in the conference with a 4.3 return average. But the Gamecocks have a secret weapon in Turner, who leads the SEC by averaging 30 yards per kickoff return. He will be tested against Texas A&M’s return defense, which ranks third in the SEC while giving up just 17.4 yards per kickoff return.