Dallas Cowboys vs. San Francisco 49ers will wrap up the NFL’s divisional playoff round on Sunday evening in Santa Clara.

The 49ers got to this round by beating Seattle in the wildcard round. Dallas took care of business against Tom Brady and the Tampa Bay Buccaneers last week.

Over at Underdog, there are ways to get in on the action by making fantasy player over/under picks for the big game between the Cowboys and 49ers.

What is Underdog and why should fans care?

Through Underdog’s “Pick’em” contests, you can bundle a few selections of player prop picks similar to what you find at sportsbooks and put real money against those picks.

My picks for Cowboys vs. 49ers

Let’s start with the 49ers, who many (including me) think will win this game and advance to the NFC Championship Game. That would be an incredible story considering the 49ers are starting Brock Purdy, the 2022 NFL Draft’s “Mr. Irrelevant.” Purdy has yet to lose as a starter and will be favored against the Cowboys.

Why do I like the over there? Well, it has a lot to do with San Francisco TE George Kittle. He wasn’t used much against Seattle, recording only 2 catches on 2 targets. But to end the regular season, he was playing some of his best football of the year.

His over/under is set at 4.0 receptions. In the final 5 games of the regular season, Kittle recorded 22 catches, snagging at least 4 passes in all 5 games. He also had 7 touchdown catches in that time frame. I like the “higher” option on Kittle’s catches against the Cowboys.

Moving on to the Cowboys, let’s discuss QB Dak Prescott. The Dallas QB is coming off of one of his best outings ever, throwing for 305 yards and 4 touchdowns, while rushing for another score, in a win over the Buccaneers.

This week, he goes against an elite San Francisco defense, so I’m not particularly comfortable betting on any of his yardage or TD totals. But I think the Cowboys will be playing from behind for much of the game, which means they’ll have to throw early and often. I like Prescott’s “higher” option for 34.5 pass attempts. I think he’ll approach, if not exceed, 40 passes by the time all is said and done on Sunday evening. 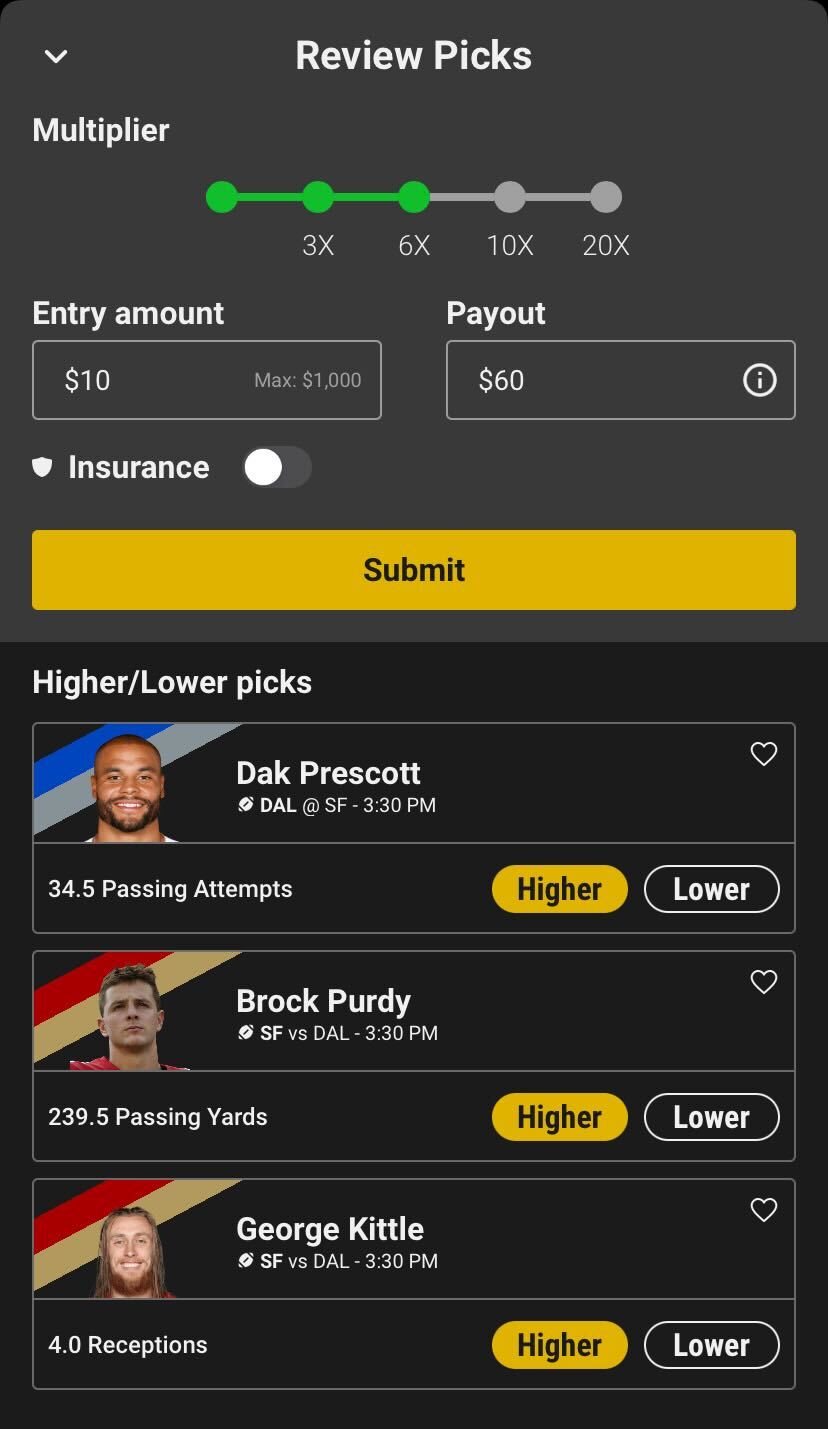 No matter who wins, this should be a great matchup between 2 legendary NFL franchises. Get your bets in before kickoff on Sunday evening!

Get started on Underdog by clicking here and make your picks for Cowboys-49ers or other CFB, CBB, NFL and NBA games. Using this link means Underdog will match your deposit up to $100. If you deposit $25, you’ll get an extra $25 to start playing right away.

Adam Spencer
A 2012 graduate of the University of Missouri, Adam now covers all 14 SEC football teams. He is the news editor at Saturday Down South and across all Saturday Football brands. Follow on Twitter.